Sassan Behnam-Bakhtiar: a dialogue across time and space 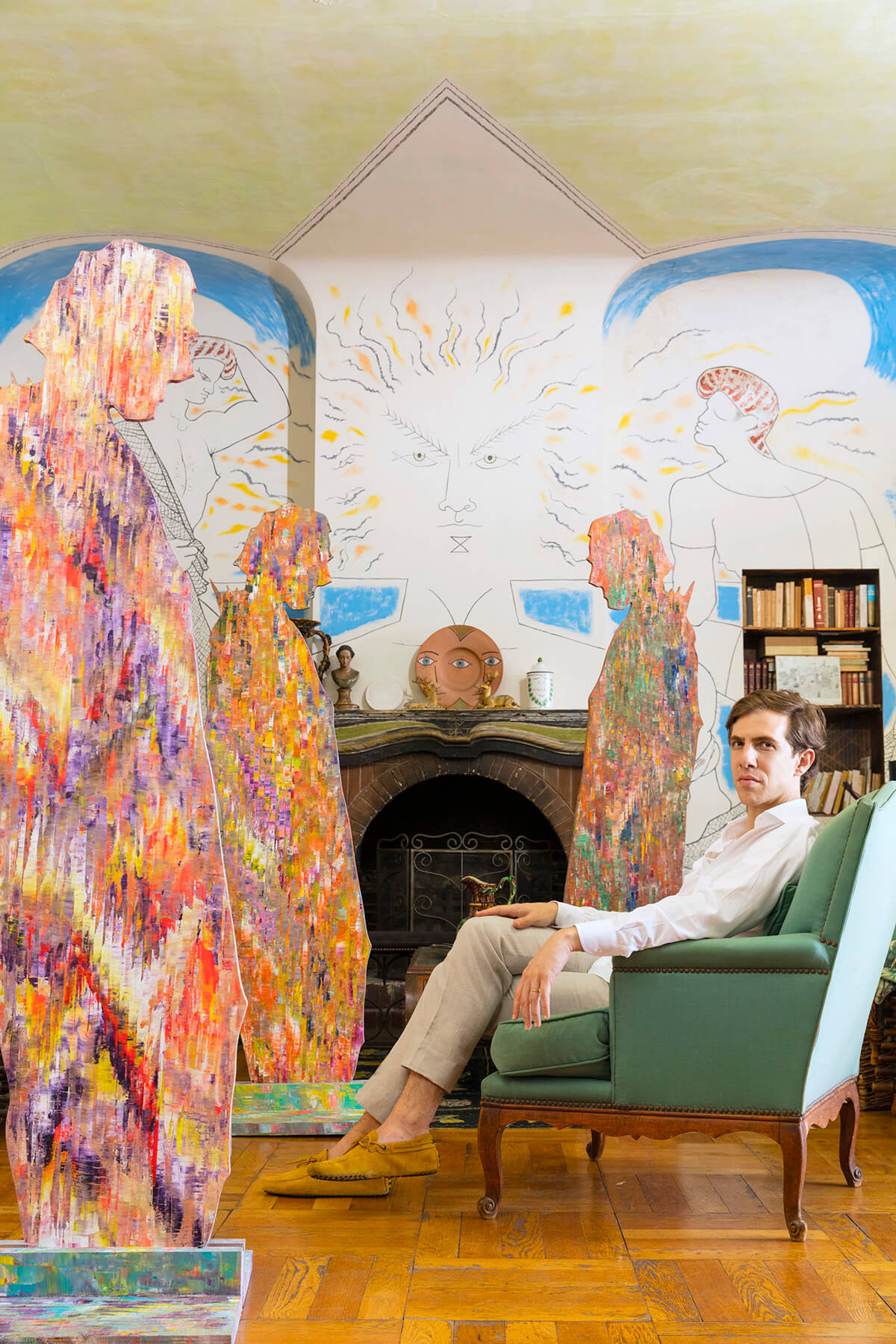 When artist Sassan Behnam-Bakhtiar came across a 1960s film by Jean Cocteau, he was stunned to discover they were both addressing the same ideas in their work. Virginia Blackburn meets him to discuss his new exhibition – set in the Saint-Jean-Cap-Ferrat villa that’s full of Cocteau’s creations

Art is the international language: it speaks to the soul, not needing to utilise any mother tongue, and that communication is about to manifest itself in a major new exhibition in the south of France. It speaks across generations, too, to fellow artists and connoisseurs. And this is what happened when the French/Iranian artist Sassan Behnam-Bakhtiar chanced upon a video made in the early 1960s by Jean Cocteau entitled Jean Cocteau Speaks to the Year 2000. “It was an inspiration,” Behnam-Bakhtiar says. “He was talking about the same things as me: that humanity is on the wrong path. That it is too robotic rather than humanised. That the global system is against wellbeing and health. Jean Cocteau was talking about this in 1962 and saying, ‘Hopefully you guys will have opened your eyes up to it by now.’ And when I saw it, I thought, ‘Oh my God.’ And that’s how it started.”

The ‘it’ he refers to is his latest solo exhibition: Oneness Wholeness with Jean Cocteau, housed in the beautiful and plush environs of Villa Santo Sospir at the southeastern tip of Saint-Jean-Cap-Ferrat, Cocteau’s home for over a decade. Saint-Jean-Cap-Ferrat is also where Behnam-Bakhtiar is now based. Following on from his recent highly successful Oneness Wholeness exhibition at London’s Saatchi Gallery from May to June this year, this follow-up is designed to carry on a dialogue with Cocteau, quite literally in some ways. Cocteau and his circle, which included Picasso, Matisse, Coco Chanel, Greta Garbo, Vaslav Nijinsky, Charlie Chaplin and Marlene Dietrich among many others, are very obviously the inspirations behind the work: Behnam-Bakhtiar has created two metres of sculptures of the historical figures who passed through the villa following Cocteau down to the beach. Does Behnam-Bakhtiar feel himself to be very much part of the tradition of the numerous artists who made this scorchingly beautiful part of the world their home? “Emotionally I’m very happy and excited to be here as a fellow French artist,” he says. “But it is also very upsetting because if Cocteau were here now he’d be so upset that we’re in an even worse state than we were when he made the video. These are the core values and beliefs in the work.” In truth, although Behnam-Bakhtiar is often referred to as a French/Iranian artist, he is considerably more than that. Born in the middle of the Iran-Iraq war in the Parisian suburb of Neuilly-sur-Seine in 1984, the young Sassan lived in France until he was 10, after which the family returned to Tehran. The rest of his childhood was spent in the land of his immensely distinguished fathers – the artist can trace his heritage back to Iran’s ancient Bakhtiari tribe through his mother Firouzeh Bakhtiar-Bakhtiariha, while his great-grandfather General Gholam-Hossein Khan Bakhtiar (Sardar Mohtashem), was Iran’s minister of war. His grandfather Abdolhamid Bakhtiar was a Majles deputy, while the late Iranian Prime Minister Shapour Bakhtiar and General Teymour Bakhtiar were two of his great-uncles. Through his father, he is a descendant of the Qajar monarch Ahmad Shah. A stint at the American University in Dubai followed his time in Tehran, before moving back to France with his wife Maria Zakharchenko to obtain his MBA at the International University of Monaco.

This joint European/Middle Eastern influence has given Behnam-Bakhtiar an insight into both cultures and beyond: he prefers the description “citizen of the world without boundaries” and has spoken often of his desire to bring a new focus to work from the Middle East. Since springing on to the art scene in 2009, he has become a hugely successful international presence, with exhibitions all over the world and his works selling through Bonhams and Christie’s and other major auction houses. He has now set up the Fondation Behnam-Bakhtiar in Saint-Jean-Cap-Ferrat, as well as an art gallery in nearby Monaco, which shows Iranian artists alongside other international names. And he is very clear about the influence Iran’s artistic history has had upon his own work. “In terms of influence, the Persian cultural heritage is vital,” he says. “When I was a kid in Iran, I went around with a camera and a sketchbook, around all the famous cities in Iran – Shiraz, Isfahan, of course Tehran. I focused on all the architectural sites and they made me what I am today. There is a huge legacy from Iran.”

But it is the new exhibition that has been engaging him of late. “Oneness Wholeness is a very personal body of work that started about seven years ago,” he explains. “I was going through a very difficult time in terms of my health and so I began to focus on energy, everything that connects us to everything, the universal language. This was merely a beginning, and at the start I couldn’t decide whether to put it in front of an audience as it was so personal.” The work ended up at solo show drawing on thousands of years of Iranian culture, employing ancient Persian motifs, patterns and landscapes to create huge mixed-media paintings calling to mind the Zagros mountains in south-west Iran that are still home to the Bakhtiari tribe. Now the work will progress further in the Villa Santo Sospir. Behnam-Bakhtiar is based in Saint-Jean-Cap-Ferrat, where his new exhibition is taking place

However, Behnam-Bakhtiar is keen to emphasise that his vision is not based solely on the circumstances of his upbringing. “I do have two different cultural backgrounds,” he says. “But something within me has been present ever since I was a young kid back in Iran. I would look at the world and ask what is wrong with it on a human level. A seed was planted in me back then.”

Like so many before him, Behnam-Bakhtiar chose to base himself on the Côte d’Azur because of the extraordinary natural qualities of the area. “It is a very special place for any artist,” he says. “I chose to reside here because of the natural beauty, the light, the sea and the energy. In coming to France I was coming back home and it feels right – a person has to listen to a gut instinct. I was lucky to be able to feel these extra things.”

Behnam-Bakhtiar professes to feel marvellous today, in marked contrast to the events of seven years ago that eventually led to the recent body of work. He is reluctant to go into too much detail, but explains, “I felt ill due to emotional pressure when a series of events led to my health deteriorating seriously. I started doing things such as Kundalini meditation in order to be able to find myself again. When I finally got out of the cage or trap, I wanted to tell the world about it. I talked to my family and friends and the work came about very naturally – it was not forced or planned, it just happened. Saatchi related to the values I was talking about and the same thing happened at the Jean Cocteau Museum. A lot of things are very wrong with our way of life and more people understand that.” This process of self-discovery has continued: last year Behnam- Bakhtiar opened his third eye, which entirely changed his take on life. Back at Villa Santo Sospir, another element of the new exhibition is a sound installation, a literal dialogue between the two artists, as they will be talking to one another, their voices echoing through the beautiful building covered with the work of Cocteau. Behnam-Bakhtiar sounds as excited as a child when he talks about it. “I thought a sound installation was a very interesting idea,” he says. “Cocteau was residing here for years so he had a huge connection to the place. When I started to research his work, how he lived and what he did, this huge connection came about. The owners of the museum said, ‘This is too good a match.’ I’m very proud to be able to continue in his footsteps.”

This is especially significant because Sassan Behnam-Bakhtiar will be the last artist to exhibit in the Villa Santo Sospir as it is in its current state. After the exhibition the villa will be closing down for restoration by the interior designer Jacques Grange, while the grounds will also be renovated by landscape architect Madison Cox. But this exhibition, as with all his work these days, is informed with a mission to change the very way in which people think. “One of the biggest issues is for us as humans to understand that we are so much more than we think we are,” he says. “When I realised this, I changed as a human being. My DNA changed. We need to move forward, to be different, to live lives in a different way, to reach different levels of life. When you look at the world today, it’s very easy to get depressed, but you still need to live day after day with love and I apply that even to the people who hurt me. I used to be very angry with people who hurt and mistreated me, but you have to realise you must treat people with love. Things have been created to divide races and countries whereas we are all brothers and sisters really. Life is not about conflict.”

Behnam-Bakhtiar’s own health issues have had a huge bearing on this, of course. “I have been given a gift to live with a purpose,” he says. “Don’t forget the beauty of life. If you’ve had big health issues, you realise it’s silly not to walk on the beach and enjoy it. Anyone can be wise but you have to trigger that. My ultimate message from this exhibition is that you have to transcend as a human being. Understand you have to change life for the better. Stop being zombies. It is a spiritual revolution we are looking for now.”

The Villa Santo Sospir is placed, appropriately enough, on the avenue Jean Cocteau in Saint- Jean-Cap-Ferrat. This is where, according to local lore, Cocteau was invited to spend a week’s holiday by its owner, the socialite Francine Weisweiller, in 1950 and ended up staying for more than a decade. It was a wise move on her part: previously the interior was all whitewashed walls, but Cocteau asked whether he could draw the head of Apollo above the fireplace in the living room, and went on to cover the entire house with his art. For most of his frescoes, Cocteau was inspired by Greek gods and mythical creatures, but he also referenced images of the Riviera, such as fishermen and their nets. Cocteau called it the “tattooed villa” and later said: “When I was working at Santo Sospir, I became myself a wall and these walls spoke for me.”

Famous artists of the Riviera

With its beautiful scenery, extraordinary light and pleasant climate, the French Riviera has long been a draw for famous artists. Cézanne was the first to arrive in the 1880s, but many others soon followed: Claude Monet, Henri Matisse, Edvard Munch and poor, haunted Vincent van Gogh, who was based in Arles. Pierre-Auguste Renoir moved there for the light and bought a home in Cagnes-sur-Mer, which he turned into a studio for his Impressionist paintings. Chagall lived in Saint-Paul de Vence, as, briefly, did Picasso: it is said that he stayed at the Colombe D’Or hotel and traded paintings for meals.

Watch Jean Cocteau Speaks to the Year 2000, the short film that inspired exhibition: