Every city wants its own High Line. Designing an urban park that sits cheek by jowl with super-prime real estate is a difficult task, and the benchmark is the 1.45-mile-long repurposed structure that runs north from the once run-down – nay, degenerate – Meatpacking District in Manhattan. So, when Adrian Cheng (son of Hong Kong billionaire Henry Cheng and executive vice chairman of real-estate behemoth New World Development) was looking for someone to transform the world-famous but tired TST waterfront area of the Kowloon Peninsula into a 21st-century destination for recreation, he turned to James Corner of Field Operations. Corner is perhaps the world’s most celebrated landscape architect right now – the man behind the engineering of the High Line, as well as the new Domino Park on the Williamsburg waterfront in Brooklyn. After six years of work, Kowloon’s Victoria Dockside – which has already taken significant shape and is scheduled for completion late next year – looks set to offer a new gold standard for urban planning.

“The High Line was an epic success,” says Corner, without any hint of a self-congratulatory tone. “It is much-loved by people from all over the world.” At the same time, he sees the High Line as something unique to its Manhattan context, flanked by landmarks and the neighbourhoods of the Meatpacking District and Chelsea. It can’t, he believes, be duplicated. “Every city does seem to want its own High Line,” he says, “but other cities should better evaluate and imagine how public spaces can be designed for them that are authentic to, and resonant with, their own contexts. With the Hong Kong project, all we did was simply amplify the power of the existing context – improving accessibility, designing places to sit and linger, and provide shade. The new design will recall many characteristics of the old TST, while pointing ways forward to its future.” Corner first visited Hong Kong in the 1990s, the decade that saw sovereignty handed from the UK to China. If there was any worry that the handover would stem growth on the island, it was misplaced – this continues to be an electrifying hub of culture and commerce, developing at an incredible rate. Corner started work on the US$2.6billion, three-million-square-foot New World Development project in 2012, and has been visiting every 10 weeks since then. “The city has always appeared vibrant and cosmopolitan to me,” he says. “But even more so in recent years, especially now that it is actively shaping public access and space around the harbour front, investing in new cultural facilities, and prioritising liveable, walkable and sociable city space.”

For years, the Avenue of Stars on the Kowloon waterfront has been on every tourist’s list of must-dos in the city. The statue of Bruce Lee here has been photographed as much as the light show that bursts into to life across the skyscrapers of the CBD on the other side of the harbour. But, as waterside thoroughfares go, it’s hardly up there with the pleasures of the Southbank Centre in London or Sydney Harbour. It was never somewhere you’d want to linger – particularly when heat and humidity hit typically intolerable levels. “We have improved access to shade with numerous trellises, trees and other canopies,” explains Corner. “The experience will be richly varied, fun and engaging – it is social, global, spectacular and at the same time humanising, fun and special.” Looking at renderings of it from above, it mixes inside and outside elements with graphic élan. It will redefine the look of the city.

Read more: Bruno Schöpfer, Managing Director of the Bürgenstock Selection, on the future of luxury hospitality

One of the many things that makes this project so different from other urban park commissions with which Corner has been involved, is Adrian Cheng, an art patron and gallerist as well as a developer. He has a unique fluency in the language of urban culture. While there’s already a fully operational 15-floor limestone-and-bronze office tower at the new Victoria Dockside (Mizuho Bank and Taipei Fubon Commercial Bank were two early adopters of the space), and a revenue-spinning hotel and shopping complex with a glass corridor at the heart of the masterplan, there will also be a sunken amphitheatre with curved glass walls surrounding it, and a constantly changing collection of public art on view. One of the first pieces to be installed when the project is finished next year will be Elmgreen & Dragset’s Van Gogh’s Ear – a swimming pool turned upright, deep-end down, originally installed at the Fifth Avenue entrance to the Channel Gardens at Rockefeller Center in New York City in 2016. It will, inevitably, be photographed with the same fervour as the Bruce Lee statue. 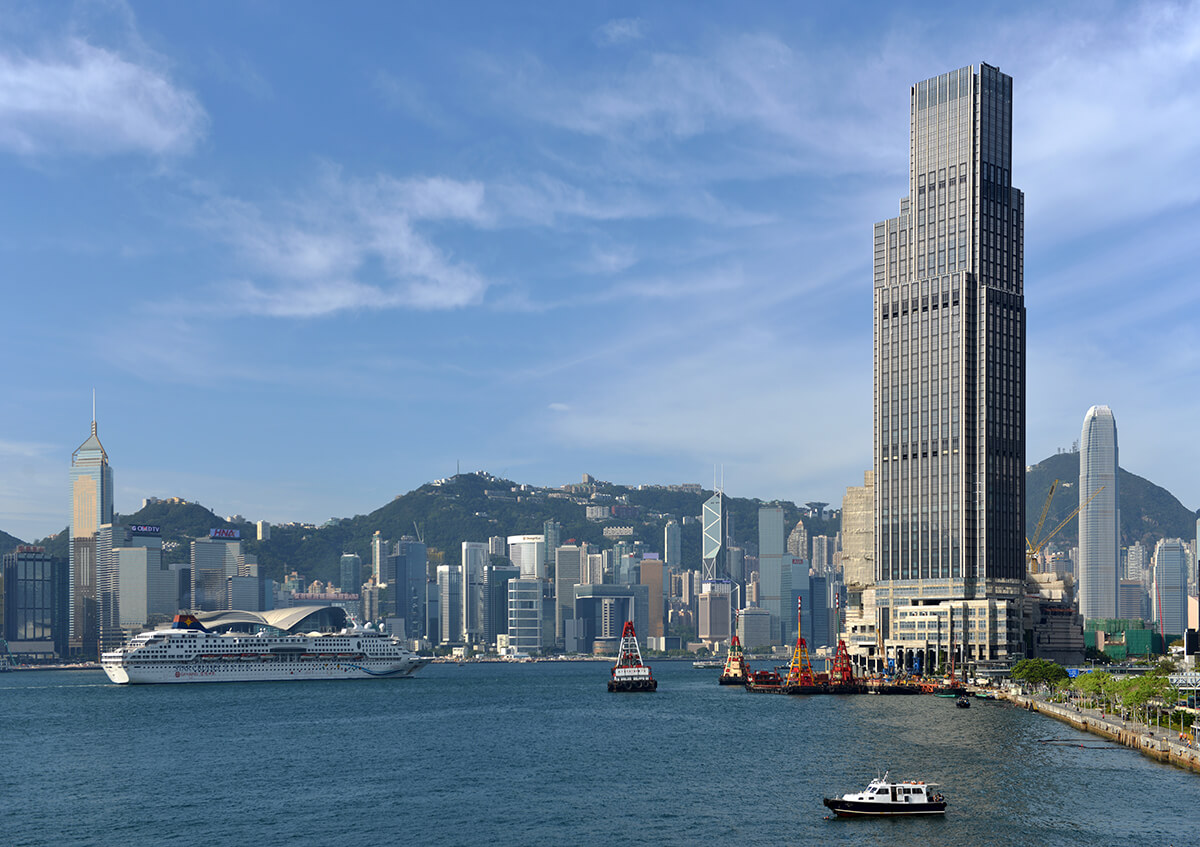 The aforementioned shopping complex has its own cultural agenda. Christened the K11 Musea, it takes its name from the K11 Art Foundation that Cheng founded in 2010, and which he continues to head. Like the new Whitney in New York, it has incorporated numerous terraces into its design, which stops it looking like a hermetically sealed institution. Instead, the green layered spaces that punctuate the elegant, rounded architecture bring human and plant life to the skyline. The K11 retail complex will host live music, exhibitions and numerous other cultural events according to Cheng who, in addition to his cultural responsibilities in Asia, sits on the board of the Museum of Modern Art PS1 in New York and is a member of the International Circle of Centre Pompidou. “Adrian is a true visionary and inspiration,” says Corner. “He is of course a developer and his primary business is development for both retail and lifestyle, but his passion is art and culture, so he works very hard to bring richly textured practices of art and culture to his development projects. This is why he is so passionate about the outdoor public spaces – these are not simply frontages to his development, but more active platforms for social life, for civic engagement, public participation, art and culture. His vision is civic, generous and inclusive.”

Read more: Why you should be staying at the Park Hyatt Paris-Vendôme this September As far as the dynamic of the public outdoor spaces of the new Victoria Dockside goes, there are valid logistical parallels with the High Line. “Like the project in New York, it is tightly dimensioned,” explains Corner. “But we were still able to provide spaces to sit, gather and look at views, and plantings to provide colour and shade, as well as water features and lighting for dramatic effect and art for social enrichment.” The two projects also share an issue in terms of the choice of the greenery. By its very nature (being essentially a raised, elongated platform), the High Line had a very thin allowance for soil. “We used a planting palette that is robust and attuned to those kinds of conditions,” he says. “The same is true in Hong Kong, where we do not have ample soil, but we do have stress from sun, heat and typhoons – so again we needed a careful planting palette with adequate maintenance and oversight.” The result will look perpetually fresh, green and inviting.

One may wonder for a moment, in a global city where every square inch has to wash its own face financially, what the quantifiable value of recreational space is. At a time when you can shop online and choose to work remotely, it may in fact be priceless. Traditional urban office and retail space is undergoing a global reboot, and Victoria Dockside is a particularly stylish example of the phenomenon. It offers a profoundly pleasurable experience. “Cities are economic machines,” says Corner, “and the new Victoria Dockside significantly improves economic value, while at the same time enhancing public space experience for everybody. Parks, squares, gardens, courts, terraces, promenades, waterfronts and so on, are fundamental to improving the liveability, sustainability and social equity in our cities. These are investments that only add value. It is a win-win – a transformation for both the economy and the people.”