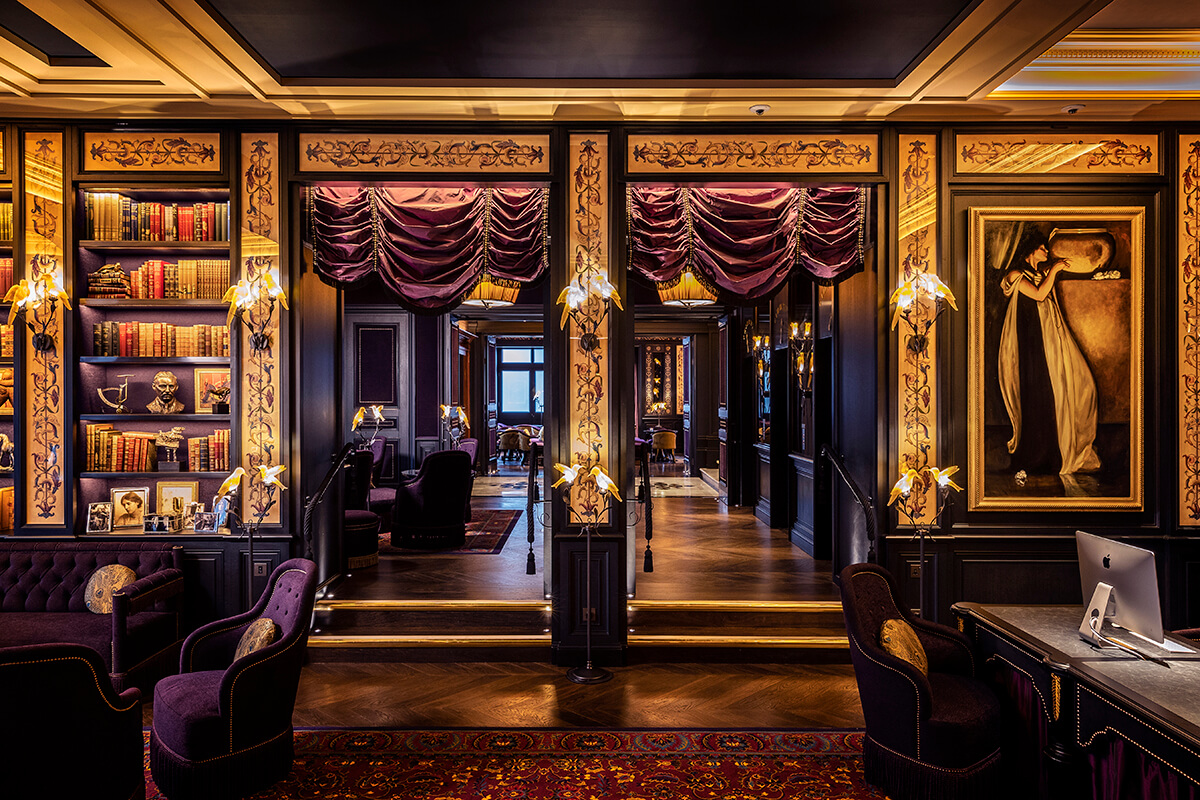 L’oscar is named after and inspired by writer Oscar Wilde. The hotel sits in the heart of London’s historic literary neighbourhood Bloomsbury

Jacques Garcia is the master of decadent design. His portfolio includes the likes of Hôtel Costes in Paris, La Mamounia in Marrakech and NYC’s NoMad. Now the French designer is bringing a touch of Parisian style to London with luxury boutique hotel, L’oscar. He talks to LUX about Oscar Wilde, alluring atmospheres and the importance of low lighting

LUX: How did you come up with the concept from L’oscar? What’s your creative process like?
Jacques Garcia: Although I’ve had many proposals to do concept design projects in London, L’oscar is only my second public project in the city after Ronnie Scott’s. What particularly seduced me about this project is the fact that the building has a history, it was a former [Baptist Church]. I had to think of ways to work with the structure of the existing building and its history, whilst incorporating modernity through colours and fabrics.

So for the decor, I imagined that I was Oscar Wilde. Twenty years ago, I created Hotel des Beaux Arts, where I imagined Oscar Wilde’s last bedroom when he was living in Paris. I imagined it as if he lived in a very nice apartment, although in reality he was very poor at the end of his life. I was interested in showing the paradox of the writer’s glory and achievements, and the way he was treated by people for his personal convictions at the time. I returned to the story of Oscar Wilde for this hotel because he is someone that I am continually drawn to – the name of the hotel, of course, is in his honour: L’oscar (the Oscar). LUX: Did the building present any design challenges?
Jacques Garcia: Yes, it was very difficult to work with and it took a long time. It was like doing a hotel in New York. London and New York are two of the most difficult cities to for hospitality projects, especially when you’re working with buildings that are listed or historical. But when I like a project, I’m like a kid and even if it takes 9 months, I still love it at the end.

LUX: Why do you think Parisian style is so desirable?
Jacques Garcia: For a very simple reason: no one ever speaks about the sexiness of the London girl, but everyone always talks about the sexiness of the Parisian girl. This is because the Parisian girl is an attitude, whereas there’s a certain rigidity to the English and also an elegance that the French don’t have. But the English, in my opinion, are missing the attitude. That’s the allure. LUX: You once said that “before everything, I am a creator of atmosphere.” How do you go about creating an atmosphere?
Jacques Garcia: Personally, I am not a big fan of public spaces. I am very lucky to have an extraordinary house and friends who have extraordinary houses so in my personal life I have no real reason to go to public spaces like a hotel – unless it is to meet and to be seduced by people. People go to public places meet other people, and for me, that’s the starting point when considering atmosphere. I create places where people can meet and seduce. That begins with choosing comfortable chairs, the right lighting. People look better in dim light, always.

LUX: Your designs often incorporate opulent fabrics – where do you source your materials?
Jacques Garcia: I used a lot of fabrics in L’oscar particularly, but since the peacock was the emblem of Oscar Wilde, I wanted to utilise that pattern and used special fabrics sourced from England and France. Mixing colours, especially unusual colours, was very important for me in this project, which is difficult to do, if you do it wrong, you risk the design becoming kitsch. It’s a very thin line, much like a haute couture collection – sometimes it can just work, it can be incredible and sometimes it doesn’t.

LUX: How much of a consideration is sustainability when designing?
Jacques Garcia: I recently went on a trip to Saudi Arabia. I was in the middle of the desert and there was air conditioning, but a natural system of air conditioning that was used in the old desert houses of 12th century: windows! And of course, the way the house was structured to keep it cool. The projects I work on are different to this. For example, I use a lot of fabrics. Think of my older hotels like the Costes or the NoMad. People are coming into those hotels from 7am to 3am, they are using the seats for working or socialising 20 hours a day and so the fabric wears out and you have to change the upholstery. In that way, it’s not really sustainable. I would love to be more sustainable, but there are also regulations I have to consider such as fire. Plastic treatment on silk is unfortunately mandatory. To use real silk or real corduroy would be more ecological, but unfortunately we have to have the fabrics treated. I hope that businesses will integrate sustainability into their day to day operations once the project is complete. L’oscar, for example, have started by avoiding the use of plastic straws. 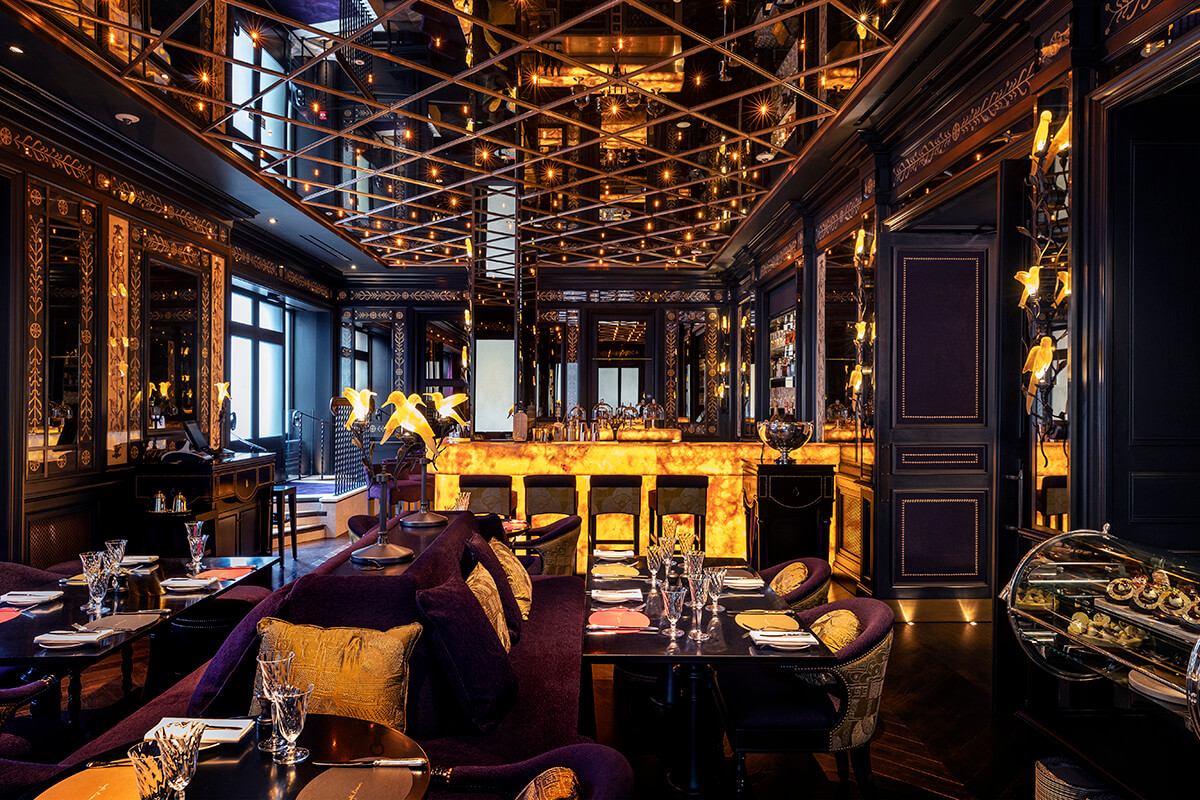 The walls and ceilings of the Café L’oscar are lined with mirrors, gold panels, and original art.

LUX: Which hotel design(s) are you most proud of?
Jacques Garcia: As well as L’oscar, my favourites are The Mamounia and La Réserve in Paris. My house, the Chateau du Champ-de-Bataille, is also one of my favourites!

LUX: And can you tell us about your upcoming projects?
Jacques Garcia: I have a hotel opening soon in Singapore, a private house in Rome, there’s a hotel in Rome as well. There’s a very big hotel in Doha. Private residences in the Gulf. A new NoMad has recently opened in Los Angeles. There are a lot of projects going on!

LUX: What’s your favourite city in the world?
Jacques Garcia: Paris. Why? Because the Parisians.