Mayfair is so 2012. The future of London retail, art, cuisine, and trends, is east, on the grimy streets of Shoreditch, Hoxton and beyond. Kitty Valentina Harris selects her favourite boutiques and also quizzes John Skelton, founder of cult Dalston fashion store Late Night Chameleon Café, on the secrets of his success

‘Not on your Nelly!’ Even the name, rhyming slang for life, oozes cool and conjures intrigue like the treasure chest that the gallery is. Located in a small pocket of East London, Nelly Duff was brought into the world by Jessie Dyer and Cassius Colman to serve a purpose. Its calling: ‘to exhibit emerging and explosive talent.’ They buy the artwork that evokes an emotional response and pieces ‘that will feather the nest that is their home’. The lino-cut work of Baltimore’s social muralist Gaia and Obama’s favourite Ben Eine are a few gems cloistered in this truly original and precious artistic hub. nellyduff.com 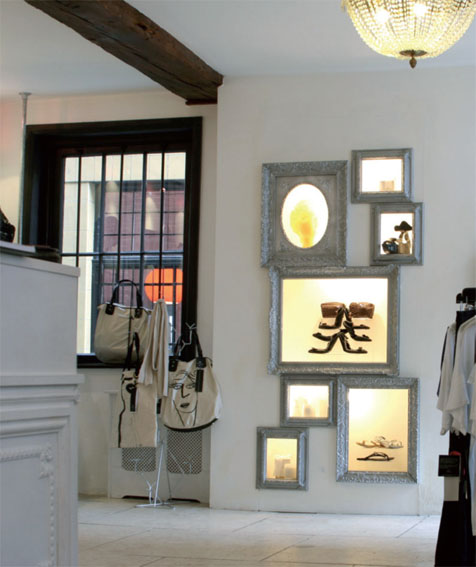 I Boundary, where London and Paris fashions meet

Born and bred in East London, Debra Winstanley dreamed of owning her own boutique. Spotting a niche in the market for a womenswear store, 11 Boundary is now ‘a chic London boutique with a Parisian edge.’ Filled with diverse and exciting labels, the store is refreshing to wander around in. When she buys she goes for ‘versatile pieces that are wardrobe staples.’ Her perfect customer would be Keira Knightley or Sienna Miller as she already stocks lots of the labels they wear. Labels range from Tom Ford sunnies to American Vintage. 11boundary.com

Tatty Devine is all about fun to wear, original design jewellery

In 1999 after graduating from Chelsea School of Art, Harriet Vine and Rosie Wolfenden came across a bin liner of discarded leather and decided to create their own cuffs to sell on a market. Now their shop in Brick Lane is ‘fun, original and all about jewellery.’ They look for pieces that are different and that excite them and ‘more importantly things they want to own.’ Currently they are focusing on Tatty Devine’s own collection. In celebration they throw a party in traditional Holi Style from which everyone emerges covered head-to-toe in powder paint. tattydevine.com

Present, from retro to the latest in men’s fashion

On entrance Gwilym, the world barista champion, is there to hand-pull you an espresso and while you wait one can flick through an issue of Monocle or take in the fantastical, fanciful smells of their candles such as one titled ‘Mars’. Further into the store the walls are adorned with one off items collated from around the world. The sophisticated and fun shopping arena houses both international and British brands such as Bass Weejuna leather shoes and Hartford clothing. Founders of the new age store, Steve Davies and Eddie Prendergast, balance their stock with both established and niche brands. It captures oldschool retro with new school swarve bringing men’s fashion into the present. present-london.com

Start Store is the latest edition to Start’s growing empire

Where to begin? One has to choose where they wish to start; in the newest addition to Mrs Brix and Mr Philip Start’s: Mr Start’s store empire, in the Suits Store, in Start for women, or in Start for men across the street. Start cherry picks their buys with items from designers such as Helmut Lang and Rick Owens, and if you are puzzled how to piece them together, don’t panic! All the staff are trained stylists. Coming in July is the Mr Start Woman AW13 range; expect structured slim fit trousers with soft, plush jumpers and elegant overcoats. The bonus of a visit to the shop is meeting the fashion famous Gladys and Pixie. These are Brix’s (who was a guitarist and lead singer respectively in post-punk cult bands The Fall and The Adult Net) precious pugs that were the faces of the Christmas scarf last year. start-london.com

A Child of The Jago

Expect the unexpected is generally a good mindset to approach this store with. Founded in 2007 by Joseph Corre and Simon ‘Barnzley’ Armitage (who has now left for Peru) it resides in a former Victorian slum and is described as ‘a child of the street. The destitute and illegitimate progeny of a hopelessly rundown environment.’ ACJ seeks to cause trouble while it interrupts the status quo of menswear with high quality garments ruling over pre-packaged trends. Made in Britain, in nearby Clerkenwell, these pieces are limited and unique as they are dependent upon the length of the different British fabrics they source. achildofthejago.co.uk 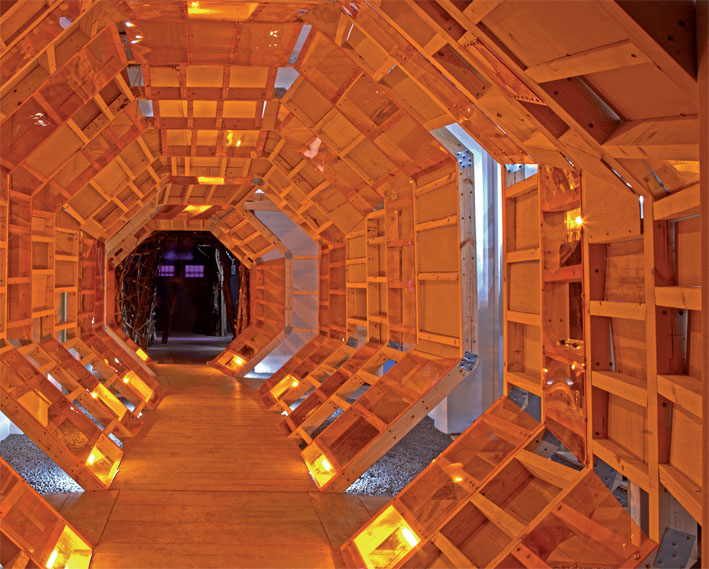 The Tunnel at LN-CC

A hybrid of creativity and determination that is rapidly becoming a global discovery icon, Late Night Chameleon Café is an evolutionary anomaly in the retail biosphere. Its arena is the up and very becoming Dalston and its camouflage is a cave like structure in what appears to be a derelict building. The benefit of such a misleading exterior: one is transported to another realm of outspoken luxury. LN-CC’s cofounder John Skelton became Selfridges’ youngest buying team member at age 20 before moving to Harrods two years later. Now as LNCCs Creative Director, Skelton takes a birds eye view and hands-on approach to styling shoots, market perception and brand direction. LN-CC.com

Where does the name Late Night Chameleon Café come from?

John Skelton: LN-CC stands for late night chameleon café. The name comes from a variety of places, and is kind of tongue-in-cheek but at the same time is a true reflection of how we came about and what we are about also. The idea of LNCC was born over many late nights, mostly music related and just coming up with ideas in the early hours and developing them through the very early hours over the course of years I guess. I like the idea that a chameleon is constantly changing and is such an interesting creature and we had always planned to have a library, a club, and a café so it just stuck. It just felt right, and it still does.

Why did you choose Dalston for LN-CC’s home?

J.S: Dalston is a place where most of us were living or have lived over the past 8 years, and when we decided to launch LN-CC it was a very natural choice. Even though there was nothing around here three years ago when we secured our space, we knew the area was ready for something like LNCC. In the last year the area has exploded with new stores, bars, galleries and restaurants opening up weekly. Initially people told us an appointment only space carrying some of the most expensive products in the planet would never work in a run down area like Dalston. We believed in it and it’s been an incredible ride.

Now revamped how would you describe the vibe at the hub that is LN-CC? J.S: I think the beauty of LN-CC is the simplicity of what we are doing. Yeah, sure our store may be seen as a concept store however I don’t believe what we do to be overly conceptual, or conceptual at all for that matter. I’ve spoken about this with Dan (Mitchell) the other half of the creative here at LN-CC and our concept essentially is to put all the things we love whether it be clothing, music, books etc in an environment that is interesting to us. That is quite simply our concept. The good thing about us is that we get bored very easily so were always looking to progress, create, re-create and keep moving the project forward from all angles as to keep ourselves interested. The vision is quite simply that, to excite ourselves, as if we can do that then you will excite and interest others also.

How has your original vision changed over time?

J.S: I don’t think the vision has ever changed, we have just evolved and moved things in the direction that feels right at as we develop. Our main aim is to keep pushing things forward and keeping everything we do on the front foot as to push not just our concept forward but retail in general.

With LN-CC in mind and on a broader scale where do you see the future of retail going?

J.S: Retail is quite simply in the hands of retailers and it can go anywhere they want to push it. At the moment it is very easy to make an impact and do something new and interesting as the mass majority of retailers’ offerings are so safe that there is a lot of room and scope for development in the sector.

Which designers do you see leading the way?

J.S: It’s hard to say really. The future of retail is about carving your own niche, a world for people to come and get inside. The formula for that is to put your own selection of brands together in a way that is personal to you and then to develop the customer base as you grow. This therefore means that you will benefit from doing something different as opposed to just selling the hot brands of the moment.

Which designers do you currently carry and can you tell us a little bit about them?

J.S: In terms of brands that I think are in a good stage of development and will become more relevant for the future, I think Yang Li is currently leading the pack. For a new designer his production and fabric choice is second to none and has a very strong idea of where his brand is going. I also have to say that I think JW Anderson’s womenswear is developing into a really strong brand and will be a force to be reckoned with going forward. 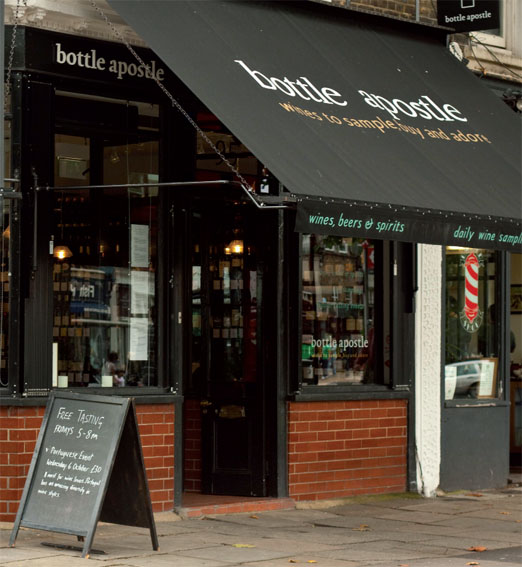 Bottle Apostle, one of the city’s finest independent wine shops

JOHN SKELTON’S SELECTION OF MUST SEES IN DALSTON

This restaurant has been set up by 2 young (very nice) Spanish couples who have a real love of food/wine/culture. The food is delicious, very interesting yet refined Spanish cuisine, and the wine list is great also. It obviously has a great selection of Spanish wines; a lot of them on the front foot but offers the best of the French and Italian staples also. In the basement they have a space that they use for more cultural events and have done all kinds of things from independent film screenings, offbeat music projects, etc, etc. trangallan.com

Restaurant For those who know the area and are into food then they will obviously know about this place, but if you don’t, then you should go. You’ll need to book a few weeks before. The food is (in my opinion) the best Italian food you will eat in east London and as a full package is amazing. The staff are friendly and knowledgeable, the atmosphere is relaxed and very comfortable (ask if you can have a table upstairs; downstairs feels a bit like sitting on a dancefloor full of tables as the lighting isn’t quite right) and the wine list is diverse, extremely well considered and not crazy expensive. They do however have a specials wine board which has more expensive and really good staples and experimentals. trullorestaurant.com

This wine store in Victoria Park is a great little independent. It covers everything from the best of the Italian and French (which it does extremely well) but also has some very interesting Portuguese, Swiss, Hungarian and many more that are very well edited and curated. They also have supper clubs downstairs with guest chefs and wine pairings which are really good also. bottleapostle.com