The Michelin-starred Belmond Le Manoir aux Quat’Saisons restaurant, run by chef Raymond Blanc, is at the forefront of the culinary arts with its cookery school and Gaggenau kitchen, as Mark C O’Flaherty discovers

Few things attach a date to drama on film like a scene set in a character’s kitchen. It might be a can of the 1970s diet cola TaB on the counter, or a style of cereal box with typography that hasn’t been seen for decades. It’s also the hardware – is it a faux country kitchen in the suburbs, or is it someone pulling out a ready meal from a panel of flashing lights in 2001: A Space Odyssey? Our kitchens tell the story of our lives, and the way we live today. No space in the home has changed more in the past 20 years.

“More than ever before, we see the dinner table as the most important medium of communication,” says Raymond Blanc, the French chef behind the two Michelin star Belmond Le Manoir aux Quat’Saisons in Oxfordshire, incorporating a restaurant which has, for the past 35 years, been one of the top special-occasion destinations in the UK. “The media has helped change our connection with food and our health and the environment. It was all separate before. Now we know it is linked, and a home-cooked meal made from scratch is so much more important – a way to bond with your clan, your family, your loved one. We are more emotional about food today. And what we are eating is changing, too. We eat seasonally because it tastes better, and we are eating less meat, because we know about climate change.” 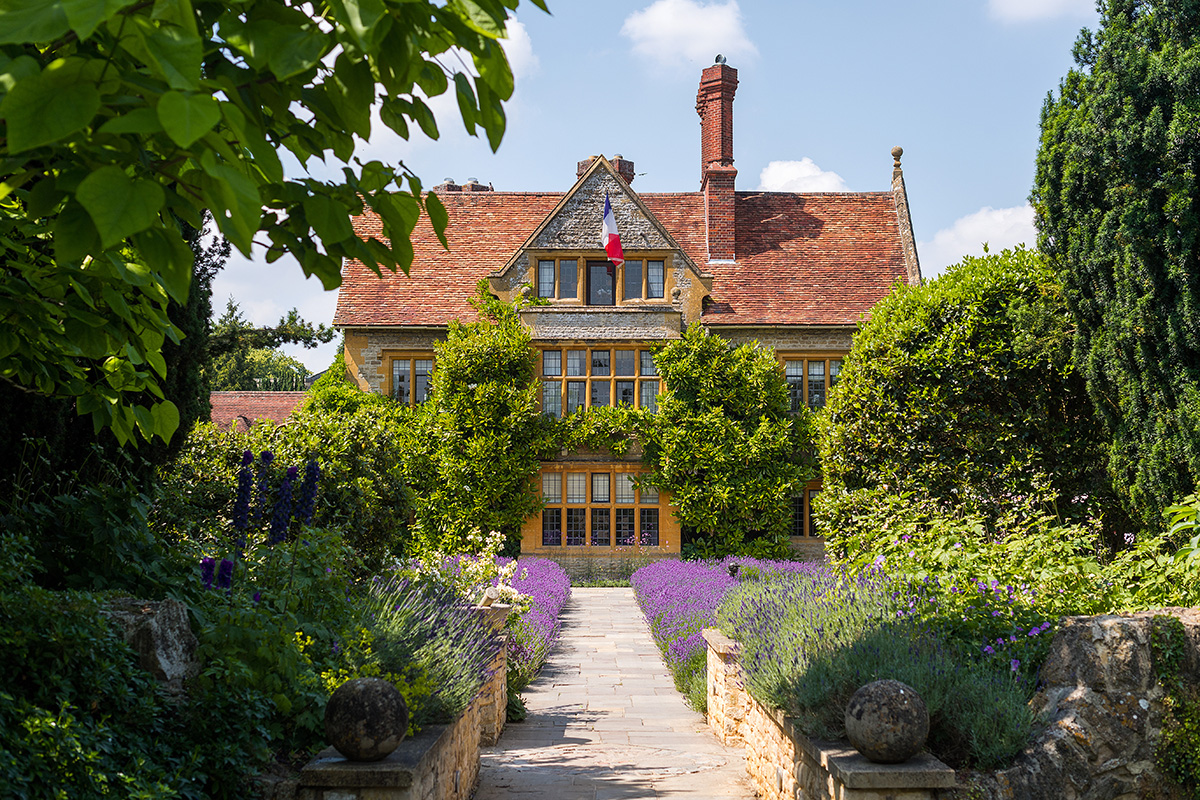 Blanc’s comment about food being more emotional can’t be overstated. While our interest in fashion has cooled somewhat, with a glut of identikit global brands and crass merchandising, food has become something of an obsession. It fuels social media, with information about chefs and niche new restaurant openings shared like precious insider intel. We have taken that obsession home with us, buying up cookbooks by some of the world’s most avant-garde chefs, full of the most ambitious techniques. We have upgraded our kitchens to match those ambitions. “What we have done now is to domesticate the professional kitchen tool,” says Sven Baacke, head of design at Gaggenau, the German manufacturer of some of the most advanced and design-conscious kitchen hardware in the world. “It is something I call ‘traditional avant-garde’.” Sitting in his studio in Munich, with a panoramic view out to the snow-capped mountains of Bavaria, Baacke talks through some of the objects on his desk – pieces that inspire him to create the modern kitchen: “Designers are collectors,” he says, “so here in our studio I have a lot of different things to take ideas from.” One of the most unusual objects is a mouse trap. “I collect them,” he explains. “I am inspired by how many ways there are to catch a mouse, and the ingenuity in each different design of trap. I also collect pocket torches, because I am fascinated by all the different solutions people have come up with to carry a light around with them, and to fashion that particular tool.”

A lot of what Baacke has developed in Munich has ended up in Blanc’s hands in Oxfordshire, and Blanc – as a chef who cooks the way we now also want to cook at home – can predict where the domestic kitchen is going, and how it will look. He is the kind of chef who Baacke is designing for, and the influence trickles down to the home. “If you looked at a domestic kitchen in the 1970s,” says Blanc, “you’d find a microwave and a nasty little cooker with a twin gas range, and a tin opener close by. That was it. It was sad, it was grey, it was barren. And if you were wealthy, you would have an AGA, which warms the house but is impossible to cook with. Today, our kitchens are beautiful and polished, in stainless steel and Corian. They look exciting.” Blanc’s dream kitchens – which include what he has at home, in his cookery school in Oxfordshire and, of course, at Le Manoir aux Quat’Saisons in the same building – are defined by hardware that offers performance along with technology. “I want the same thing at home as I do at work,” he explains, “durability and precision and immediate power. And modern cuisine needs an environment conducive to cooking, with all the gadgets possible. I want multi-functions, I want to steam, use dry heat, wet heat, and a mix. I want to cook sous-vide.”

If home kitchens have been transformed by our appetite for dining out and by chefs’ ravenous hunger for adventure, then the arrival of the vacuum drawer in the home – which can be used for marinating, storage and of course sous-vide cooking – is a quintessentially 21st- century moment. Just as we saw the pressure cooker and the deep-fat fryer dominate the landscape in the 1970s, today’s more food- literate consumer wants protein that has been cooked to retain moisture, and to have all its flavour quite literally sealed in. Essentially it is futurist poaching, cooking with vacuum-packed ingredients, but the results, even with a simple carrot, have been revelatory in the restaurant. Now we want that at home. “Cooking this way is extraordinary – you seal the ingredients without any air, so there is no cross contamination as you’d get when you marinate in the fridge. You have such succulence, and you lose no flavour at all in the cooking.” It is part of the legacy of molecular gastronomy, which Blanc sees as a low point for restaurant culture, but which he also believes has left us with a radical and exploratory approach to cooking which is a positive thing. “It’s like nouvelle cuisine in the 1970s,” he explains, “which was great, but which was ruined by the media and the way they portrayed it. We still learned a lot from it.”

Read more: Massimo Bottura on his Michelin-starred restaurant and Food for Soul project

Induction cooking has been another revolution in the domestic and professional kitchen – something which Blanc has only recently shifted to at his restaurant. “When we had the open gas ranges, it was torture to stand in front of them because of the heat. Now with induction cooking, there’s none of that waste of heat, or all those flames literally roasting you while you work.” Unlike previous electric hobs, induction gives the immediate power and precision that a chef needs, so it’s a viable alternative, and overall improvement, on gas. Another change in how we use our kitchens is coming from social trends. The meat-and- two-veg way of cooking looks set to disappear from our lives in the near future. Veganism has long ceased being a fad. “When I opened my restaurant 35 years ago, I had a five- and seven- course vegetarian menu,” says Blanc. “No one wanted it. That’s totally different today. And the situation is irreversible. It takes 16,000 litres of water to provide 1kg of beef. Eating meat contributes so much to greenhouse gases. I have no problem in cooking vegetarian food – when I was growing up, we only had meat maybe four times a week – including steak frites on Saturday and rabbit on Sunday – and everything else was vegetarian. My mother made wonderful, delicious food from vegetables.”

How will this movement manifest itself in the kitchen of the future? Sven Baacke at Gaggenau believes that it will be about our ability to access and keep, as much as prepare, food. “When you buy more fresh fruit and veg, you want to store it in a better way,” he says. “Will we be having things delivered weekly? Will meat become something just for special occasions? I think it could be that being able to eat a really fresh apple will become as special as taking a bottle of fine wine out of the chiller. Digitalisation will see supply become something that happens at a very high level – a very luxurious level. The supply chain will become much better than it is today.”

And what of the technology that isn’t available yet? What will the kitchen of the 2030s have? Trends will continue to come from the way chefs are cooking professionally, for sure. “Methods such as teriyaki, and cooking with steam, those are now high-end domestic but come from restaurant culture,” says Baacke. “I think the social aspect of cooking will develop. I think appliances will become less visible, and we will want to cook together but remotely. We will be able to be in the kitchen together, even if you are in LA and I am in New York.”

As for the actual preparation of food, Blanc has one wish, something that chefs who wear glasses when they work will empathise with the world over: “I would love to be able to open an oven door after roasting something, and not be blasted with the heat from inside. And you know what? Kitchen technology is moving so fast, it’s probably just around the corner.” In an age when we are valuing experiences over objects, a cookery class voucher is a welcome gift. Raymond Blanc’s cookery school in Oxfordshire is just across the hall from his bustling kitchen that serves Le Manoir’s restaurant, but the ambience is markedly different. Here is the kitchen of your dreams, fully equipped with state-of-the-art Gaggenau hardware in fine wood cabinets. The school channels Blanc’s culinary DNA through its director, Mark Peregrine, who is Blanc’s right hand at Le Manoir, with bakery courses taught by Benoit Blin. “We have been so ahead of the curve with the school,” says Blanc. “We were the first to offer courses for children, and we have always taught vegetarian cooking.” A full day’s cookery class here has become a popular bolt-on to an anniversary stay with dinner at the hotel, offering a fully immersive foodie experience along with an afternoon spent among the artfully plotted crops in the garden (which now offers its own school too). “This is such a great time for British cooking,” says Blanc. “It has developed such a new and unique style, and doesn’t come with the same baggage as Italian and French cuisine. When we first opened, it wasn’t really anywhere, but now look at what Benoit is doing at the school. This country is number five in the world for patisserie.”

This article originally appeared in the Summer 19 Issue. The Futures: A Token Of Goodwill