Eamon Ore-Giron’s monumental mural ‘Angelitos Negros’ (2018), shown at the 2018 biennial ‘Made in L.A.’ at the Hammer Museum in Los Angeles

No longer an outlier from the busy Europe– New York art corridor, Los Angeles is rapidly becoming a serious contender as a thriving hub on the world art scene. Janelle Zara looks at the people and places that are making the City of Angels hot, hot, hot

This autumn in LA, Ai Weiwei season is in full swing. The Berlin-based Chinese conceptual artist and political activist has not one but three major, concurrent exhibitions across the city – one at Jeffrey Deitch’s new Hollywood gallery, one at the Marciano Art Foundation and one at the new UTA Artist Space in Beverly Hills. With his LA debut coming three decades into his career, it prompts the question: all this time, has Ai been saving the best city for last?

The delay in Ai’s arrival to the City of Angels may lie closer to the fact that none of these venues existed before 2017: the Marciano Art Foundation opened in a defunct Masonic temple in May last year; the new UTA Artist Space, redesigned in part by Ai, opened in July; and his show with Deitch is the space’s very first. They’re part of the LA art scene expansion that is taking place at warp speed, one powered by a booming artist population and a corresponding wave of new galleries and museums.

For all of its recent history, Los Angeles has been anchored by powerhouse institutions: the Los Angeles County Museum of Art (LACMA); the Museum of Contemporary Art (MOCA); UCLA (where you could once take classes with the ground-breaking conceptual artist John Baldessari); and CalArts, where you can still take classes with the famous African-American abstractionist Charles Gaines (who is likely to come out and attend your exhibition opening). And yet, as far as the art world was concerned, history took place between New York and Europe. Like the rest of the world, Los Angeles was an afterthought, a home for surfers and movie stars. Seemingly overnight, however, it has become a world-class art capital. Recent years have seen major milestones that have put Los Angeles on the global stage: mega-collectors such as Eli and Edythe Broad as well as Maurice and Paul Marciano have opened destinations at which to showcase their holdings, courting the likes of Olafur Eliasson and Ai Weiwei to do their first major projects in LA. Major galleries, too, have opened LA outposts to be closer to their blue-chip artists. For Hauser & Wirth, that was Mark Bradford and Larry Bell; for Sprüth Magers, Baldessari and Sterling Ruby. And, of course, the inaugural Frieze LA, sponsored by Deutsche Bank, will take place in February 2019.

In September 2017, ‘Pacific Standard Time: LA/LA’ embraced the West Coast’s exclusion from the New York/European canon by emphasizing its connection to Latin America. ‘Pacific Standard Time: LA/LA’ was a blockbuster moment with its thematic syncing of more than 70 institutions. Curators, funded by The Getty, had the opportunity to travel to Latin America and relay the art narratives seldom told, some amassing as much as seven years’ worth of research. The results were powerhouse exhibitions such as MOCA Pacific Design Center’s ‘Axis Mundo: Queer Networks in Chicano LA’, a survey of art that emerged in the Gay Liberation movement of the 1970s, or the Hammer Museum’s staggering feminist 260-piece ‘Radical Women: Latin American Art, 1960–1985’. It’s one of the few shows to originate in Los Angeles and then travel to New York, rather than the other way around.

Where ‘Pacific Standard Time: LA/LA’ took place inside more than 70 institutions at once, the new biennial Desert X took place in none. The first edition last February took art-goers on an epic scavenger hunt across the Coachella Valley, where artists including Richard Prince, Tavares Strachan and Will Boone took over derelict buildings and made massive incisions in the sandy earth. Doug Aitken, who built a mirrored hilltop kaleidoscope the size and shape of a small suburban house, described the event as “a vast sprawling parkour… where suburbia ends and the landscape begins”.

In the 1960s, the Light and Space movement, with artists such as Doug Wheeler, James Turrell and Robert Irwin, was making experimental inquiries into sensory deprivation, visual perception, and the glossiness of automotive paint. In 2018, light and space are highly prized amenities that in cities such as New York and London are increasingly hard to come by. In Los Angeles, land of eternal sunshine, studio spaces are large, as is the distance between them (although lately rents have risen at an alarming rate). LA’s art scene is as vast as its geography, stretching from the shoreline into the mountains and out into the desert. See, for example, Doug Aitken in Venice Beach, Charles Long in Mount Baldy, and Andrea Zittel in the arid plains of Joshua Tree, where her collective practice revolves around survival in the desert.

It’s the kind of landscape that breeds autonomy, as exemplified by designer David Wiseman and his brother, former Guggenheim Deputy Director Ari Wiseman. After several years of David being represented by Tribeca-based gallery R & Company, he and Ari purchased and refurbished a 30,000-square-foot factory complex in LA’s Frogtown neighborhood where David could both produce and exhibit his work himself on site. Elsewhere along the LA River, French painter Claire Tabouret relishes the kind of solitude she could never enjoy at home. Inside her former industrial space-turned-studio, she spends “eight or nine hours inside not talking”, a real luxury in France, where you’re bound to bump into someone. For true peace and quiet, Tabouret also makes work in a small house she purchased in Pioneertown, a tiny Wild West city out in the desert with “no phone, no internet, no nothing”. 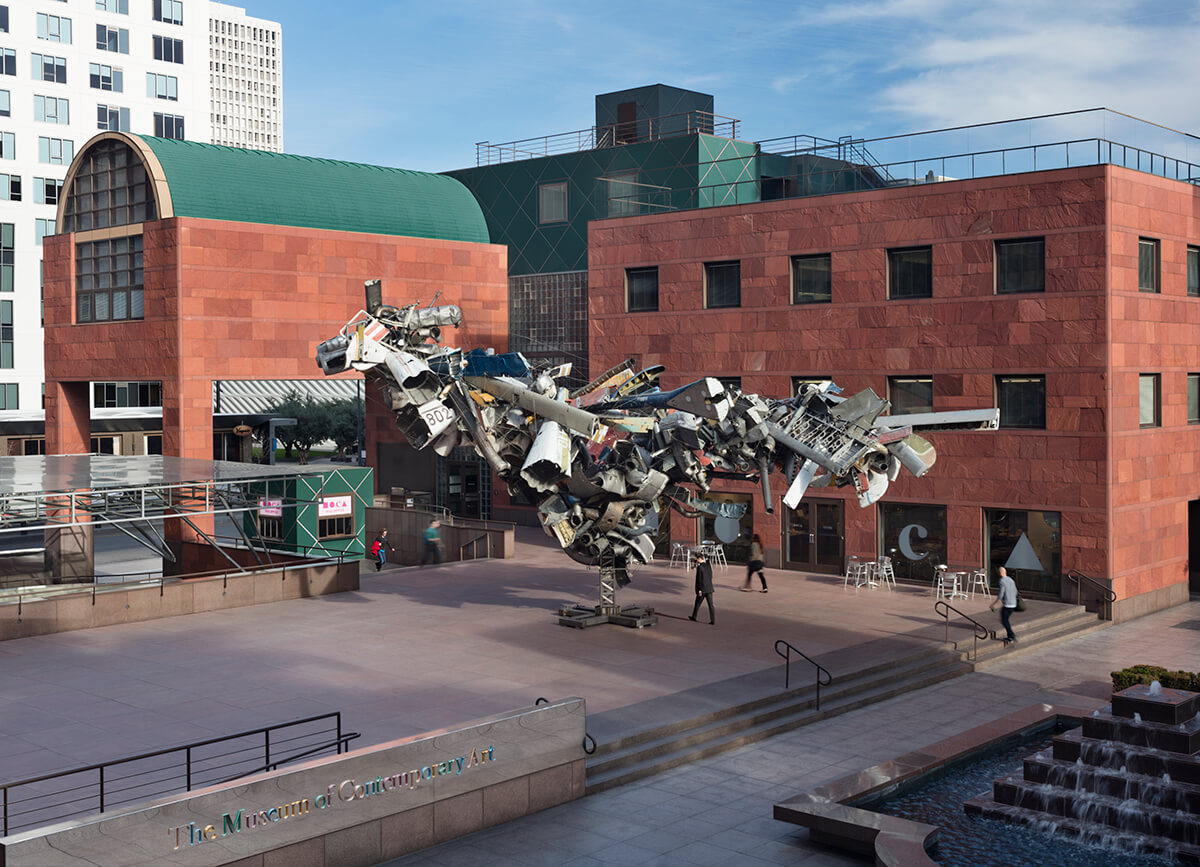 Solitude, on the other hand, is optional. Geographical barriers also breed tribes. There’s a conviviality rather than a competition among LA artists, particularly artists on the East Side who run spaces for other artists to show. From the Ruberta gallery in Glendale to the artist-run platform BBQLA downtown, openings are no formal affairs. Rather than white wine and polite conversation, you’re greeted by tacos and a cooler full of beer.

“I was surprised by just how small it feels compared with New York, but that also makes for a communitarian vibe,” says gallerist Kibum Kim, who moved to LA in early 2016. He’s a partner at artist Young Chung’s Commonwealth & Council (CwC), a Koreatown space Chung founded in 2010 and initially ran in his living room. Their work is less driven by the market than the desire to build communities, evidenced by the fact that Chung “didn’t make a sale for years”.

“Many artists we work with have practices that eschew the Western notion of the individual artist genius and bring in their peers and make work that is collaborative,” adds Kim, citing partnerships between Rafa Esparza and Beatriz Cortez, or Candice Lin and Patrick Staff, all four of whom have now shown in the Hammer Museum’s prestigious biennial survey of the city’s mid-career and emerging artists, ‘Made in L.A.’. The institutional recognition affirms Chung’s diligence, Kim says. “I have to believe something like CwC can thrive in the art world, even in this hyper-accelerated, market-dominant environment.”

Nothing is Too Weird

“Los Angeles, as a subject of art history, has a few chapters to celebrate,” says Hamza Walker, director of non-profit art space LAXART, citing the Ferus Gallery days of the 1960s (the gallery closed in 1966) and ‘The Pictures Generation’ of the 1980s (a seminal exhibition curated by writer and historian Douglas Crimp at New York-based Artists Space, which explored artistic communities in New York, Buffalo and LA). Those days have passed, however, and LAXART’s focus is very much on the art of the present. Founded in 2005 as a platform for emerging artists with nowhere to show, LAXART, in light of all the young galleries that have emerged to pick up on those duties, pivoted its mission this year to respond to urgent cultural and political matters. Over the summer, Walker presented ‘Remote Castration’, a group exhibition responding to the #MeToo movement. Over the course of the show, the façade of the Santa Monica Boulevard building featured a portrait of Hollywood by Barbara Kruger – not the Hollywood of movie stars, but a sector of the city where pawn shops, dollar stores and sex work reign. Words such as “BREAK IT→OWN IT→STEAL IT→LOAN IT” were painted across the top, with the palette of black, white and green hitting the standard aesthetics of the surrounding marijuana dispensaries. As an OG enfant terrible, Kruger’s work has questioned the authorship of the status quo since the 1970s. The artists of this year’s ‘Made in L.A.’ at the Hammer seem to have picked up the torch, serving narratives excluded from the textbook art historical canon. Megan Whitmarsh and Jade Gordon built a collaborative parody of a typical LA New Age wellness institute with the very real intention of reframing the female life cycle as cause for empowerment. Lauren Halsey erected a monument to her native South Central LA and its residents in the shape of an Egyptian tomb, and it was Eamon Ore-Giron’s monumental Angelitos Negros (2018), a mural stretching the height of the museum’s grand staircase, that greeted visitors and set the tone of the show. Ore- Giron has arranged the circular motifs inherent to his work in a composition resembling the movements of the sun and moon. While his strong geometries typically evoke comparisons to the work of European modernists, he explains, they’re based on Peruvian abstraction of the 1200 and 1300s.

Ore-Giron’s mural is emblematic of the forward-facing art that defines LA now. It asks audiences to re-evaluate their understanding of the past, particularly concepts of Western art history. The appeal of LA lies in its cultural diversity, an atmosphere that, like his mural, “both elevates and alters the way we read the past,” says Ore-Giron. And from the past, into a bright, shining future.

This article first appeared in the Autumn 2018 Issue in partnership with Deutsche Bank. Browse more content here: The Beauty Issue Coming Together To Save Our Coral

« Previous article
Model of the Month: Rebeca Marcos
Next Article »
5 exhibitions to see in London this month + 1 to miss