Behind the wheel of the world’s most powerful supercars: part one In the first of our supercar reviews, we take one of the world’s fastest convertibles for a spin: the Aston Martin DBS Superleggera Volante

What is the purpose of buying an expensive fast car? The manufacturers themselves have had plenty of focus-group conversation over glasses of Krug at owner events; and so have we at our own gatherings of friends and readers.

Two-seater fast cars generally fall into one of two categories: super sports cars, created to be able to go around a racetrack as fast as possible while remaining legal and reasonably comfortable to drive on the road; and what the industry calls grand touring cars, which can be just as powerful but are biased more towards comfort, theoretically for crossing continents.

The two categories are bound together by looks – all of these cars are designed to garner attention – and indulgent, hedonistic design. In reality, not many people use cars from either category for the purposes they were designed for. You are as unlikely to take a multi-million euro Ferrari LaFerrari on a race track as you are to test your gold Rolex Submariner at the oceanic depths for which it is designed. And if you want to cross the continent in comfort, you will jump in a jet, and ensure your car is waiting for you at the other end, rather than endure traffic jams and police speed traps.

Which brings us to the Aston Martin DBS Superleggera Volante. This is a car that looks as exotic as it sounds: long, wide, sculpted and slightly brutal. It is not a show-off car like, for example, a Lamborghini, which is guaranteed to get the whole street looking at you; nevertheless with the primordial roar of its engine and its sheer presence on the road, it is a car that tells everybody around that you are here, and that you have made it. It is also the most powerful regular production Aston Martin, a significant statistic in itself. Get in and steer it down the road, and it doesn’t feel quite as wild as the horsepower figure, which at 715 is around five times that of the average car, might suggest. The steering is superb, with feel and sharpness. Some cars in this category have so much engineering to manage their enormous performance, that the sensations of driving are dulled. Not in the Aston, the noise and handling of which immediately let you know that you are driving something very special. It feels sharper, more alive, and more connected than the previous generations of powerful Aston two-seaters, while remaining comfortable and civilised enough not to shake you around, and that alone should guarantee it some loyal customers trading up.

But it is also very much a grand touring car. You don’t feel that every prod on the accelerator will send you hurtling over the horizon and off the edge of the world, as is the case with some supercars these days. The DBS works through its rev range a bit more like a V12 engine of old, gaining speed with momentum, despite having distinctly new tech using turbochargers to aid its power delivery. To appreciate what you can do properly, you need a long stretch of road, ideally with a Mediterranean beach café at the end. Put your foot down, feel the car gathering pace relentlessly as the engine sears towards its redline. It’s a supremely satisfying feeling, and slightly old school with its delayed gratification. It is not a car that tries to handle like a go-kart with a rocket on it. Its pleasures need discovering slowly. But it certainly has a hard, supercar edge to it.

Nobody buys one of these for comfort and practicality, but it does reasonably well on both. There is plenty of space for two in the front, and some shopping bags on the back seats; only a masochist would want to actually sit in the back, although we did fit one teenager in with their legs across both back seats and the roof down. They had a whale of a time.

In an era where cars, even at the very high end, have never been better, but also have never been more similar in terms of engines and general engineering, the Superleggera Volante (Volante just means convertible in Aston speak) has two things that make it distinctive: character and class. You can buy faster cars for the money, and flashier cars, but James Bond circa 1966, teleported to today, would recognise immediately that he was driving an Aston as soon as he shut the door and hit the start button. Priceless. Designer Ali Behnam-Bakhtiar on the future of luxury events 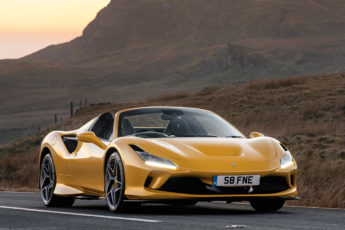