Most luxury travellers know that the most beautiful corners of Ibiza are in the North, far away from the strip of infamous clubs, but the opening of new boutique hotel Mikasa in the centre of Ibiza Town is a game changer, says Digital Editor Millie Walton – and it’s open all year round

It’s early evening in Ibiza and we’re sitting on the rooftop terrace of the newly opened Mikasa hotel at the Lebanese restaurant. The surface of the sea is shimmering gold with the light of the setting sun and the super yachts loom almost spectral in the rosy hue. As it’s not yet 8pm, we’re the only ones on the terrace (in the Med, the evening begins proper at 11pm) and it’s almost completely silent apart from the occasional drift of voices from the street below and the call of seagulls. It’s hard to imagine that this is the heart of Ibiza Town, a stone’s throw from the infamous nightclub Pacha, in full swing of high season. Of course, it’s not all like this, Ibiza hasn’t miraculously transformed into a quiet paradise island, but Mikasa, somehow, has found a calm corner in the midst of the carnival. Mikasa’s rooftop Lebanese restaurant with views of the Marina and Ibiza Old Town.

The hotel opened earlier this year, by the same people behind Beachouse and Finca La Plaza, two of the island’s most exclusive venues, and it offers the same level of sophistication with 16 beautiful rooms, furnished simply with natural woods and linens. None of the rooms are enormous, but the best have their own balconies which catch the sun at various times of the day depending on which way you’re facing. Ours overlooks a small courtyard, whilst the other side benefits from glimpses of the sea.

Downstairs, there’s a restaurant where breakfast is typically served and trendy looking freelancers perch throughout the day on their Macs, sipping freshly pressed juice. A famous blogging duo arrived earlier this morning to pose against the turquoise tiling at the entrance — you can tell that the design of the hotel has taken the Instagram culture into account without being gimmicky, but in the sense that there’s bright, photogenic colours and well curated ornaments. Even the food is presented to seduce the camera lens. 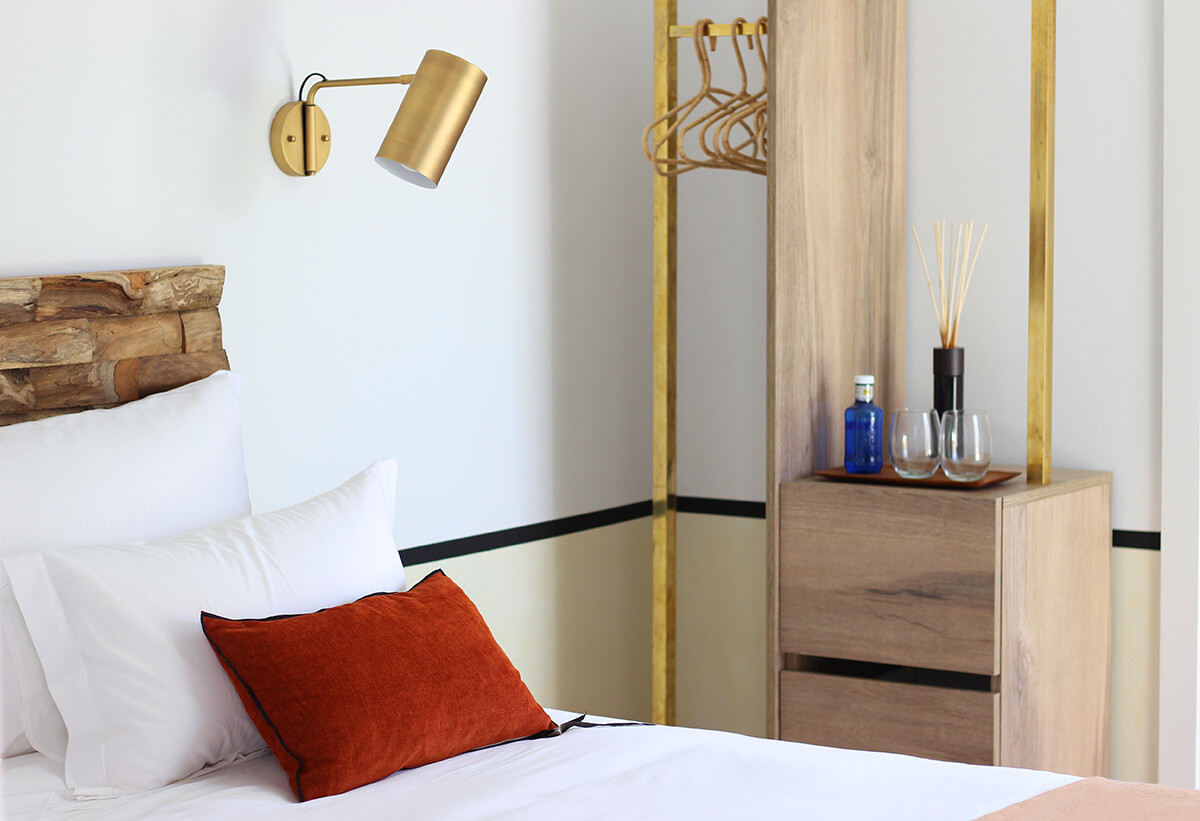 Mikasa’s 16 rooms are named after the monthly moons.

Our tasting Lebanese mezze arrives just as the tables around us begin to fill and within half an hour, the place is full. Mikasa is the group’s first hotel, and up till now they’ve been mainly known for exceptional dining with Finca La Plaza regularly being listed amongst the island’s top restaurants. Located in the gorgeously picturesque town of Santa Gertrudis (a fifteen minute cab ride from Mikasa), Finca La Plaza serves seasonal Mediterranean food in a secluded courtyard laced with fairy-lights. On a previous evening, we dined on fresh, oozing burrata with anchovies and baba ganoush, tender octopus with sweet kumquat confit and wild seabass with sautéed broccoli and sweet garlic.

So we have high expectations for tonight at Mikasa. Whilst there’s initially some confusion with our waiter on what we, as pescetarians, can and cannot eat, the meal is fabulous; rich creamy humous paired with a crunchy fattoush salad, falafel and tangy marinated prawns which are cooked to mouthwatering perfection. Beachouse is the group’s daytime venue (also a fifteen minute cab drive away), located on the far end of Playa d’en Bossa, far away from the crowded package hotels and the spill of tipsy tourists. We arrive early one morning for a dynamic beach yoga class, followed by a wholesome breakfast. The classes are held every weekday morning at 09.30am and are donation only – the proceeds go towards the keeping the sand and sea clean.

Read more: Wendy Yu on building bridges between the East and the West Morning yoga on the sand in front of Beachouse.

The Beachouse is by far the most beautiful venue on this strip of sand with plush double or single sun-beds, waiter service and a cool, open sided restaurant. During our trip, there’s a party with a live DJ playing a set from 6pm whilst people sway on the beach and barefoot children race between legs. Unlike a lot of Ibiza’s party venues, which are essentially overpriced sticky clubs, Beachouse has a relaxed, hippie kind of vibe and attracts a high-class cliental. Luxury double daybeds can be reserved at Beachouse with a minimum spend of 100 euros.

Our only gripe is that calling a taxi is tricky at nighttime in Ibiza Town. Even with the help of Mikasa’s reception, we have several cancel on us last minute. It would make more sense for the hotel to offer their own private transportation to and from their various venues, that way guests could drift with ease in a perfectly sealed bubble of luxury.

Mikasa is open all year round, to book a room visit mikasaibiza.com; for a reservation at Finca La Plaza – fincalaplaza.com; and for more information on Beachouse – beachouseibiza.com

All photography by James Houston

« Previous article
Bruno Schöpfer, Managing Director of the Bürgenstock Selection, on the future of luxury hospitality
Next Article »
Sassan Behnam-Bakhtiar in conversation with Jean Cocteau