The success of Hublot’s artist collaborations

Luxury Swiss watchmaker Hublot is letting artists design their timepieces, and their customers and collectors love them. Rachael Taylor examines a new trend in horological branding

Hublot chief executive Ricardo Guadalupe was  on a skiing holiday in the exclusive Courchevel resort in the French Alps when he spotted unusual sculptures rearing out of the powdery white slopes. The giant faceted animals, including a howling wolf, a chest-beating gorilla and a bright red Tyrannosaurus rex, were the work of contemporary French artist Richard Orlinski, and this chance encounter with a mountain-top menagerie would go on to inspire a surprise hit for Hublot.

“Maybe Hublot was surprised, but I wasn’t,” laughs Orlinski, commenting on the success of the first watch he designed for the brand. “I don’t know if I have talent, but with my eyes I can see what people see. I’m a mainstream guy. When I like something, a lot of people like it.”

Indeed, Guadalupe has described the demand for Orlinski’s Hublot watches as “unbelievable”, and impossible to fulfil. The collaboration first started in 2017 with the Classic Fusion Aerofusion Chronograph Orlinski, a polished titanium skeletonised model with a sharply faceted case and bezel that mirrors Orlinski’s iconic sculptures. The Swiss watchmaker, passing creative control to an artist for the first time, created a modest run of 200 watches, unsure of how they would be received. The collection quickly sold out, attracting existing Hublot collectors, as well as aesthetes, art buffs and quite a few of Orlinski’s famous friends who were new to the brand. Since then, Orlinski and Hublot have partnered to create a further 10 editions of the watch. These include a vivid-red ceramic version that launched last year; the colour, which is technically very difficult to achieve and is exclusive to Hublot, matched a shade applied to many of Orlinski’s sculptures. For luxury collectors, there is the Aerofusion Chronograph Orlinski King Gold Jewellery, a 18ct solid-gold version set with more than 300 diamonds. And at the top of the range is the Tourbillon Power Reserve 5 Days Orlinski Sapphire, limited to just 30 watches, with a case made entirely from  polished sapphire crystal.

The faceted cases and bezels of Orlinski’s watches dazzle with light and shadow, adding a sculptural edge to the design. Keeping the watch functional, legible and wearable was important to Orlinski, who is himself a watch collector. “I know a lot about watches,” he says, but admits that until this collaboration his hoard did not include a Hublot as it was focused on vintage timepieces. “I wanted to make a mix between a watch and a sculpture – something you can wear every day, not something very strange.”

Hublot was not the first watch brand to come knocking at Orlinski’s door. Others had tried, but they offered the chance to customise rather than create. For Orlinski, this was not enough. “I always declined because they wouldn’t let me do anything,” he says. “Hublot treat me as a watch designer.” 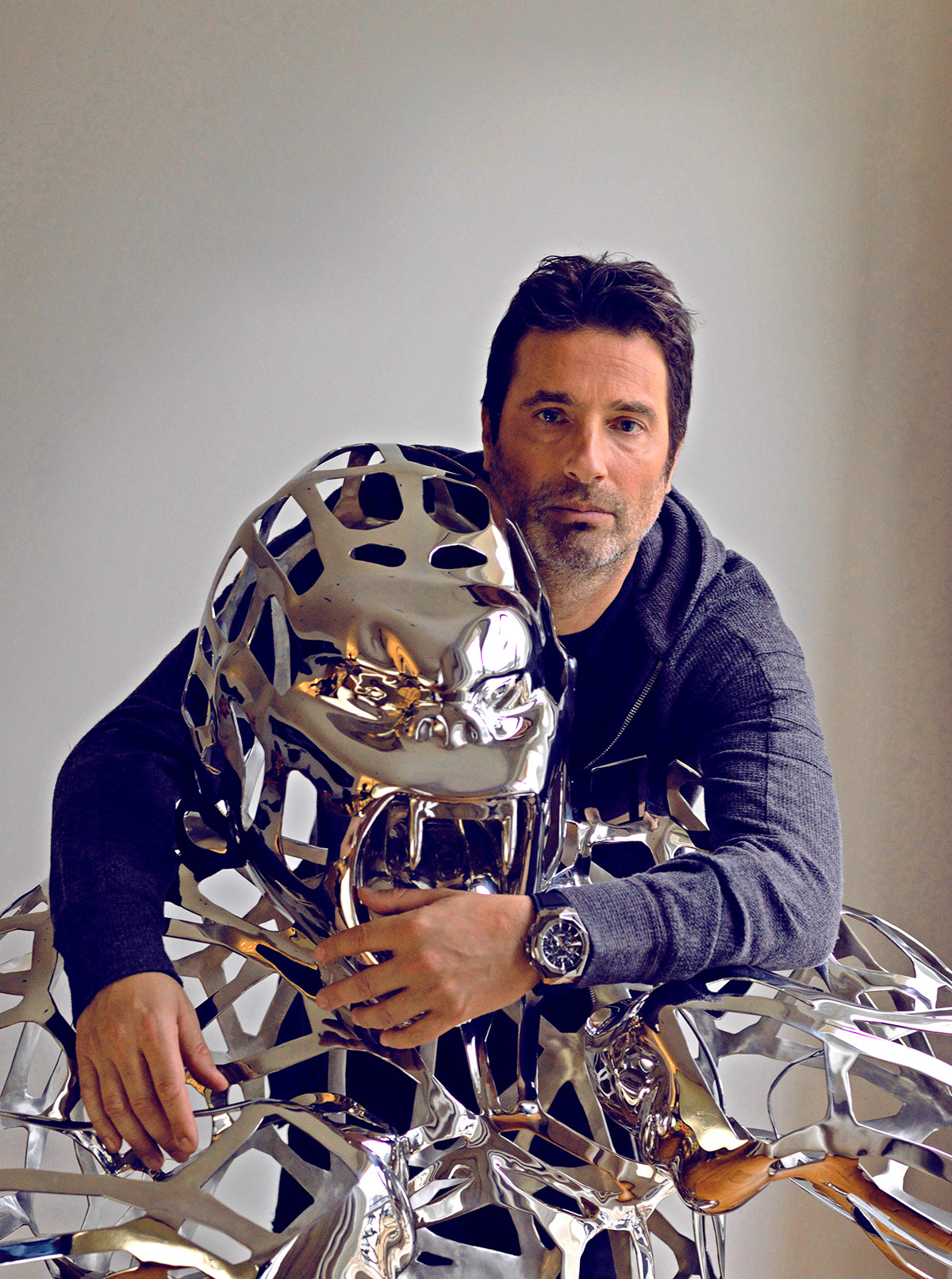 By giving Orlinski autonomy over the watches that bear his name, the mainstream magic that the bestselling French artist claims to wield has rubbed off on Hublot, making it a commercial success, while also giving it a dose of art kudos. The collaboration has also had benefits for Orlinski’s art, as the global exposure he has enjoyed while touring the world for Hublot events has widened his fan base.

Such synergy between the contemporary art and luxury worlds has led to many such hook ups, as brands use artists to inject fresh vigour into heritage labels. Last year, Chaumet celebrated modern African art by enlisting Kenyan graphic designer Evans Mbugua to create a collection of high-jewellery brooches, while Dior invited 11 artists, including Isabelle Cornaro, Li Shurui and Poppy Apfelbaum, to reimagine its Dior Lady Art handbag. “Nowadays, art gives a credibility to brands,” says Orlinski. “A lot of them understand that they have to tell stories; selling things is not enough now. We live in the World 2.0, and things are changing so fast. If you want to stay in the game, you have to be open minded. People want something different.” It’s also, he says, about using popular art to engage with a wider audience: “Even if you are a luxury brand, you have to talk to everyone. If you only talk to the rich people, you’re dead. The brands that don’t change are going to die.”

As art and watch collectors line up to own a wearable piece of Orlinski, Hublot plans to keep this particular point of difference very much alive and ticking. While the core design of the watch will stay true to its faceted form, Orlinski believes there are myriad possibilities for the future, such as fresh colourways, new materials and increasingly complex horological complications. And at Baselworld watch show in March 2019, the first line of Orlinski Hublot watches for women will be unveiled, opening up a whole new market. “This model will evolve a lot,” says Orlinski. “I have so many ideas, we can go on collaborating for 20 years. It’s just a matter of talent, energy and brainstorming.” The case for collaboration

Hublot, like most watch brands, is best known for its sporting collaborations – its long-running partnership with Ferrari continues to be the vanguard of such alliances. Deals like this, and its sponsorship of the Fifa World Cup in Russia last year, are, according to chief executive Ricardo Guadalupe, the “premier league” of collaborations, to use a suitably sporting analogy. Uniting the worlds of timing and art is a less obvious strategy, but brings other benefits that Guadalupe is keen to cultivate.

“We’re always looking for new inspirations, and we have found that we should not stay in our industry, but go outside,” he says. “When you come with something unique and different, I think consumers are really waiting for that.”

As well as working with Richard Orlinski on his hugely popular line of faceted watches (“The demand is still unbelievable. We can’t keep up with it”). Hublot has also engaged Los Angeles-based street artist Tristan Eaton and London tattoo studio Sang Bleu to reinterpret its Aerofusion and Big Bang models.

“[Working with artists] positions us as a trendsetter in creating new designs for watches and this is really important,” says Guadalupe. “We are at the beginning of the process with Richard Orlinski, with the tattoos, so this is something really new that is appearing in our world. Probably it will bring new consumers into our brand, but it also allows our actual consumers that love Hublot to buy a new watch. You must bring always something different and innovative. [Through art] we are creating a new way of making watches.”

« Previous article
Island life at the luxury resort of Baha Mar
Next Article »
Beneath the blue clay: Masseto’s new winery