Darius Sanai examines the creation of Bond, one of the world’s most desirable wines and brainchild of Napa Valley wine royal Bill Harlan, over a tasting with its winemaker

Legacy is an important concept in the luxury industry. In a world where perception and status form a fundamental part of a brand, legacy means stability, and retained value. A Ferrari derives its value partly from the racing Ferraris of the 1950s, now worth multimillions. A Picasso or a Matisse is valuable because the artists retained and enhanced their status long after they stopped producing works, though the legacy of their collectors and dealers.

The world’s great wine brands have long traded on legacy: indeed, they are among the longest-lived legacy brands in the world, Chateau Haut-Brion, owned by Prince Robert de Luxembourg, was name-checked by Thomas Jefferson, American revolutionary and one of the country’s Founding Fathers. Brands like Chateau Lafite, Chateau Petrus and Domaine de la Romanée Conti may be hot among a new generation of collectors, but they have been desired and collected by royals and the wealthy for centuries.

No watch, jewellery or leather goods brands can claim a legacy as long as the world’s luxury wine brands: Chateau Latour came to prominence as long ago as 1680, centuries before Hermès, Louis Vuitton, Patek Philippe or Rolls Royce existed. Bill Harlan is the founder and owner of Harlan Estate, one of the wine world’s modern luxury brands, based in Napa Valley, California. Unlike certain luxury goods, whose brand equity can be created by the illusion of marketing, the status of a wine, as a consumable product, rests largely on its inherent quality. No amount of brilliant marketing will make collectors crave a mediocre wine.

Harlan’s wines rose to the top of the tree through their quality, and also scarcity: to this day, to secure a case or two of top vintages, money isn’t enough (although they are as expensive as any of the world’s top wines), you need contacts.

Harlan stepped back and handed the reins to his son, Will, a couple of years back, although Harlan Sr is still involved in the background. And one of the founder’s most interesting moves was the establishment, in the late 1990s, of a sister estate to Harlan in Napa Valley: Bond.

Bond would make wines from specific vineyards, all planted with 100% Cabernet Sauvignon, deemed by Harlan and his team to be the best of the best in the region. The stated aim was to create “Grand Cru” quality wines, from specific sites whose terroir – combination of climate, soil and positioning – had been analysed closely. Grand Cru is, itself, a challenging term in the wine world: in some places, like Burgundy, it generally denotes the very best, and most expensive, wines in the region and the world. In others, like Champagne, it is less meaningful, in Bordeaux the term “Grand Cru Classe” covers hundreds of estates at different levels, and in Napa it has no formal meaning at all.

But a self-certification from the Harlan family has a meaning of its own, given their position at the top of the Napa Valley wine tree. And Bond is all about legacy: just as Domaine de la Romanee Conti has been known as among the very best physical vineyard sites in Burgundy for centuries, so Bill Harlan’s stated intention is for Bond’s vineyard site to be known as the very best places to create Cabernet Sauvignon in Napa Valley for hundreds of years to come.

And it takes many years to make, and judge a great wine: for a great wine is not one that tastes excellent when it is five years old, but one that develops and is magnificent when it is 50. So, the jury is by necessity still out, but that doesn’t stop us from dipping our toes in the judgement pool. With that ambition in mind, Darius Sanai settled down for a Zoom tasting with Max Kast, Bond’s Estate Director and Cory Empting, Bond’s managing director of winemaking, of wines from Bond’s five sites: Melbury, Quella, St Eden, Pluribus and Vecina. We have a little history here, because a few years back, Darius included a bottle of Bond Melbury in a tasting of the world’s greatest Cabernet Sauvignons, which he hosted for the Prime Minister of Kazakhstan at the Four Seasons George V in Paris, which he chronicled in GQ magazine.The Bond wine was the overall winner in a field that included the likes of Chateau Lafite, Chateau Margaux, and California’s Screaming Eagle. Empting is an engaging and self-effacing tasting host, without a hint of pomp or self-aggrandisement, despite the desirability of his products. He told LUX that he is constantly examining new sites, making wines out of them to assess their potential, to see if any other wines can be permitted into the Bond club. For the moment, there are five, all of them sharing power, finesse, and a sense of grandeur. Each subtly different in character, these are attention-seeking wines in that they demand your full intellectual engagement: they would be the centrepiece of any dinner, like an extra guest. Although we will all have our favourites, it is not possible to choose an objective winner here: Bond wines are about the character of these ultimate vineyard sites in one of the very greatest wine growing areas in the world.

The Bond wines (tasting notes by Darius Sanai); in order of tasting, not of preference. All wines from the 2013 vintage.

Bond Vecina
A kind of wildness here, amid the grandeur and size. Very savoury, umami and smoked bacon with mulberries. Also a refreshing twist. My personal favourite, and one to sip, on a hilltop, alone, contemplating sunset over the distant forested hills.

Bond Melbury
Big and rich, but also stylish and layered, not overwhelming. This would be the Bond wine to serve to a lover of Chateau Margaux, to show California’s equivalent, before racing away the next day in your Ferrari GTO. Bond St Eden
Fascinating wine: one we felt was being opened far too young. Very structured, concentrated, packed with nuance, shielded by a shell at the moment: stones, berries, plums, Mediterranean herbs, it’s all there. Decant it ahead of time and serve to a collector of Rembrandts, next to one of their Rembrandts. It’s that grand.

Bond Pluribus
Pluribus is so concentrated, so dense, that it would be the dominant factor in a meal of Simmental beef with foie gras and a béarnaise sauce. There’s a black fruit nature to this wine, with a kind of intense, graphite power, you feel you should write a letter with it.

Bond Quella
This fascinating wine was quite closed, almost light, on opening, but transformed in the hours after our tasting to have a Burgundy-style elegance and lift, along with a freshness of mountain river beds and plenty of dense fruit. We’d find the oldest vintage available to drink now, or buy a case now to drink in 2040. 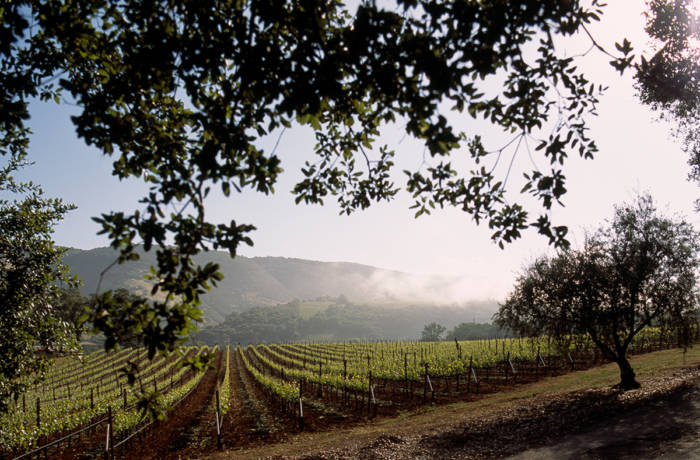 Celebrations in the vines at Clos de Tart