Summertime in the alpine village of Andermatt 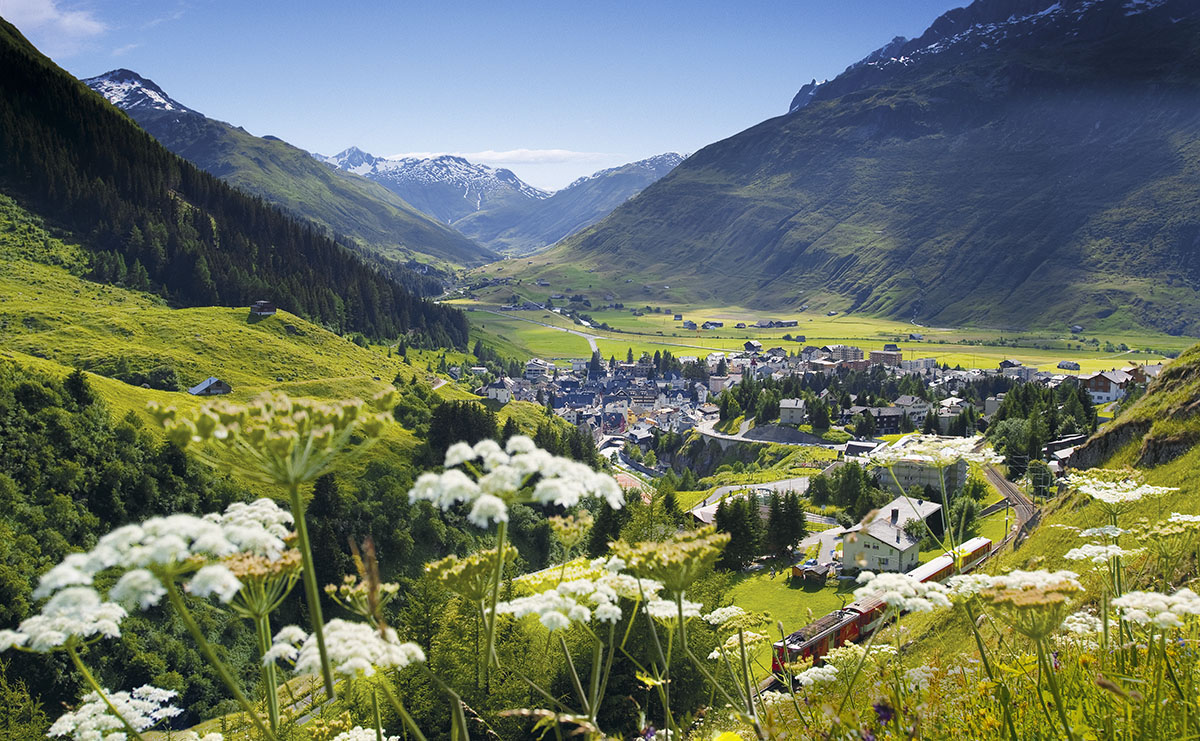 Summer in Andermatt with bike trails, the historic village streets, the Radisson Blu hotel and the new golf course

Andermatt is rapidly becoming one of Switzerland’s best year-round Alpine destinations. Already famed for its winter sports, the resort is now offering activities, accommodation and dining for summer, too, thanks to a major new development. Rob Freeman discovers the joys of the village’s new season

As the winter snows melt on the slopes above Andermatt, the year-round allure of this Swiss village becomes apparent. Thanks to the charm and the beauty of its summer meadows carpeted with white, blue, yellow and pink Alpine flowers, the resort has become a multi- faceted, all-season destination.

As glorious as it is in winter – Andermatt is now a world-class winter-sports centre and part of central Switzerland’s largest linked ski area – the resort, thanks to some remarkable developments that are taking place there, is equally stunning in the summer. In many ways, the contrast between the verdant valleys and the glistening white peaks above in summer makes this landscape even more striking.

Andermatt’s parish records go back 800 years, with many of its houses being centuries old, so it’s small wonder that there is a palpable sense of history and tradition in its streets. With such a background, it’s intriguing to see the village enter a new phase, underlined by the recent opening of the elegant shopping and dining square, the Piazza Gottardo, which is part of a visionary development by Egyptian investor Samih Sawiris that will see the village double in size. There’s a distinct yet subtle style to this new car-free area, known as Andermatt Reuss, of which the Piazza is the centrepiece. The trick is having every building individually designed by one of more than 30 Swiss and international architects to create an eclectic rather than uniform appearance. Each new building, as architect Christoph Langenberg, the project manager of the developer Andermatt Swiss Alps, explains, pays homage in one respect or another to the traditional styles of the local architecture. The Edelweiss apartment building, for example, has distinctive shutters with chevron patterns in contrast to the broad arches that protect balconies against the sometimes severe weather. But its most extraordinary feature is its exterior colour, which starts from a dark base and gradually lightens as it rises until seeming to fade into the sky. Diamond shapes are scored into the façade, with wavy lines accentuating the lightness. In another building, House Wolf, the design incorporates the careful gauging of the sculptural effect of the roof overhang.

“The buildings are clustered together more closely than is usual in new projects like this,” Langenberg adds. This is deliberate, to reflect the traditional way in which these villages evolved. The buildings have always been close together for warmth and security. We wanted the new developments to be an extension to the old village, rather than something separate.” One to five-bedroom apartments are available, and the whole project, which will include 30 individual chalets, has no purchase restrictions for foreigners. 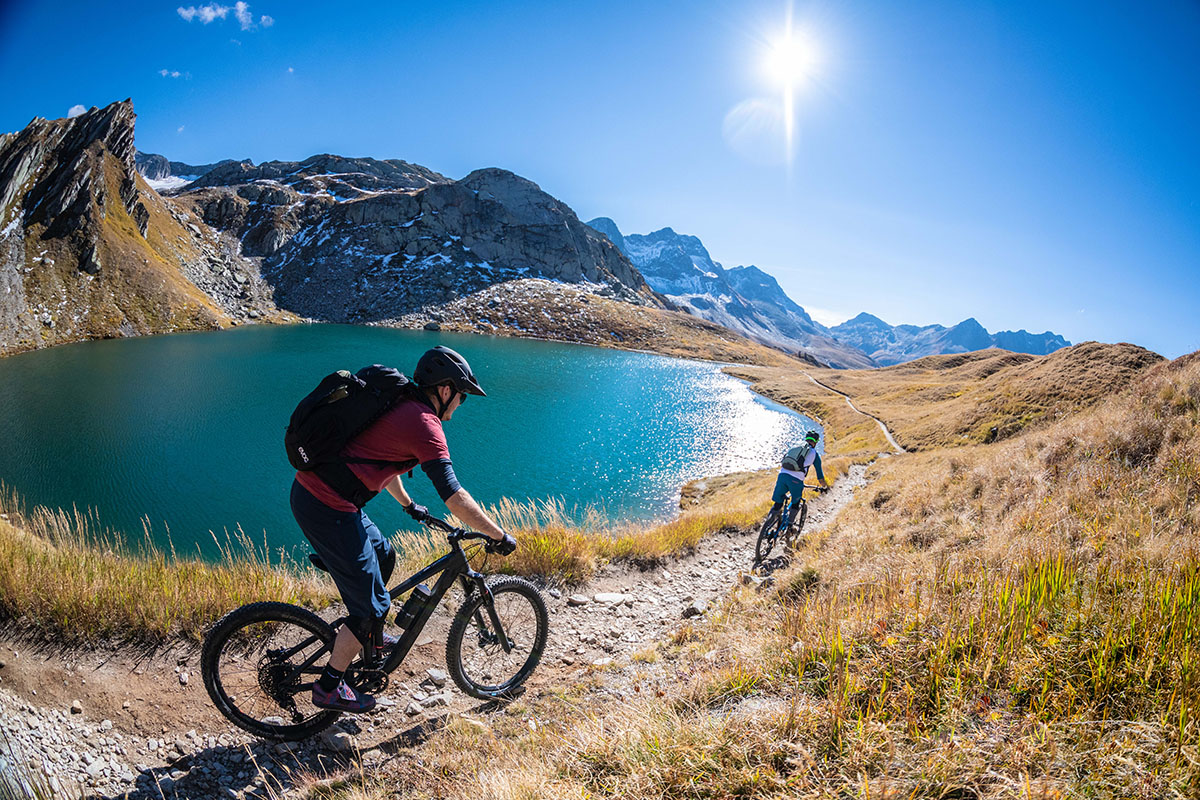 The square, complete with fountain, is fringed by shops, restaurants and bars. Restaurant Biselli already epitomises Piazza Gottardo’s village spirit and, from 8am to 11pm, is a focal point for holidaymakers and residents. Occupying the ground floor of the six-storey House Alpenrose apartment building, the restaurant is also a bakery, providing rolls and croissants every morning, and a chocolate shop where the chocolatier can often be seen creating little masterpieces. It also has a small section selling holiday necessities such as milk, butter and jam, even toothpaste. The softly lit restaurant, which is romantic and stylish, has a menu embracing dishes such as goose liver mousse with cognac and truffles, and  sea bass baked in puff pastry, as well as local specialities such as tarte flambée of onions, bacon, sour cream and mountain cheese, and dumplings with roasted pork belly.

The Mammut sports shop opposite is a high-end ski-rental shop in winter and a bike, hiking and climbing emporium in summer. A Victorinox store has a large selection of Swiss Army and kitchen knives, designer luggage and watches. A pharmacy and small supermarket will soon join the line-up. The impressive Radisson Blu Hotel Reussen opened recently, and its Spun restaurant, highlighting Swiss and Italian cuisine, also fronts onto the Piazza. The hotel also has a fitness zone including two saunas, steam bath and 13 treatment rooms and extensive gym, as well as a 25-metre public indoor pool with floor-to-ceiling windows facing the mountains of the Urseren Valley. A new concert hall with state-of-the-art acoustics and seating 700, designed by British studio Seilern Architects, is attached to the hotel. Further accommodation for the village will include a hotel aimed at families, featuring a water-slide through reception!

Summer offerings include walks from gentle strolls to challenging hikes, and climbing for novices as well as experts. Also popular are e-bikes with auxiliary motors to tackle distances and gradients that would otherwise be out of the question. The Four Headwaters Trail links the nearby sources of four rivers, the Rhine, Reuss, Ticino and Rhone. The 85-km family-friendly route can be split into day trips or a five-day tour staying at huts. And days out on the Matterhorn Gotthard Glacier Express are spectacular. There’s no more marvellous way to enjoy these glorious mountains. Designed to complement its spectacular natural setting, Andermatt’s 18-hole golf course is immediately adjacent to the village. Although it only opened as recently as 2016, it has already achieved the highest possible accolades, including being named Switzerland’s Best Golf Course in the World Golf Awards every year since. Designed by renowned German golf-course architect Kurt Rossknecht, it has the feel of a Scottish links course and meets international tournament standards. Importantly for holidaymakers, it is open to the public on a pay-and-play basis.

This article originally appeared in the Summer 19 Issue.