Picasso Towers is Málaga’s latest luxury residential development, featuring 213 apartments on the seafront. Conceived by Sierra Blanca Estates in collaboration with Metrovacesa – and with endorsement from Antonio Banderas – the project aims to transform the Spanish city into more than just a holiday destination. Here, LUX Editor-in-Chief Darius Sanai speaks to Pedro Rodriguez, the founder of Sierra Blanca Estates, about the challenges of the project, creating demand and Málaga’s future LUX: Can you tell us your story and how you came to work in development?
Pedro Rodriguez: I studied tourism and I was the top producer of tourism to Spain from the United States for more than 10 years. I actually worked for Thomas Cook more than 40 years ago. And even though I was very successful as a tour operator there was something that made me consider making a change. It was actually two or three things I think. Number one and most important, was when Spain joined the European Union back in ’85. At that point, I was reading a book that was about Megatrends, which was written by a sociologist, and he came to predict what was happening already in the USA. People and companies establishing the North Industrial coal estates were moving to the Sunbelt, especially to California and Florida, looking more than anything for quality of life – obviously in Florida, as you know, they have a tax advantage also. This transformed Florida into one of the most successful states in the USA. Well, I didn’t have to be a genius to think that if I was going to make an investment back in ’85 it should be in Spanish real estate, because the same thing [that happened in Florida] was probably going to happen in Spain. So that was how I started. I invested in real estate, but from day one, I invested in only what I considered was going to be the best project for the future.

LUX: When did you decide that Málaga would be a focus with Picasso Towers?
Pedro Rodriguez: We started to buy the project five or six years ago. At that time, people were very sceptical that we could even build this type of project. Almost everyone was sceptical, but when we explained the idea to Antonio Banderas, who is our ambassador, he agreed because he is somebody that will do anything to promote the city where he was born. So we explained the philosophy behind the project and how we wanted to contribute to Málaga as a residential destination.

Successful people want to enjoy the fruit of their success and as these people are looking to invest in real estate, they are thinking about where they want to live, but also where they want to establish their own startups, their own companies. That is what is going to help to transform Málaga not just as a vacation or residential destination, but as a community of all nationalities. A render of an apartment’s interiors inside Picasso Towers

LUX: Is it a challenge that people do not tend to think of Málaga as a location where you’d buy a very high-end holiday home?
Pedro Rodriguez: Málaga has been projected as a cultural destination in the last 10 years, and it has been celebrated in many interesting films. Also, as you know, it’s an old city – it’s more than 2-3,000 years old. It has not only the old town, but also the Roman area. We invested and started to look at Málaga with great interest because of the way it was growing already, the attention that it was getting from entrepreneurs from Spain and all over Europe. We thought that the interest was going to bring a demand for a higher quality product, and the kinds of apartments that we are building did not exist before in Málaga. You are right that Málaga doesn’t at this point offer housing or apartments with the design or the quality that Marbella offers already, and that is what we realised.

We can already see that the demand is increasing from a variety of interesting people, who are part of the new society that it is coming to the city. It has always been my philosophy to create an end product that would be of a design and quality that will exceed whatever is on the market. There is always a demand for something very special, and the quality of the project is what generates the attention, and desire of people. I think that we are contributing a very singular, unique product with Picasso Towers, and it is helping the city to project itself as a residential destination with a quality product that didn’t exist before. 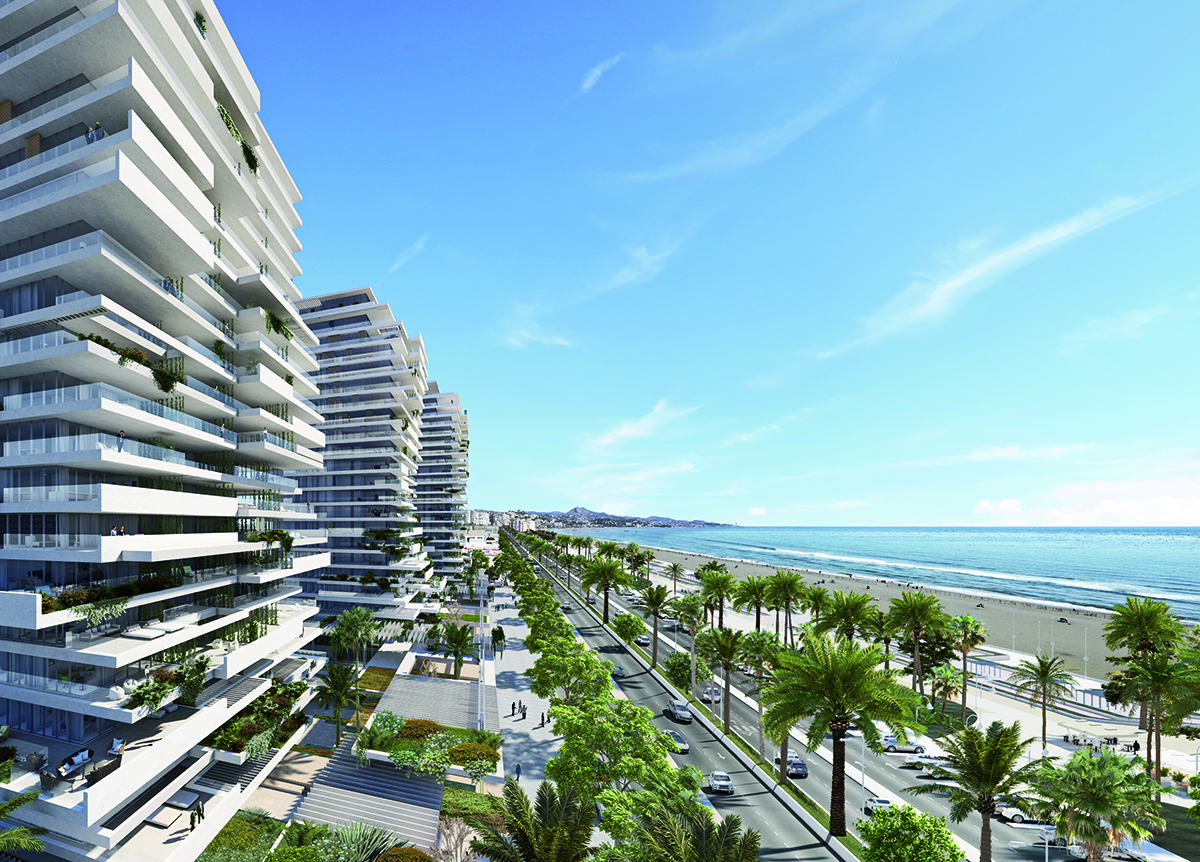 One of the towers is dedicated to luxury lifestyle amenities including three swimming pools, a premium spa, fitness centre, private cinema, playroom, co-working area and nursery, as well as incorporating the latest technology and security.

LUX: A few years ago, you published an article about how people were opposed to one of your projects in Marbella because they thought it was too big, too sophisticated for the location. Have you had similar challenges with this project in Málaga?
Pedro Rodriguez:
When you are creating something unique or special that the city’s society is not familiar with, you have to accept that you will have people who don’t really believe in it. But that is normal. If you create – in whatever area or industry – something that’s special, you cannot expect the majority of people to agree and understand what you are creating otherwise it would not be original, it would not be special. That was my idea in Marbella, yes, when we began to build the Sierra Blanca. It is a special destination in Marbella, and people were thinking that it was crazy because we were investing 20 or 30 million euros of today’s money [the project was 30 years ago]. In Málaga, when I was conceiving the idea for Picasso Towers, people were sceptical as to whether Málaga was ready for that kind of project. They were proven – and we are still proving – that they were wrong. Fortunately, there is a growing number of local and international successful entrepreneurs that are changing Málaga day by day.

Read more: Why you should go to St Moritz now for perfect snow

LUX: Is it true that Málaga is becoming a tech and business destination as well?
Pedro Rodriguez: Absolutely. New and important international companies are being established quite frequently in Málaga. It is happening almost everyday.

LUX: Are you expecting the buyers of Picasso Towers to be international?
Pedro Rodriguez: We haven’t really started the international promotion yet, but right now, we already have Swedish or Finnish investors, but mainly Spanish. We have Real Madrid soccer players that have invested in at least four or six apartments. Eventually, it will be home to a great variety of people from almost anywhere.

LUX: Finally, what other developments do you have planned for the future?
Pedro Rodriguez: We have an excellent project under construction right now in Marbella that it is without question, the best apartment project to be built in the city in the last 20 or 30 years at least. We are really proud to say that we have come to an agreement of doing branding with Fendi Casa, and the apartments are excellent alternatives to luxury villas. It is obviously a nice apartment, but at the same time, we want to create a country club lifestyle.

The first phase of Picasso Towers apartments will be ready by the end of 2021, and the whole resort is expected to be completed by 2023. For more information visit: sierrablancaqualityestates.com; metrovacesa.com