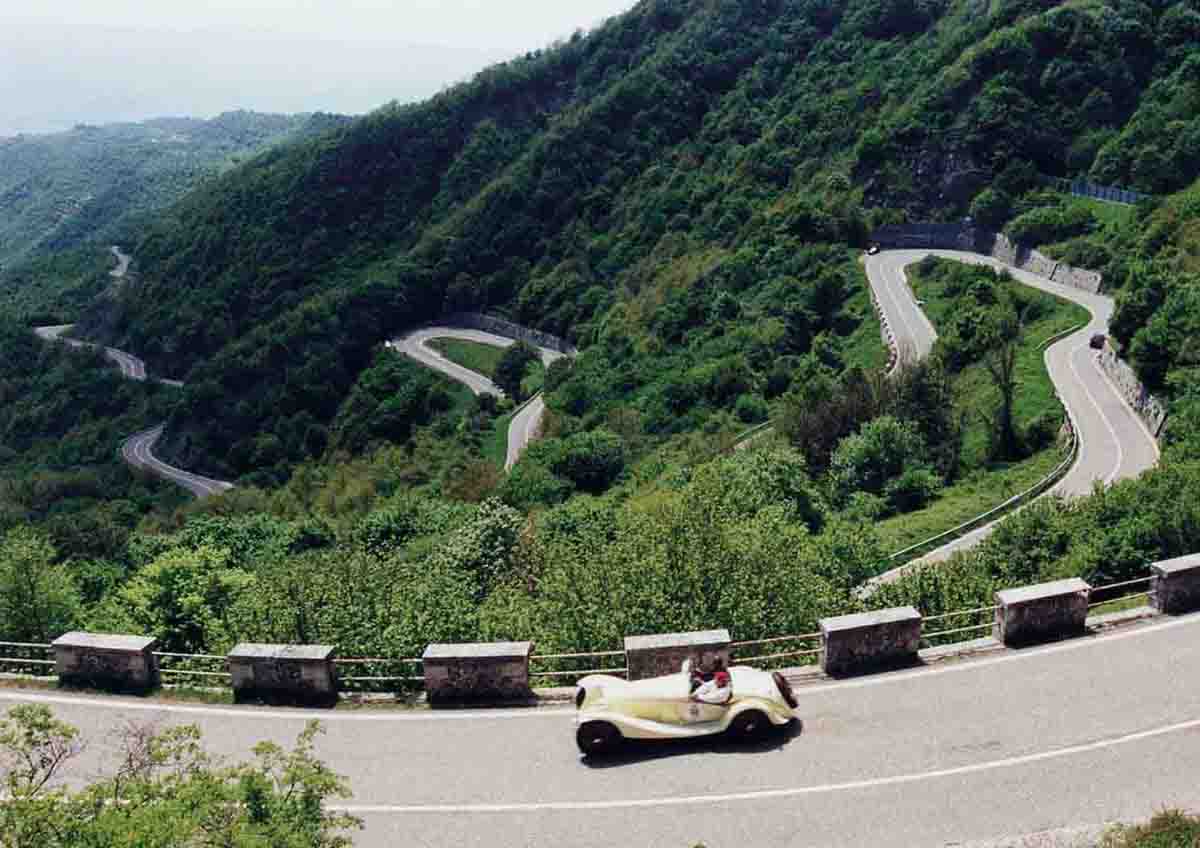 The Mille Miglia is one of the world’s most prestigious motor-racing events. Founded in 1927 as a speed race, today it sees classic-car lovers from all over the world congregate in the northern Italian town of Brescia for a regularity race to Rome and back, taking them through some of the most beautiful landscapes in the world. As it celebrates over a century of racing, the Mille Miglia is going from strength to strength – most recently by welcoming a new major sponsor in the form of Deutsche Bank Wealth Management. Ahead of this year’s edition, Anna Wallace-Thompson speaks to Chopard co-president and regular participant Karl-Friedrich Scheufele about Chopard’s three decade-long partnership with the event

It’s a balmy spring day in May, the kind where it’s warm in the sun and cool in the shade. We’re in the north of Italy, and hundreds of thousands of people are milling around in narrow, medieval streets, congregating around classic cars in bright racing colours of red, yellow, blue, silver and dark green. Cars are parked side by side in piazzas, or nose to tail in between buildings, wherever there is space. Suddenly, amongst the all-pervasive rattling and purring of some 400 engines, a sonic boom marks the whirring, whining rush of fighter jets soaring overhead, trailing streams of red, white and green smoke. It’s a heady mix.

This is the starting day of the Mille Miglia, the world’s most celebrated classic car regularity race. Every year, it starts in Brescia and attracts car lovers and celebrities alike. Participants have included Rowan Atkinson, Jay Leno, Jeremy Irons, the ‘Flying Finn’ and F1 legend Mika Häkkinen, and, back in its earlier days, legends such as Juan Manuel Fangio and Stirling Moss. Originally an open-road endurance race looping from Brescia to Rome and back again, it was established by two young counts (as all such events deserve to be), Aymo Maggi and Franco Mazzotti. Together with sports manager Renzo Castagneto and the motoring journalist Giovanni Canestrini, they envisaged the Mille Miglia as Brescia’s answer to the Italian Grand Prix (purloined after just one year from Brescia in 1922 and moved to Monza, which remains its home today). The original Mille Miglia (literally ‘a thousand miles’) was founded in 1927 and named after the Roman mile (not the American imperial system, as Mussolini suspected, or, at least, so the story goes) and ran in fits and starts until 1957. It was paused after a fatal crash in 1937, and again during the second world war, before a second fatal crash in 1957 saw it permanently closed. This was not, however, before Moss made racing history in 1955 when he not only left Fangio in second place to win the Mille Miglia, but beat the Italian by a staggering 30 minutes, becoming the first British driver in the event’s history to win. The secret to his still unbroken record of 10 hours, 7 minutes and 48 seconds (that translates to an average of 98.53 mph) lay in the detailed track notes he and co-driver Denis Jenkinson devised – common practice today, but not so much in the mid 50s.

Fast forward two decades, and the race was revived in its current form in 1977 as a regularity race around an annually changing route through some of Italy’s most beautiful landscapes. Racers no longer hurtle through the Italian countryside at breakneck speed. The challenge now is no longer on who can reach the finishing line first, but in the maintenance, precision and control of handling vintage cars that took part in the original races. 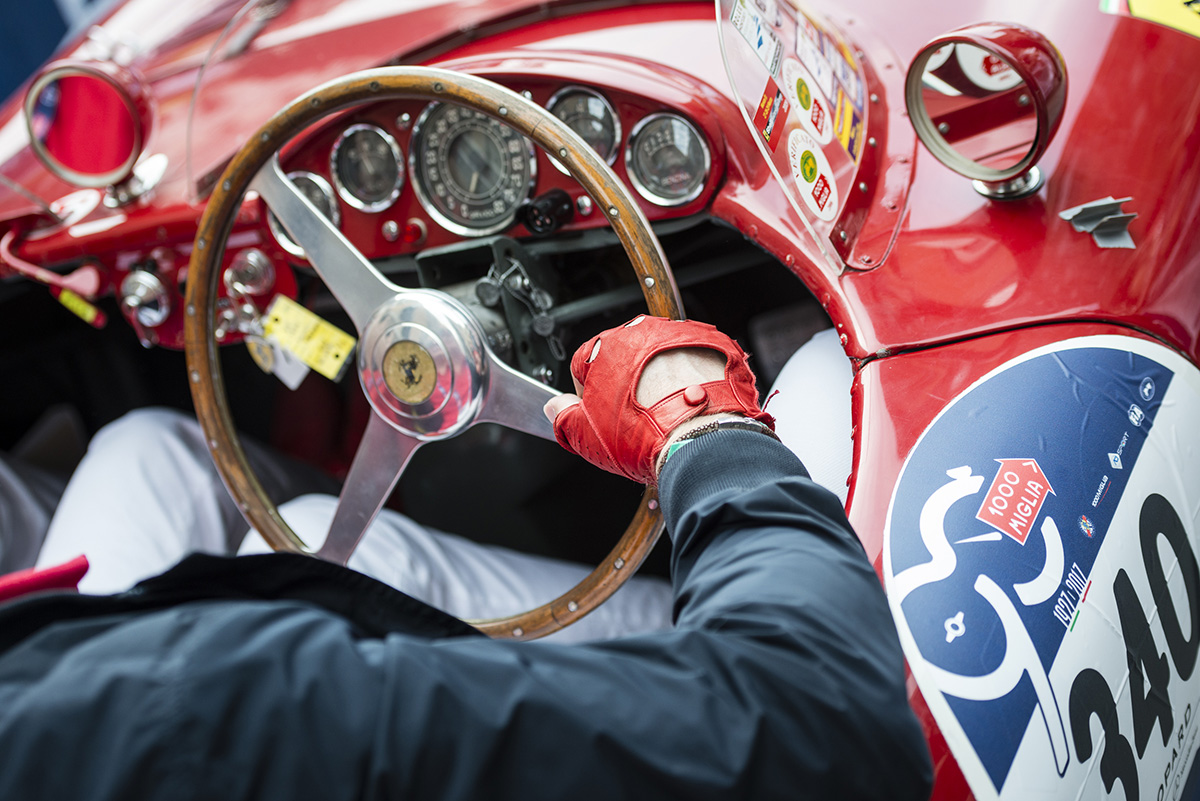 Another challenge is being allowed to take part. The Mille Miglia is one of the world’s most exclusive races and entry is either by invitation, or through a stringent application process where entry per car (yes, per car) is €7,000 (plus VAT) and dependent on a complex array of certification and documentation.

Participants should also have very good insurance. As any classic car collector will know, the combined total worth of the cars here soars into the hundreds of millions. While some are valued in the (relatively modest) hundreds of thousands, the upper end can be eye-watering. To give an idea, the 2016 Artcurial hammer price for the 1957 Ferrari 315 S that came second place in that year’s Mille Miglia was a cool US$35.7 million. Fangio’s 1956 Ferrari 290 MM, meanwhile, is valued at US$28 million. But this is the price one pays for being a part of history. “We are dealing with the culture of the automobile, of course, but also the culture of an incredible country,” notes Karl-Friedrich Scheufele, co-president of Chopard, which is celebrating 30 years of partnership with Mille Miglia (manifested through sponsorship as well as an annual special edition watch). “I think the most beautiful landscape is in Tuscany,” he continues. “There are hills you have to go up and down, which is a challenge, and the views are breathtaking. There are times I have to remind myself that I must concentrate on the driving. It is such a privilege to drive through places like Siena, to find yourself crossing the Piazza del Campo – well, it’s like entering a live museum. The Mille Miglia takes you to historic places one might never otherwise visit.”

This is no exaggeration, for the Mille Miglia is indeed like a living, breathing open-air museum. The oldest cars taking part are more than 90 years old – this year’s race included an OM 665 S Superba 2000, a Bugatti T 35 Grand Prix and a Bentley 3 Litre, all from 1925, as well as a quirky torpedo-shaped Amilcar CGSS Siluro Corsa from 1926 (complete with leather strap to hold the bonnet shut).

That leather strap is indicative of the attention to detail the Mille Miglia fosters. The joy participants take is evident not just in the pristine condition of the cars themselves (often referred to as “better than new”), but in the smallest of details – from old-fashioned racing goggles and leather caps down to vintage suitcases placed in luggage racks. However, to label the Mille Miglia quaint would be misleading – these are serious car and racing aficionados and the appreciation for what goes on under the hood is just as important as the beautiful paint jobs that keep the cars gleaming.

Scheufele himself has taken part in the race 28 times in the 30 years that Chopard has been official partner and timekeeper. “What really caught my attention was the immense enthusiasm that the spectators and general public had for this event, and for the participants,” he says. “Back then, of course, the whole event was much smaller – but you could already sense that it was on the way to becoming something much larger and more international.” With this in mind, Scheufele set about convincing his father, Chopard owner Karl Scheufele, of the merits of sponsoring the event. His efforts were successful, and in 1988, Chopard came on board as historical partner and official timekeeper. And the rest, as they say, is history. To watch the race get underway in Brescia’s Viale Venezia is to experience intense exhilaration. The anticipation in the air is palpable; it creates a rush of adrenalin that is contagious. One could argue any racing event would have a similar effect, but with the Mille Miglia, it is the added sense that one is taking part, somehow, in history, as past and present collide. The parade of cars is a colourful spectacle, of Ford Thunderbirds and other models long since relegated to the annals of history – cars by makers such as Austin-Healey, OM, Lancia, BNC, Riley, Siata and Sunbeam roll on by, alongside grand tourers by the likes of Maserati, Fiat, Renault, Saab, BMW, Alfa Romeo, and Jaguar. There’s even a Triumph TR3.

Scheufele himself has been driving a 1957 silver Porsche 550 Spyder A/1500 RS in recent years, with his regular navigator, none other than ‘Monsieur Le Mans’, the racing great, Belgian Jacky Ickx (this year followed closely in the lineup by German sports car racer Timo Bernhard and Hollywood actor-turned-artist Adrien Brody in a 1955 Porsche 356 1500). “That Porsche Spyder is not just an icon, I love to drive it,” says Scheufele. “It’s light, and nimble, it’s just a delight to drive.” And delight is precisely the concept of this race. It has made the Mille Miglia such an enduring and significant event on the international racing calendar. As any classic car aficionado will tell you, the joy is in the handling of a purely mechanical engine, an analogue driving experience with electronics, no power steering, no ABS brakes (in fact, barely any brakes at all in the modern sense of the word), no traction control to help you out if you get a corner wrong, and in the pure physicality of driving in an age of ever-increasing automation. It is also quite something to see these cars out and ‘alive’, and not as static museum exhibits. “The experience here is a tangible one,” says Scheufele. “You can open the hood of these cars and understand what’s going on. In a modern car, often you simply have no idea, everything is managed by electronic equipment. I think the classic car is one of the last areas in which you can actually experience an element of freedom in taking it out on the road.” Imagine the sight of a gorgeous two-tone 1931 Alfa Romeo 6C 1750 GS Aprile, a bright green supercharged MG C-Type from 1932 or a 1954 lemon-yellow Lincoln Capri (although the most popular car by far is the mid-1950s Mercedes-Benz 300 SL ‘Gullwing’ Coupé, of Stirling Moss fame).

Read more: A journey to the Kimberley with Geoffrey Kent

Nobody seems to consider that the Mille Miglia could result in damage to some very expensive vintage machinery. “Back when the first enthusiasts came to the Mille Miglia, I don’t think they were really considering their cars as investments,” says Scheufele. “Even today, I personally consider my cars to be firstly objects for my passion, and then on a secondary level I think, OK, they have increased in value, but I would never buy a car for that reason alone, just as I would never buy a painting for that reason – but some people do!”

Looking to the future, however, Scheufele is keen to maintain quality over ambitious expansion plans. “Now, I think the challenge for the Mille Miglia is to maintain this standard, and in one sense, not to grow any further,” muses Scheufele. “There are many logistical challenges to getting this caravan around Italy while offering every participant a reasonable level of quality, and I think that can only be achieved by tightly reviewing the number of participants that take part.”

So, let’s go back to that balmy spring day. As the sun sets and the last of the cars have set off, the heavens open and rain pelts down on the Lombardy landscape. Those of us warm and safe indoors spare a thought for the many open-top cars and the drivers who are currently getting soaked – although for them, it’s all part of the authenticity of the experience. But when the next morning dawns warm and dry, and the sun shines over Italy and the wind is in your hair and your engine is purring, could there be anything more glorious?