Jeff Koons is the world’s most expensive living artist, creating works that reflect modern life in their interplay with kitsch, materials and art history. Koons chats to Millie Walton about communication, how art brings the sublime into the everyday and pink inflatable rabbits

Jeff Koons is making me sweat. He’s ten minutes late to our Zoom meeting, and at this stage, I’m unsure whether he’s forgotten, or I’m unwittingly engaged in some kind of power play.

Something I realised in preparing for this interview is that almost everyone has something to say about either Jeff Koons as a person or his work. One of my favourite anecdotes goes something like this: “My friend went to a house party and had sex beneath a Jeff Koons, and said it was the way they’d like to die someday.” When I heard it, I thought that’s probably exactly the type of story an artist who is famed for making explicit artworks of himself and his ex-wife Ilona Staller (who was also a porn star known as La Cicciolina) and shiny balloon sculptures would love to retell to fawning art collectors at swanky gallery openings in New York. It’s hard not to make assumptions about one of the world’s most famous and controversial artists. A young, attractive woman (one of Koons’s studio assistants, perhaps) enters the screen to test the audio and camera, before he finally sits down, checks his ‘earpods’ are in place and gives me a Hollywood smile. At 66 years old, with gleaming white teeth, a full head of hair, barely any visible wrinkles and the glow of health, Koons could pass for early forties. He speaks precisely and slowly, maintaining eye contact and frequently dropping my name into the conversation, which has the destabilising effect of making everything he says seem both deeply profound and strangely orchestrated. “Millie,” he says mysteriously at one point. “What’s really interesting and beautiful about art is that what’s relevant and new is really quite ancient.” Rising to prominence in the mid-1980s in New York, alongside Jean-Michel Basquiat, Richard Prince and Keith Haring, Koons has long advocated the idea of ‘accessible’ art. He takes everyday objects and pop icons as his subjects, often rendering them at a huge scale to disrupt cultural hierarchies and unsettle the viewer’s sense of perception. Of the making of Michael Jackson and Bubbles (1988), for example, a white and gold porcelain sculpture of the musician and his monkey, the artist says, “I was really trying to make a connection with Renaissance sculpture and to show that something we can acquire in a gift shop can have this important meaning to us in life, and as much relevance to excite and stimulate us as the Pietà.”

Over the years, critics haven’t been so open-minded. His work has been variously labelled as “vacuous”, “crude” and “lazy”, but this has only increased his popularity. In 2019, Rabbit (1986), a metre-tall stainless-steel copy of a plastic inflatable bunny, sold for more than $91 million at Christie’s, breaking the record for a work by a living artist sold at auction set in 2018 by David Hockney’s 1972 painting Portrait of an Artist (Pool with Two Figures), a record previously held by Koons himself. That might seem like an eye-watering price, but his work is highly technical and expensive to produce, which has, in the past, led to delays in completion and major lawsuits. In 2018, billionaire financier Steven Tananbaum sued Gagosian over the delayed delivery of three of the artist’s sculptures. Then, earlier this year, the artist shocked the art world by announcing his decision to drop both Gagosian and David Zwirner and to be represented worldwide exclusively by Pace Gallery, stating, “The most important thing to me is the production of my work and to see these artworks realised”. The desirability of his work comes not just from the promise of drama and luxury. There’s also an appealing sense of playfulness, nostalgia and recognition to be found in his vibrant colours and simple visual language that recalls a childlike innocence. “When we’re young, we’re more curious. We absorb tremendous amounts of information very quickly because we’re open,” he says. “Eventually, people start shutting down and making all of these judgements. I try to open myself up to everything.”

Koons is a ‘conceptual’ artist: a visionary, rather than a maker. He has multiple studios and a team of more than fifty people producing the ideas that he dreams up. It’s an approach to art-making that allows him to “have feelings and sensations, but not to be dependent on the hand”. It also allows him to pursue “Duchampian ideas” by taking a more “objective” viewpoint. Whether one can truly detach oneself from one’s own thoughts is debatable, but what’s important is the intention behind the work and, for Koons, that often comes from a personal experience or encounter with a material, colour or form. As a younger artist, for example, he recalls buying a pink inflatable rabbit and a yellow and green inflatable flower which he placed on mirrors propped up against the wall. “The colour, the reflection and this association was so intense, I had to go have a couple of beers to really come down from the excitement,” he says. 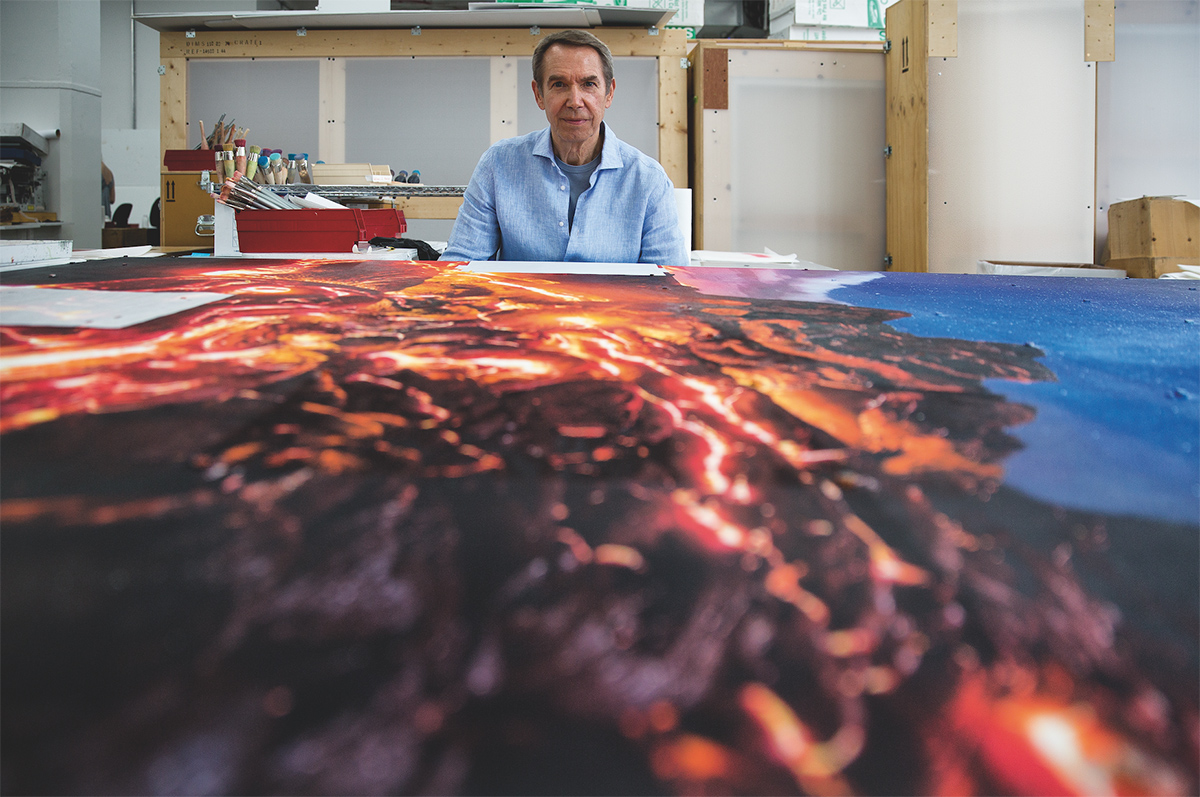 Koons photographed in his Manhattan studio in 2021 with a work in progress. Photograph by David Taggart

His focus now is more on being in dialogue with the viewer than himself. “There’s joy in sharing the human potential with others, instead of just with the self,” he says. This idea of exchange is perhaps most evident in the artist’s ‘Gazing Ball’ series (2012–) in which he places a blue, mirrored, hand-blown glass gazing ball within a classical piece of art, such as Leonardo’s Mona Lisa. The ball reflects the surroundings and the viewer, literally drawing them into the work of art. For Koons, the object relates to his childhood in York, Pennsylvania where he recalls seeing gazing balls in people’s gardens. “I’ve always loved the generosity of [the gazing ball], but also that it’s a lawn ornament. It’s something that can be looked at in a very profound way and at the same time it’s frivolous,” he says. The same could be said for many of Koons’s sculptures, which, at the very least, teach us that outward appearances can both charm and deceive. The reason he so often works with stainless steel is that it’s both highly durable – “A kind of a proletarian material; if people wanted to melt [the works] down to make spoons, forks, pots and pans, they could,” he says – and shiny in appearance. One of the artist’s most iconic pieces, Balloon Dog, explicitly plays with these material qualities by suggesting the bulging soft surface and lightness of a balloon while harnessing the sculptural strength of the metal. “Only the surface has a visual luxury, and when I say a visual luxury, I’m speaking about the excitement of stimulation, reflection, abstraction and change,” he explains. “That’s the type of luxury that my works are interested in.” Has the material worth of his work changed the way he feels about his practice, and art in general? “I love art, I love the idea of how it can really better the lives of people as an educational tool. It informs us, not only of our history, but of all the human disciplines, how we can incorporate them, fit them into our lives. It’s always a dialogue about becoming,” he says. “If the market, at some point, became interested in me, I’d like to believe it was because I was able to communicate some of those ideas to people, and that they found relevance in the belief of this type of transcendence.”

« Previous article
A new photography prize for sustainability is launched
Next Article »
Big Boy Blue: In the Studio with Idris Khan