No detail is small enough to escape Ferrari designer Flavio Manzoni’s razor-sharp focus. Rachael Taylor discovers how his expertise in supercar design lends itself masterfully to the Hublot and Ferrari watch collaboration

In the Ferrari Maranello plant in northern Italy, you will often find Flavio Manzoni and his team convening at a ten-metre-tall LED wall display. The images they’re looking at are often enormously scaled-up photographs of the miniscule parts of a Ferrari engine or exterior. The extreme magnification is used to perfect infinitesimal details you might never notice should you take the car for a spin. And this, says Manzoni, is the essence of luxury design.

“The luxury of a Ferrari is more a consequence than an objective,” says Manzoni, the car manufacturer’s senior vice president of design, who this year accepted the Red Dot Design Team of the Year award. “There are two perspectives [of design]. One is from the distance, where you see the whole harmony of the object. The other is with the lens, when you magnify every element and put a lot of art into every single detail.”

Focusing on each and every element – no matter how small – and making sure that it not only performs brilliantly, but is also aesthetically exciting, is what makes Ferrari cars among the most sought-after, and expensive, in the world. It is also this zoomed-in approach to design that has made the switch to designing watches a seamless transition for Manzoni.

Manzoni joined Ferrari in 2010. The following year, he was working on a top-secret project for the company’s first hybrid sportscar, LaFerrari, when he was also brought in to oversee the development of a watch in collaboration with Swiss atelier Hublot. He kicked off their first meeting with a rejection. Award-winning designer Flavio Manzoni has been with Ferrari since 2010

“At the beginning, their idea was to propose some concepts to us,” says Manzoni. “They wanted to draw inspiration from the central shape of a Ferrari, the dynamic shape, but my idea was to avoid that because it makes no sense to give an aerodynamic shape to a watch.”

Instead, he wanted the Hublot team to look beyond the obvious and dive deep with him into the romance of the details. “I tried to guide the research towards the technical beauty of certain mechanical components of a Ferrari, like the engine for example.” 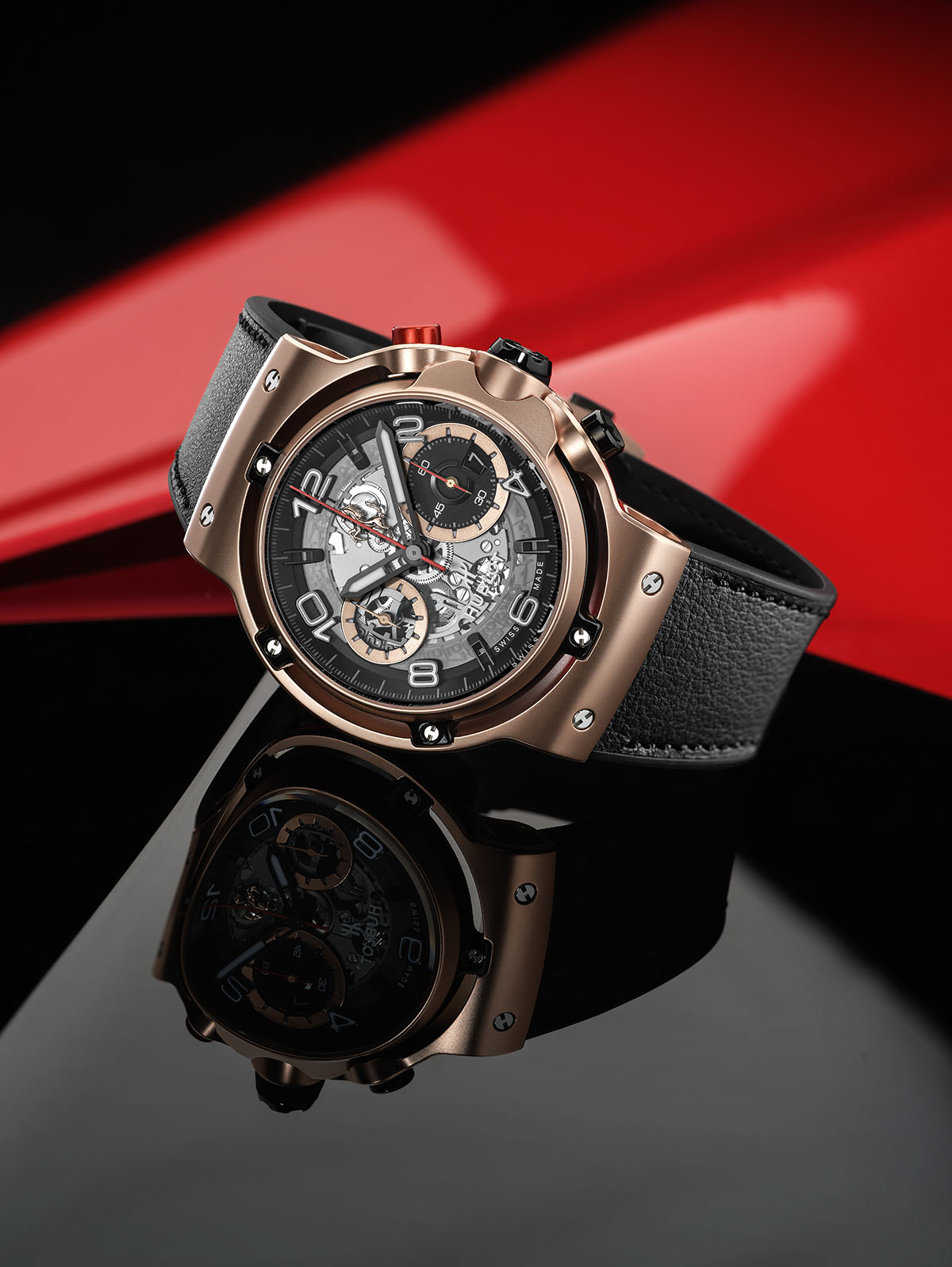 The result – the Hublot MP-05 LaFerrari watch – was spectacular. A tapered, angular case covered entirely with sapphire crystal, showed off the inner workings of an unusual movement, with the time displayed on off-centre cylinders rather than hands. In place of the traditional flat cogs and springs, an industrial-looking central column of gleaming aluminium barrels gave the impression of a watch that revs rather than ticks. Being Ferrari, performance excellence was important too, and a super- charged power reserve function was created that allowed the mechanical tourbillon watch to carry on ticking off the wrist for what was, at the time, a record 50 days. “I think they attract customers because of their uniqueness,” says Manzoni of the Hublot Ferrari watches, which he believes appeal to a much wider audience than the Ferrari fan base. “They speak out from the mass in the field of watchmaking because they are different. We try to use an out-of-the box approach, which comes from the attitude that we have towards our cars.”

It has been eight years since Hublot and Ferrari first joined forces, and Manzoni and his team have very much taken control of the design process. They select which movements to build around, and work up 3D models of prospective timepieces before presenting the concepts to Hublot. Each watch produced (using that same digital ‘wall’ for extreme close ups) continues to focus on the details of Ferraris – the ceramic carbon brake discs, the peccary leather seats – and often uses the same materials that are lavished on the supercars. No flourish is too small to champion, and it gives the team a platform to celebrate much-considered elements of the cars that might otherwise be overlooked simply as pleasant minutiae. This year, Scuderia Ferrari is celebrating 90 years of making supercars, and to celebrate, three Hublot Ferrari watches have been released to mark its past, present and future. Each a twist on Hublot’s popular Big Bang model, the trio of timepieces are all powered by a UNICO movement with a flyback chronograph that offers a 72-hour power reserve and are anchored with bezels cut from the same ceramic carbon that helps Ferrari’s cars to screech to a halt. 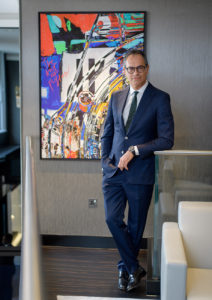 The first watch in the series recalls long- past glory days with a brushed platinum case to echo the dashboards of classic Scuderia Ferrari models, as well as a leather strap and bright-yellow markers and hands to bring to mind old-fashioned speedometers. The model celebrating the here and now does so with a 3D carbon case and a strap made from Nomex, the fire-resistant material Ferrari drivers rely on to keep their suits from going up in flames.

The third watch, the one that nods towards what Ferraris might look like in the future, uses sapphire crystal to create a see-through case that exposes its inner workings. The futurist aesthetic is continued with a strap made from Kevlar, a composite material that Ferrari uses to protect its carbon-fibre chassis from stones spraying up from the road.

The latest automotive launch from Ferrari is the SF90 Stradale hybrid, an evolution of the LaFerrari that inspired that first Hublot Ferrari watch. So are we likely to see this latest model transformed into a wrist-ready format? “I don’t think that there will be a literal translation, but for sure there will be some inspiration,” muses Manzoni, who never feels bound to tie the latest watches into the latest cars. “It’s always nice to create cultural bridges between different disciplines.”