William Kentridge, “The Refusal of Time” 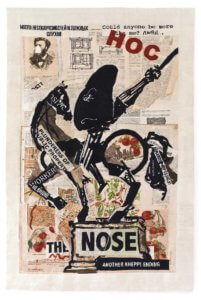 Travelling from the Whitechapel Gallery in London to Museum der Moderne , Salzburg, “Thick Time” by William Kentridge is an intriguing and comprehensive exhibition investigating the South African artist’s multimedia dialogues with themes such as colonialism, racial capitalism and revolution. Sketchy, charcoal animations, video installations and drawings fill both of the museum’s spaces in a giddy insight into Kentridge’s complex and macabre aesthetic.

Yet it’s the theatrical elements that are perhaps the most captivating and revealing. As an actor, producer, set and costume designer, Kentridge’s visual art is heavily influenced by performance and narrative; the exhibition’s opening was timed to coincide with the premiere of Kentridge’s production of “Wozzeck” at the Salzburg Festival and tracks the artist’s theatrical career from the late 1970s to present through a display of posters, designs, models and costumes. Kentridge is a maker of worlds. His work across all mediums is textured, dark and completely consuming.