Two of the rescued elephants at the Four Seasons Tented Camp

Digital Editor Millie Walton steps into a nostalgic world of romance at the Four Seasons Tented Camp in the Golden Triangle region of Thailand to learn more about life in the jungle and to meet the resident elephants who have been rescued from the nastier side of the country’s tourism industry.

It’s just after sunrise and the sky is bleary eyed. The sunlight shines through the haze over the jungle and the morning song of the cicadas reverberates rounds us. We’re at the northernmost edge of Thailand on the banks of the Ruak River, overlooking Myanmar straight ahead, to the right is Laos and beyond that the distant mountains of China. Our safari tent is high up in the trees, a secluded hide-out harkening back to 19th-century style travel with hardwood floors, leather furnishings, intricate hammered metal surfaces, hurricane lamps, a grand stand-alone bathtub and an outdoor shower. It’s indescribably romantic. Minutes after arriving, by long-tail boat skimming gracefully over the dark green water of the river that visibly changes shade as you enter into the thin strip separating Thailand and Myanmar, we were cast into a narrative of old-world adventurers. This is the Four Seasons Tented Camp Golden Triangle, a natural retreat and foundation for rehabilitated elephants. Elephants are one of Thailand’s most popular tourist attractions with so-called “sanctuaries” flogging package experiences where you can bathe and ride an elephant. But what most visitors don’t realise is that many of these highly-intelligent animals are illegally captured, separated from their families and forcibly tamed through cruel training practices involving beatings and stabbing with bull-hooks. The Four Seasons in partnership with the Golden Triangle Asian Elephant Foundation works hard to rescue such mistreated elephants, providing them with a loving home in a humane and natural environment where they are cared for by their own mahout. They’re still used for trekking, as they cannot be released back into the wild, but it’s gentle work and only voice commands are used. 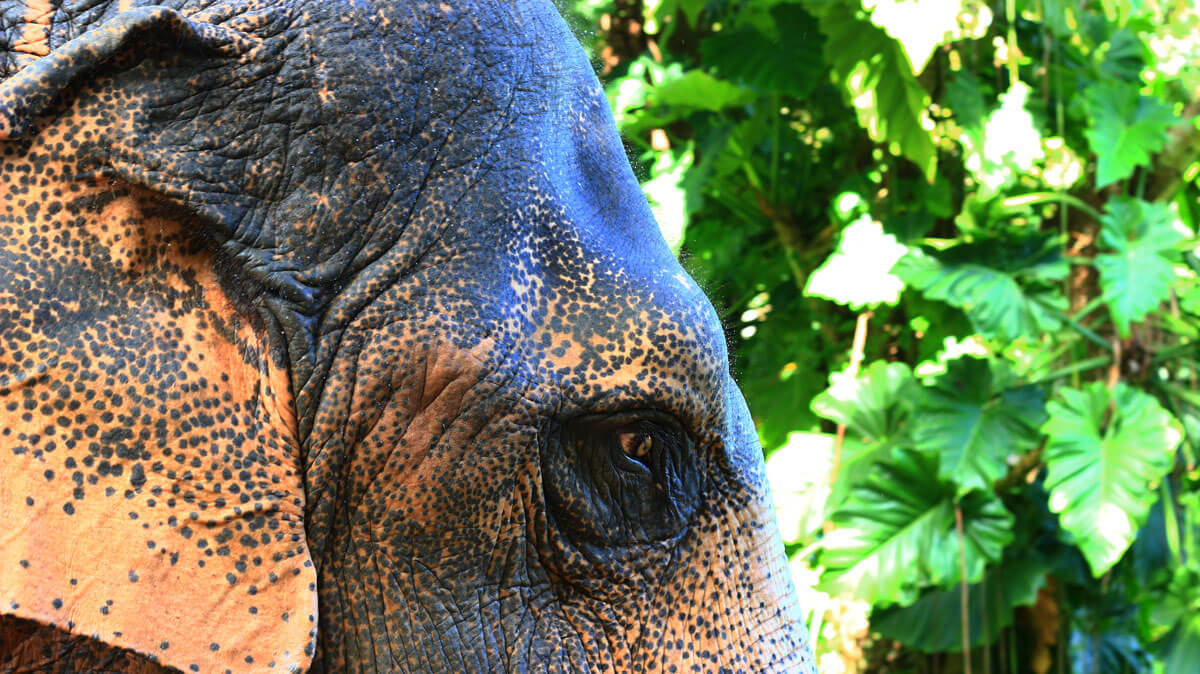 At breakfast, I’m nudged on the back by the tip of a long trunk. I pick up a banana from the table and very gently the trunk plucks it from my hand, curls under and feeds it into a gaping mouth before returning for more. The grace and patience of such a huge animal is overwhelming. “Yuki is cheeky,” Rain, one of the resort’s tour guide tells us as we sit down to eat. “When I was her mahout, she used to pull me down off her back with her trunk.” He laughs, and we smile weakly taking in the towering height of the elephant, the largest of herd and the youngest of the group, but it’s an important reminder that whilst these elephants are trained, they’re still animals and you have to earn their respect and trust, especially since many have had bad experiences with people in the past. A Mahout sits with two elephants at breakfast

Later, we’re standing in a barn ready for our own training. We’re dressed in the traditional Mahout costume – matching blue denim shirt and trousers – that the elephants are familiar with, as one of the camp’s mahouts talks to use about handling the elephants: “You can stroke them, but don’t try to hug their trunks, the underside is very sensitive,” he explains, patting the side of a huge cheek. “Speak softly, but firmly and try to avoid speaking too loudly or shouting around the elephants.” We all nod silently. Then he demonstrates how to climb onto the elephant’s back in three different ways. “Okay, now you’re go,” he points at me. On command, Puang Phet, my elephant for the afternoon, slowly lowers her head, and with help, I vault behind her ears so that I’m sitting backwards. Feeling slightly dizzy, I cautiously turn myself around. We trek slowly to the river that afternoon, for the elephants to bathe with us clinging on their backs as they squirt water at us and plunge their heads beneath the surface. It’s an honour to be so close to such beautiful animals and whilst I still wince at the thought of elephants being held in captivity, it’s obvious the mahouts at the camp deeply care for their elephants and have developed a relationship of mutual respect. It’s humbling to be around. Bathing in the water with the elephants

Read next: Why Chiang Mai is Asia’s hottest city In the evening, we wander along the lamp lit path, deeper into the jungle, to the spa for open air massage on a private suite deck surrounded by the bubbling sound of frogs. The therapists, like the rest of the camp’s staff, are locals from the Golden Triangle region who have grown up in the exotic wilderness of Northern Thailand, foraging plants for natural remedies, cooking and healing. Thai women are traditionally taught the art of massage from an early age so they are experts at what they do and so serene that they diffuse calm into the atmosphere as they move, gently washing our feet with kaffir lime before guiding us to the treatment beds. For the massage, I choose a sensual blend of ylang-ylang and jasmine oil. The oils used are all natural, with many homegrown on the premises, as we’re shown on a foraging walk the next day, and we’re advised to leave them to sink into our skin for a few hours to enhance the benefits so we arrive at the Burma Bar that night glistening. It’s here guests meet for cocktails and canapés before being given a lift to the wine cellar in the camp’s jeep for cheese and wine tasting, followed by a long, indulgent dinner at the rustic Nong Yao restaurant. It’s all very casual and relaxed, even more so since it’s all-inclusive with a limited menu so that you don’t spend ages agonising over which wine to order with which dish, and the hearty cuisine is divided into Asian and Western options – the chef’s Gaeng Kiew Warn Goong (green curry prawns) is the best I’ve ever tasted: fresh, rich and flavoursome. We find our tent has been prepared for nighttime with a plate of local sweet treats to try before bed and the back and sides zipped down providing privacy, with the front still open so that we can watch the fireflies dancing in the dark and fall asleep to the sound of wild. It’s a beautiful example of how luxury and nature can live harmoniously. Whilst there are plenty of resorts are built into unique and stunning settings elsewhere in the world, there are few that manage to present the highest level of indulgence and service as the sideline attraction to the natural wonder of its surroundings and the majestic animals that share the space. It’s a truly unforgettable place.

All images by James Houston