This month sees the latest edition of the annual Auction Napa Valley, one of the most lavish and interesting events on the world’s charity and wine calendars. LUX editor Kitty Harris, who attended last year’s event as a guest of honour, recalls about her time spent drinking some of the world’s finest wines, dancing the tango at sunset on a hillside vineyard and witnessing the enormous generosity of connoisseurs and winemakers alike over the four-day event

Setting my bags down in the quaint Sutter Home lodge is like stepping back in time to the 1970s – when Sutter created the first White Zinfandel, a style of cheap and cheerful wine which I suspect is not going to be on any of the menus for my next five days. I’m told that every evening I will get a bottle of fine wine to take to my room or to enjoy on the wooden white porch. I opt for a glass of the house’s Californian Riesling while I prepare for my evening of festivities; I am told to wear white for Argentinian tango and dinner.

My host for the evening, Argentine Delia Viader, earned her title as the ‘Wine Mother’ after founding Viader in 1986 when she created her eponymous estate on the slopes of Howell Mountain, on the east side of Napa Valley, and soon gained worldwide renown for her highly-structured, Bordeaux-style reds. 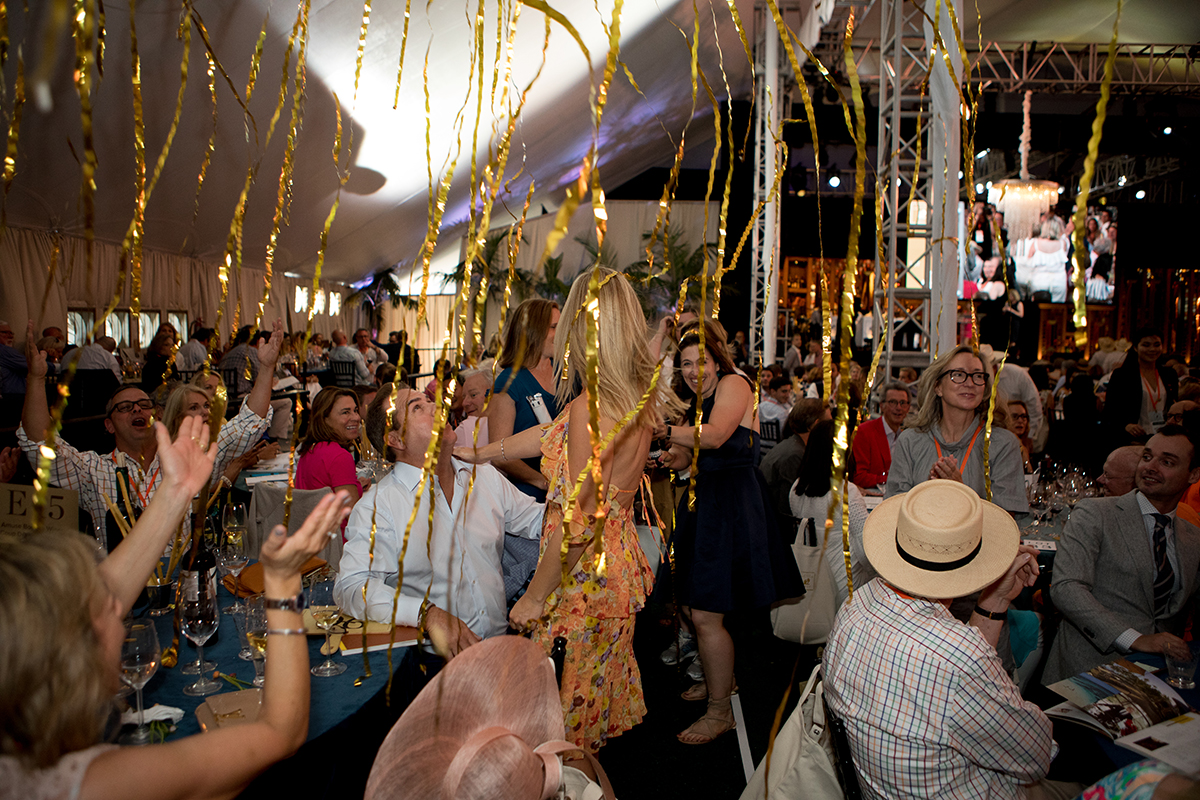 We are served Viader’s estate blend, made of 40 percent Cabernet Franc and 60 percent Cabernet Sauvignon, that evening; now ranking among Napa’s most esteemed wines, it is powerful yet restrained, a wine that combines California’s sunny fruit with a certain French hauteur. There is a mix of guests from around the world, and I (the only Londoner) sit around five tables with white table cloths below the shadows of trees for the evening meal. Argentinian style steaks and are served before we try our luck following the steps of the tango teachers. If there were any hesitations to begin with, all fears were lost as we happily swapped dance partners whilst the sun set behind the hills.

Auction Napa Valley is a phenomenon. The four-day fete raises money for 25 local Napa Valley nonprofits and strategic initiatives for the benefit of children and community health. Since 1981 they have invested $180 million into the area. The first evening, usually a Thursday, sees Napa’s vintners invite guests to dine with them at their estates. During Friday afternoon the live barrel auction is held at a different location each year depending on which estate hosts the events – this years is Charles Krug and last years was Francis Ford Coppola. Early Saturday evening the auction begins, prizes included a private dinner at The Restaurant at Meadowood’s Christopher Kostow, one of the youngest chefs to ever earn three Michelin stars’ and the chance to travel on the Coppola family’s private jet and a four-night stay at their hotel Palazzo Margherita in Italy. The event is attended by residents of Napa who range from Oscar winning director, Mr. Coppola, to venture capitalists Steven and Claire Stull and celebrities such as Oprah and Michelle Pfeiffer.

Napa Valley Vintners, the nonprofit trade association who organise the auction, are my hosts for the weekend. Brian, my driver, picks me up the following morning for an adventure. We drive we pass a gigantic (35-foot tall!) stainless steel Bunny called ‘Foo Foo’, which I later learn was created by the English artist Lawrence Argent. This is one of the 35 pieces of contemporary art on show at the HALL winery. The 150-year-old site is owned by Craig and Kathryn Hall who compered a treasure hunt for us that morning. The 30 odd guests divided into groups and were given an iPhone with a pre-programmed game to follow. Tasks at different levels of the game included recreating your favourite music album cover – my team opted for the famous Beatles scene walking over the Abbey Road zebra crossing – and blending your own wine which was judged by the in-house wine maker. Sadly, I didn’t win, though I thoroughly enjoyed the vineyard’s classic Bordeaux varietals.

Francis Ford Coppola (director of ‘The Godfather’) and his wife, Eleanor and two children Roman and Sofia were the honorary chairs of the four-day fete. 2,000 guests frequented their historic Inglenook estate for the Napa Valley Barrel Auction which took place in the winery’s caves. The cool – in every sense of the word – atmosphere of the caves saw bidders vie for the 108 lots of 10 single cases of current Napa Valley wines. There was a buzz in the air, an energy and excitement that wasn’t just from the wines. Outside in the mid-day heat, canopies kept the crowds covered and wines were flowing in areas according to their blends. Food stalls with grilled scallops, bursting with flavour, were served alongside freshly rolled sushi and tempura.

Read more: California takes on Chateau Latour and the world at an exclusive LUX wine tasting on Lake Como

For a little respite, I headed to Health Spa Napa Valley to revitalise before the weekend’s pièce de résistance: the live auction. Held at five-star hotel Meadowood Napa Valley, the host venue since 1981, the auction began under an enormous white tent in the theme of a 1930s nightclub, complete with a live jazz band. The top single lot was donated by Dalla Valle Vineyards: a week-long trip with the co-proprietor Naoko Dalla Valle to some of her favourite spots in her native Japan. Dalla Valle is a modern Napa legend, an estate situated on the Rutherford Bench, an area just above the river and below the steep valley sides on the east side of the valley, which some connoisseurs think of as the ‘first growth’ stretch of the valley, infusing its greatest wines with an almost imperceptible hint of ethereal ‘Rutherford dust’.

The highest-bidding lot was from Colgin Cellars, another Napa legend created by the redoubtable Anne Colgin, and included Colgin wines and trips to both Champagne and Napa. The bidding was vigorous with an astounding $15.7 million raised in one evening. Following the live auction we moved to the garden for a candle lit al-fresco dinner of Italian family favourites prepared by Francis Coppola himself. The evening ended on the dance floor with a private performance by soul singer-songwriter Leon Bridges of Texas. The weekend went by in a flurry of excitement with a gentle buzz from the wines. And the fun wasn’t over: sampling cult wines from the Screaming Eagle winery, possibly Napa’s most famous (and most expensive) and the rounded hillside merlots from Shafer with the proprietors themselves was a privilege, inside the dreamscape that is Auction Napa Valley.