Artists to watch in 2021: Antonia Showering 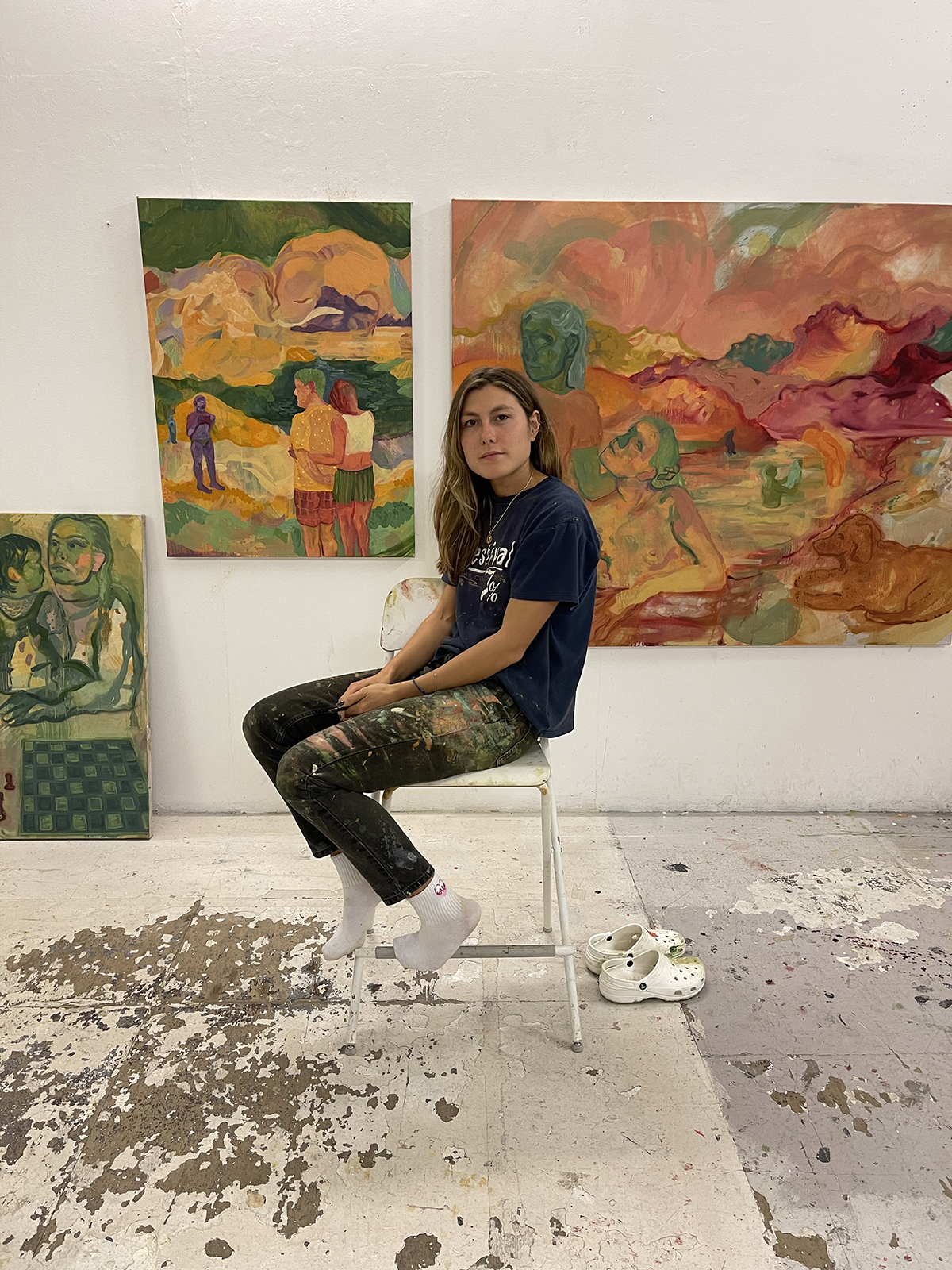 As is so often the case these days, I first discovered Antonia Showering’s work on Instagram. It was serendipitous to meet her in person not long after, at a lunch at Timothy Taylor gallery. We sat right across from each other and found out that we happen to be neighbours in North London.

Antonia’s paintings are contemporary yet classical – Les Nabis, a group of young French painters working in the late 19th century who played a key role in transitioning from Impressionism to Symbolism and later, to Abstraction, are one of her key sources of inspiration.

To me, Antonia’s work feels symbolist in the way she expresses emotion rather than representing specific events. At the same time, her paintings tend to be based on lived experiences and real encounters while her abstract use of colour is sometimes reminiscent of Etel Adnan.

Ahead of a solo exhibition with Timothy Taylor gallery next year, I visited her East London studio (which is, coincidentally, opposite Sofia Mitsola’s studio whom I interviewed earlier this year) to view her latest works and discuss her process.

LUX: To me, your work feels like it’s embedded in classical painting as your subjects are quite traditional: landscapes, people and sometimes, dogs. What period of art history is most inspiring to you?
Antonia Showering: From a young age I have repeatedly painted significant figures inhabiting personal landscapes, but I can see what you mean about there being a classical element to the chosen imagery in my work, especially with the recurring motif of water and people bathing although this is perhaps more closely linked to how I feel adults behave when they are in water: they bob and splash around in a playful, clumsy, almost childlike way. It feels as if lakes, ponds and rivers are spaces where we are allowed to become infants again, even if just for a moment. Les Nabis are a group from the late 1800s who depict people bathing beautifully. I really enjoy the way these artists handled colour and how the human figure was simplified. 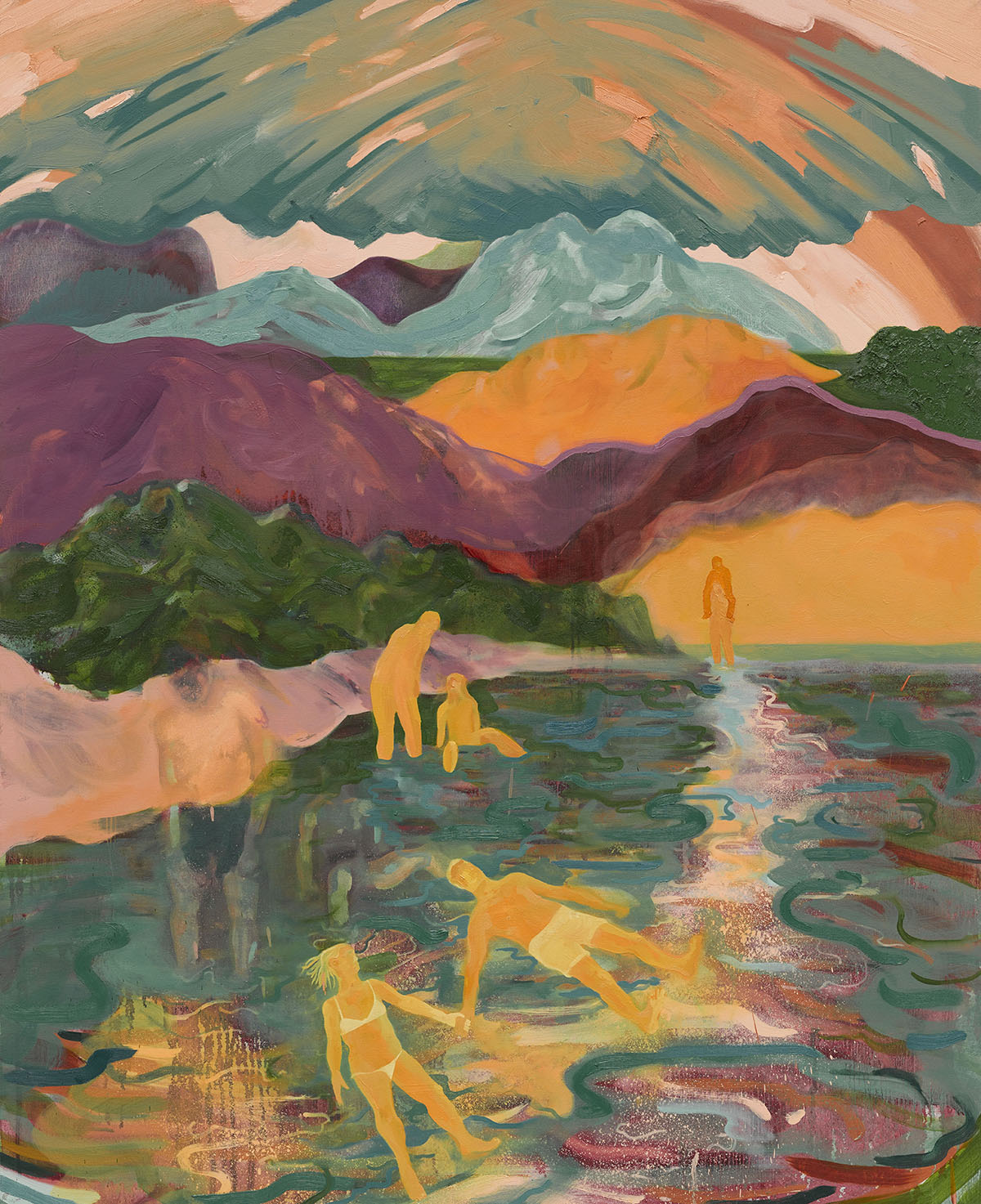 LUX: Who are your favourite artists?
Antonia Showering: There are so many! Piero della Francesca for his depiction of the face; Edward Munch for his timeless, transcending handling of emotion; Leonor Fini for her exploration of fantasy; Andrew Wyeth for his narratives; and Alice Neel for how she captured relationships between sitters as well as more contemporary painters like Hurvin Anderson, Tracey Emin, Tim Stoner, Lynette Yiadom-Boakye, Celia Paul and Chantal Joffe.

Read more: In conversation with the world’s most expensive living artist Jeff Koons

LUX: Let’s talk about your own cultural heritage. What’s your background?
Antonia Showering: The majority of my childhood was spent in Somerset where my father’s family are from, while my mother’s parents lived in London – they played a huge role in my discovery of art. My Swiss grandmother was a history of art teacher for many years and she married my grandfather, who’s Chinese, in the 1960s. He was an architect and a phenomenal draughtsman who taught me how to draw. I have many memories visiting them as a child – their house was very minimal with no clutter and definitely no toys, so I would occupy myself by drawing families, cutting them out and playing with them. I really enjoyed creating these new worlds where the possibilities within them were endless. LUX: What do you want to express through your work?
Antonia Showering: I want my paintings to capture the mood of transitory moments where trauma, worries and hopeful possibilities can coexist in one moment or image. I see the canvas as a physical space where feelings of belonging or displacement, love or loneliness, intergenerational memory, superstitions and regrets can be turned into something visual and shared with the viewer. Giving exact details of who the characters in my paintings are and what the objects included mean is something I try to avoid because it prevents ambiguity and often the meaning of the painting can shift and adopt new connotations over time. I also find other people’s interpretations of my work interesting and important. It reminds me of when several people recall an event and how much they all differ from one another; this slippage of memory is fascinating and a big part of my work. LUX: Who are the people in your paintings?
Antonia Showering: They are almost always people I know. Sometimes I only learn who the characters in my paintings are months after making the work. However, as mentioned in my previous answer, I think it is important for me to not to be too direct in saying “This is a painting of my younger brother holding his daughter” because it closes off the image to the viewer. A parent holding a child is a universal motif and one at some point in our lives we may have observed and taken away something from a comparable moment. Although my works are dealing with significant personal recollections, fears or imaginings once the painting begins to develop it becomes its own entity and holds a new meaning for both me and the person viewing the work.

LUX: Can you tell me a bit about your painting process?
Antonia Showering: My paintings go through quite a few different stages. After I stretch the canvas, I lay it flat on the floor and add a layer of distemper (sizer with white pigment). This is poured, dripped and applied very automatically and once this dries I used these initial marks to direct me to the first of many compositions. The paintings often begin as abstract images where I am solely focusing on colour relationships and marks. It isn’t until later that I focus on the figures that populate these spaces and their own relationships. I want to try to build atmospheres within the landscapes or domestic settings. LUX: How do you decide when a painting is finished?
Antonia Showering: I wish I was someone who confidently daubs their final mark and stands back and says, “Yes, that’s finished” but in reality, I am a lot more hesitant. As the painting draws to an end, I have noticed the speed at which marks are added dramatically slows down. I know a painting is finished because the feeling I wanted to make visual is there in front of me, but I will still spend hours debating whether a thin, barely noticeable mark needs to stay or go. I think this is because a part of me enjoyed the journey and challenges of making the work so much that when I finally arrive at the finishing point there is a small feeling of attachment as well as relief.

LUX: Do you listen to music or podcasts while you paint?
Antonia Showering: I almost always listen to music – I find podcasts a little distracting. A song I have been binging on recently is called ‘Dance With Me’ by Deux. LUX: Who is your London peer group? You mentioned to me before that you have critiquing sessions?
Antonia Showering: I studied art in London for seven years and over that time, I have built lots of special friendships with other artists and people in the art world. Before the pandemic a few of us had a crit group where we would visit each other’s studios and talk about new work. The group included Sofia Mitsola, Emma Fineman, Patrick Jones, Alvin Ong and Kostas Sklaventis. It is important to have a space to discuss our practices in that way because it can be very isolating spending all day and night in the studio!

I have also been in a couple of shows put on by Max Prus with Jack Killick and Hannah Bays. There are a lot of exciting people making work in London right now and I’m glad to be a part of it. Katy Hessel has become a close friend of mine and she organised a residency in Italy at Palazzo Monti in 2018 with Flora Yukhnovich and Kate Dunn whose paintings I admire. I also love the work of Diane Chappalley, Ben Jamie, Laurence Owen and too many others to mention.