A ski-in, ski-out residence complete with Martini bar and pool sounds very Rocky Mountains, yet L’Amara is a spectacular addition to one of the most traditional skiing regions of France, as Darius Sanai discovers 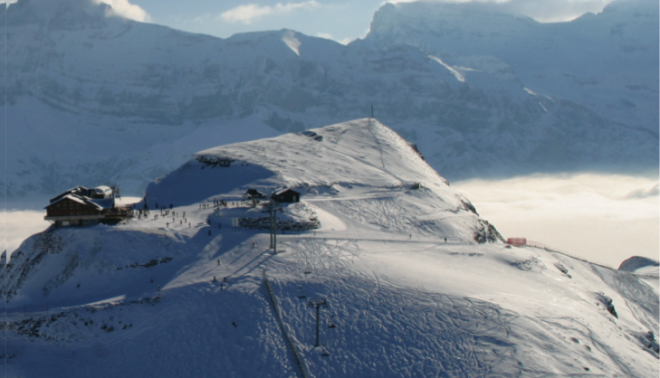 How do you like to take your Alpine winter holiday? I suspect that cosmopolitan readers of LUX like to ski in the Alps, as well as put carbon fibre on snow in Colorado, Idaho and Hokkaido. There is something about the home of skiing, the crescent of mountains that rises out of the Mediterranean above Nice and sweeps through France, Switzerland, northern Italy and Austria before petering out, like the Turks, at the gates of Vienna, that is more concentrated, more alive with possibility and atmosphere, than anywhere else. The powder may be deeper in Niseko, the back country bigger in British Columbia, the whole experience more effortless in Aspen: but the Alps are where the story started, and where it evolved and continues to evolve. (Snowboarders have a different tale to tell, but not that many of you are boarders.)

If you are of one generation of wealth, you may stay in a hotel in St Moritz, Lech or Gstaad. Another, and you will be pounding the new hotels of Courchevel (see our helpful tongue- in-cheek guide at the end of this article). Or you may instead take over a whole chalet in Zermatt or Verbier. One rung down from the gourmet-catered chalets are the traditional French ski holiday chalets, cheerfully run by a chalet girl fresh out of British boarding school, happily burning the scrambled eggs and fighting off the advances of a soon-to-be-retired chartered surveyor from Surrey while his family occupies the Jacuzzi.

While there is no shortage of grand hotels, old and new, and chalets of every style, what the Alps have largely lacked is sophisticated, concierge-led residences in the American style, where you have a kitchen and living room, an in-residence pool, and a proper reception/bar/ restaurant downstairs, hotel-style. Until recently. L’Amara, one such development, opened last year to a considerable buzz in the French resort of Avoriaz. Avoriaz itself, located at a very high 1,800m on a mountainside above a deep valley, in which lies its mother resort of Morzine, has undergone something of a rebranding in recent years, shedding its 1960s middle-middle-class French bourgeoisie image and turning more contemporary and upmarket. L’Amara is in an extension of the main village, on a ledge overlooking Morzine (rather satisfying, if, as during our stay, there is deep snow all around but the grey of rain far down below).

When booking we did wonder whether being a) high on a ledge, and b) 500m from the main part of Avoriaz would be an issue, and this is a good demonstration of how even an enormous amount of online research can draw you to the wrong conclusion. L’Amara’s location, bordering the thick forest that plunged down the valley, was spectacular and felt exclusive. The walk to the village centre was panoramic, flat, and thrilling; even more so when my younger daughter decided that the wheelbarrows-on-skis that you can pick up and deposit back anywhere in the village would be an ideal mode of transportation: one daughter thus transported the other throughout the trip. (This would not work in a resort thick with teenage British partygoers, who would inevitably shove each other down the run leading down the ledge in an alcohol-fuelled daze, with predictably alarming consequences. Fortunately, Avoriaz is very upper-middle-class family, or was when we were there.)

L’Amara itself is genuinely ski-in, ski- out (unlike some places that dub themselves so): unless you execute a perfect stop, you will find yourself skiing into the ski room, and conversely you can launch yourself out in the morning like a racer from a downhill starting gate. The ski school assembly area, where I left the family every morning, is above the main village. On day one we walked, and felt rather laden down with skis, poles and rucksacks (the altitude doesn’t help). Day two saw us ski down out of the hotel to the bottom of the (easy) blue run, with the aim of taking the chairlift that would deposit us just above the ski school area; we were just patting ourselves on the back for working out this ruse when we were confronted by a 20-minute queue of several hundred other people who had the same idea. (In the resort’s defence, we were travelling on the busiest week of the year and this was the only lift with any kind of significant queue.) On day three we found the solution that we used for the rest of the week with joy: a horse-drawn sleigh taxi, which whooshed us up to the ski school in a cloud of hooves, powder and sleigh bells (to the children’s delight) in three short minutes, for a mere €10. Worth the money for the ride alone.

The skiing in Avoriaz is extensive but not very tall: there are no ultra-high lifts of the type you get in Zermatt or Chamonix. Double- diamond and power-hound experts would run out of thrills quite soon, I think, but for a skier like me (and I am possibly the most common type of lifelong skier) the selection of interesting reds and proper but not kamikaze blacks was varied enough to hold the attention for a week without getting too much déjà vu.

Avoriaz is in the middle of an interlinked region called the Portes du Soleil. It is not as logically and broadly linked as the Trois Vallées of Courchevel, Meribel and Val Thorens: you can choose to ski to Champéry in Switzerland or, in the other direction, to Châtel in France. The Châtel trip was a ski journey of the type I enjoy, but it took a bit of navigation with the map. A lift up, then down to a collation of restaurants in the next valley called Ardent; up another lift and down a pleasant red to another, bigger collation of restaurants called Les Lindarets in a confusingly similar-looking valley; then up two lifts to a high-ish station called Chesery, from which it would be easy to take the wrong piste and end up back in Les Lindarets.

From Chesery there was a long view down a new valley all the way to Lake Geneva. The most interesting run of all, a steep, straight and mogulled red through the trees (really a black), led down to the pretty, traditional village of Châtel. It felt strangely satisfying to know that to drive back to Avoriaz from here would take up to two hours, around the mountains, and I was planning to have a hot chocolate (laced with a little something) and admire my last run, when I realised that I would need to turn straight round and return if I weren’t to miss the last in the fiddly series of lifts to get back home. I had to positively will the chairlifts to go faster and ski like an impatient Italian instructor eager to get down to his first date with a blonde Swedish student. I still had my heart in my mouth as I did my last racing turn (or what I hoped was a racing turn) to meet the final lift: it closed at 4.15pm, my watch said 4.17pm and… it was still moving. I shot through the gate without slowing down and was whisked back up to safety.

The rest of the family had just as enjoyable, if rather less eventful, times and after years of staying at luxury hotels it was a curious relief to be back into our extensive den at L’Amara. I enjoyed cooking (shopping in French supermarkets is always a pleasure) and opening wine purchased from a wine shop, not a marked-up hotel restaurant (it’s the principle, not the price). And after a day of ski school/private lessons, nobody felt much like talking to more strangers in the form of waiters and the like.

L’Amara has been designed with great attention to detail: we liked the porthole window by the floor-to-ceiling balcony door, the wraparound balcony itself, and the extremely well-equipped kitchen (complete with oyster shuckers and other signs of entitled bourgeoisie). On two nights we ventured across the snowy courtyard to Le Grand Café, part of the same complex, a new-but-trad restaurant serving steak on hot stones, various fondues, and high-class thin, misshapen pizzas of the best kind. Neither hotel nor chalet, and rather better than both, residences like L’Amara have a bright future in the Alps – the best type of American import.