Frieze LA Special: Introducing the next generation of filmmakers Ghetto Film School Roster brings together students and industry for a film competition screening and artist showcase of GFS alumni work, here at the Museum of the Moving Image, New York, 2017

More than a century has elapsed since Paramount Pictures was established in Hollywood in 1913. Since then, the studio lot has grown somewhat, from the original 26 acres to no fewer than 65 today. The scene itself has altered entirely, with thousands of movies and television shows coming to fruition on its hallowed grounds.

The studio’s iconic logo, on the other hand, remains almost entirely unchanged. The snow-topped mountain-scape studded with an arc of 22 stars is one of the protagonists in the rich movie history of Los Angeles. It’s woven into the very fabric of the place; the city has grown up around it, producing writers, artists, filmmakers and plenty more. So, what better place than Paramount Pictures Studios to house Frieze Los Angeles, when the international art fair opened its inaugural edition in the city in February 2019?

Non-profit organization Ghetto Film School has taken a similar trajectory to that of Frieze, in that it has opened its own LA outpost in recent times. GFS, as it is known, was first founded as a small after-school program in the South Bronx by former social worker Joe Hall some 20 years ago, with a view to introducing narrative filmmaking to youth programs in New York, particularly in low-income areas. “Ghetto Film School was founded on the premise of providing a robust, long-lasting platform for a new generation of storytellers, bridging the gap between in-class curriculum and hands-on experience in the entertainment industry,” explains Sharese Bullock-Bailey, its chief strategy and partnership officer. GFS has evolved exponentially, educating, developing and celebrating the next generation of great American storytellers. Since 2017 it has opened a third outpost, in London. 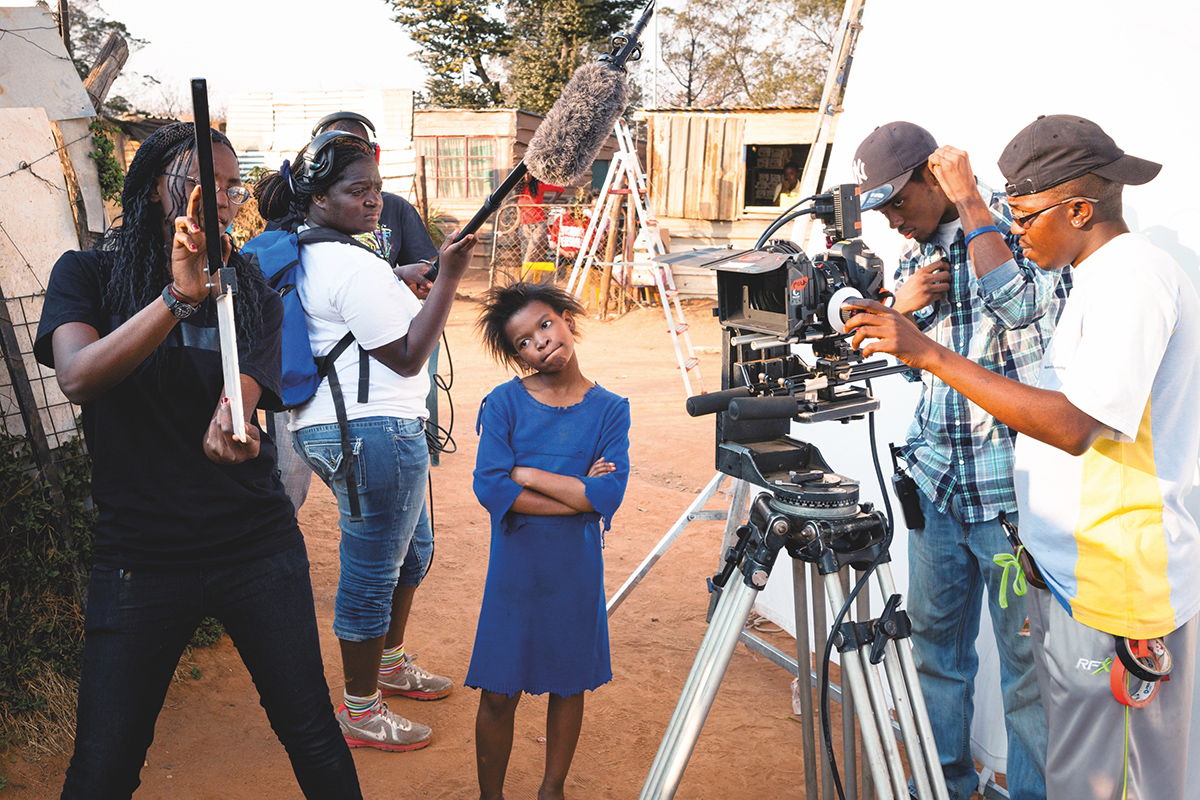 Founder and president of the GFS, Joe Hall

In view of the long history of the film industry in Los Angeles, the city provided a natural second home for the organization in 2017. The GFS has continued to forge a pathway into the film industry and beyond for its students ever since. “There is so much more to GFS outside of fostering behind-the-camera filmmakers,” Bullock-Bailey continues. “Our partners, who provide GFS students with immeasurable support, have been key at introducing them to other related avenues within the creative world. Outside of filmmaking, our graduates have gone on to become advertising producers, writers, studio executives, and set designers.”

Now, the next generation of Los Angeles’s filmmaking talent is set to receive a further boost. In the summer of 2019, Frieze and Deutsche Bank launched the inaugural edition of the Deutsche Bank Frieze Los Angeles Film Award, a new competition created in collaboration with Ghetto Film School. Ten aspiring and emerging filmmakers were offered a unique platform and an intensive four-month development program through which to produce their own short films, inspired by LA’s artistic, social and cultural landscape. The winning filmmaker, who receives an award of $10,000 at a ceremony in the Paramount Theatre during Frieze Los Angeles, is chosen by a panel of leading figures in contemporary art and entertainment. The award is showcased at the Deutsche Bank Wealth Management Lounge at the art fair, and its launch coincides with the 40th anniversary of the founding of the Deutsche Bank Collection of art.

Naturally, LA is a rich and fertile subject area for the students of the Fellows Program of the GFS to draw on. “The history of Los Angeles is built on the confluence of disparate visions for the city and its future, something that made the energy and community support at the first Frieze Los Angeles so palpable,” says Bettina Korek, the executive director of Frieze Los Angeles. “To be able to support these emerging local filmmakers in depicting our city’s current world, and showing how the medium of film has grown alongside it, is a privilege for us and our partners at the Paramount Theatre, Deutsche Bank and Ghetto Film School. I can’t wait to meet the Fellows and to see how they envision Los Angeles.” Thorsten Strauss, the Global Head of Art, Culture and Sports at Deutsche Bank, echoes her sentiment. “We are delighted to be working with Frieze and Ghetto Film School on this exciting new film award,” he says. “It’s a natural step in our ever-developing partnership with Frieze to start this project together and support emerging LA storytellers.” The Fellows, whose own cultural heritage reaches far and wide, have turned to their respective experiences of the city for their films, and the breadth of their concepts reflects the extraordinary diversity inherent to LA. They looked to the recent plague of fires (in the case of Nabeer Khan), the ubiquity of smartphones (for Nicole Thompson), and the wrenching unease of a displacement from, and subsequent return to, their home (for Silvia Lara). In each case, poignantly, the school’s Fellows share a profound and at times all-consuming desire to tell their story. They also all seem to share a hope that, in so doing, they might carve out a space in which others are able to make their own voices heard too.

GFS’s alumni, who are now scattered throughout the film industry and beyond, are testament to the program’s effectiveness. “Ghetto Film School is more than a non-profit mission statement,” says Luis Servera, a writer and director who graduated from the program in 2004. “It is family.” Servera has been part of the organization for all of his adult life, he says, proudly witnessing and contributing to its rapid growth. “It’s a bit surreal, but not surprising at all. GFS is destined to be a significant and influential catalyst in all things media.” How has Ghetto Film School seen such success? “They understand the power of storytelling and the power of the storyteller, no matter what their background is,” Servera continues. “They also realize that education and opportunities to those with limited access are essential to cultivate and nurture unseen talent.” What’s more, he continues, given the current climate in the industry, the work GFS is doing has the potential to reverberate for decades to come. “In a time when trending words such as ‘diversity’ and ‘inclusion’ seem to be at the forefront of keynotes and boardroom meetings, I find it curious that a small non-profit organization that started in the South Bronx is the solution to a problem that a massive industry is having.”

To see the short films that have been months in the making viewed and judged at a Frieze art fair – one of the core events in the art world – will, of course, be of no small moment for the young filmmakers. The Deutsche Bank Frieze Los Angeles Film Award marks the first milestone in each of these storytellers’ own narratives; where and when the next one will be, we will just have to wait and watch. ALIMA LEE
“After watching Sun Ra’s Space is the Place, I had a dream about a portal that looked like an empty doorway appearing in different parts of the city. The portal allowed black and indigenous people to escape to a planet where they could be safe. I revisited this concept in my short film, to explore a story line about how a girl comes across this portal and about why she intends to use it.” DANIELLE BOYD
“I was inspired by Shirin Neshat’s fearless ability to convey her feelings about being exiled from her home. I was also inspired by the colorful cultures in LA, and how they create the city’s identity. I was going to Africa for the first time and began feeling this sudden vacancy about my African American identity. I began to see more clearly how the miseducation of African Americans can affect us and the way we interpret our own history, and ourselves.” MICHELLE KIM
“The idea for my short emerged from this mental process of recognizing what moved me about LA and what felt significant. I reverted back to my childhood and the places I’ve grown up in, such as the car wash near my dad’s work, the liquor store in the strip mall. These sites are as sacred to me as they are banal to others, and the intention behind my short is based on visually sanctifying these places.” NABEER KHAN
“I knew that I had to make my film about the recent Los Angeles fires. I asked myself how these fires were starting. That question, combined with my interest in psychology, led me to the concept for my film. I wanted to explore the power of grief and its progression to rage. In this film, I seek to apply this idea to our relationship with nature and the ongoing destruction of our Earth.” NICOLE THOMPSON
“The concept for this film came to me while riding a train through the city and seeing so many people wrapped up in their phones. I decided to tell a story about when a young boy is forced to move to LA and stay at his grandparent’s house for the summer. He tries to convince his mom to not leave him there, but she has to travel for work. Left with no friends, Wi-Fi, or games he explores the house, discovers a magical book, and goes on an adventure traveling through different dimensions.” NOAH SELLMAN
“I was watching surreal YouTube videos and saw in one of them an animated dreamscape made of Coke products. I started to wonder if that was possible. When I moved to LA, I was struck by the branding that covers the city. There is barely a blank surface anywhere. It was a lot for someone from a small town. Watching Shirin Neshat’s shorts, I realized the dreams could be abstract. Then I knew I had an idea.” TIMOTHY OFFOR
“Spike Lee’s Jungle Fever was the first time I saw characters that I knew – not physically, but in character. I knew people just like them. I’ve dreamed of sharing my stories with the world ever since. The idea for my film originated during a debate with a friend about fear. We were discussing whether people are afraid of success or failure. Through that I developed a concept centered on dreams, fear and our willingness or unwillingness to overcome it.” TORYN SEABROOKS
“I love comedy and there is nothing funnier to me than an uncomfortable situation. When you’re trying to impress a person, you do things outside of your character and find yourself in the middle of cringeworthy moments. I wanted to tell this story to point out a darker truth I’ve grown to understand about idolatry within Hollywood, and what we’re willing to do to be accepted and seen by the people we admire.” SILVIA LARA
“I’ve always wanted to see my city, Whittier in LA, portrayed the way I feel it deserves to be seen. I had lived elsewhere before but didn’t realize just how special it was until I up and moved across the country to New York and then returned. It contrasted so much that it made me appreciate aspects of this quiet suburb on the edge of LA. And it’s not as quiet as it seems.” “The concept for my film came to me in a vision while visiting family in Korea earlier this year. My sister had recently encouraged me to ‘move in love, not in fear’ – a motto that set the tone for my entire year. I was listening to frequencies when an affirmation came over me, and thus, Cosmic Affirmation was born. I saw the film as a representation of how I’m overcoming fear in love.”

This article was originally published in the Spring Issue 2020.