Caroline Davies speaks to the London entrepreneur turning junk into art, and supporting his local community and numerous charities in the process

At the foot of the Trellick Tower, a Brutalist west London landmark tower block that has now become a part-ironic icon of the postwar era, lies a café, community centre and factory workshop. Venture inside the workshop and you will see an eclectic mixture of raw wooden benches and tables, repurposed conference chairs and unique art works including an elongated motorbike and copper piping chandelier.

The centre, called the Goldfinger Factory after the tower’s notorious architect, Ernö Goldfinger, transforms old furniture, bric a brac and other unwanted goods from charities and second hand stores. It then trains and employs local residents from socially disadvantaged groups to turn them into products that are sold in the shop, be that jewellery, art work, metal work or furniture. Artists and craftsmen with no other workspace use the factory’s workshop, located in the basement, giving part of the profits from sales to Goldfinger to carry on its activities, and teaching others the basic skills to get started themselves. 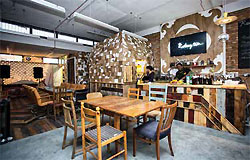 The factory was set up by Oliver Waddington-Ball, a young social entrepreneur with the boundless energy of a puppy. “There’s a phrase that I love,” he says. “Every pound you spend is a vote about how you want the world to be. I think that there is a way of making money that doesn’t mean anyone is screwed over. If one person loses then ultimately we all will.” Waddington-Ball first had the idea for the centre while working as a management consultant, advising companies on how to become more community friendly. He thought it was such a great idea that when the company didn’t take it on, he quit his job and started it himself. He persuaded the council to give him the space, which had lain empty for two years and began building up a business plan.

“The ethos of the factory was there from the beginning,” Waddington-Ball explains. “But the elements developed pretty organically. We found that a lovely lady living nearby does upholstery and needed a space. Someone else was an electrician, another made necklaces. It all just grew from working with the people we have.”

Every pound you spend is a vote about how you want the world to be. I think that there is a way of making money that doesn’t mean anyone is screwed over.”

Old, donated furniture are refurbished by trained hands and then put up for sale

Upcycling, the process of taking other people’s junk and turning them into a thing of beauty, has become the centre’s lifeblood. 1960s sideboards, modish armchairs and art deco inlaid tables are carefully restored and resold, vintage posters are given a new lease of life and old bicycles revived. The workshop has bigger projects too. After creating a bar for London Fashion Week made up entirely of OSB board, the team began reeling in commissions for pop-ups and more recently, outfitting homes for some high-profile clients. The successful musicians, actors, designers and authors from the area – a stone’s throw from chic Notting Hill and cool Queen’s Park – have taken to Goldfinger, buying into the unique stories and objects. It might be being charitable, but Waddington-Ball argues it isn’t just about accruing social brownie points.

“Obviously people like the story behind the objects they buy, but you can’t run a business by making someone feel guilty. They need to want what they are buying, otherwise the idea isn’t sustainable either.” Part of Goldfinger’s appeal is the atmosphere. The sales room may not be polished, but it is seductive, playing off a sense of discovery. The merchandise comes from across London, Waddington-Ball explains; charities send the factory photographs of new deliveries and Goldfinger take their pick, giving the charity the total they were asking for plus a third of any additional profit they make.

“We make charity sexy,” he says. “Selling pieces with a social story doesn’t need to be done somewhere with a charity shop feel.” Waddington-Ball is not only the force behind the factory, but he is also fast becoming a media lightning rod for the movement. In its short life, the factory has won some of the biggest funding awards and there is even talk of a television series.

“I want to spread the word,” he says. “The project is my baby, but it is taking on its own life now. I want to help people take this concept and use it across London and around the world.”