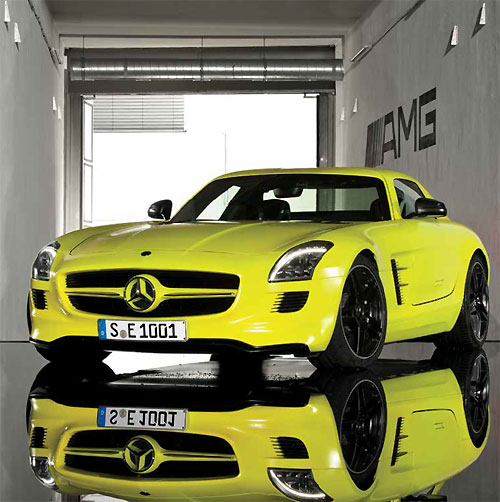 The head of future mobility at the world’s leading luxury car manufacturer predicts that the transformation of the auto market will come slowly, but surely. Herbert Kohler

As a company, as announced a few years ago, we are preparing the platforms of our cars to adapt to hybridisation [the use of electric and combustion engines in the same car]. We have done this with very good results in the [mid-sized] E-Class, but we have to admit that the market has changed a little since: hybrids are not the only way to dramatically reduce CO₂ emissions anymore. Look at the [big SUV] M-Class and you can see that a [diesel] combustion engine by itself can reach emission rates lower than 160g CO₂/km, which is outstandingly good. Nobody would have imagined that three or four years ago.

Still, the latest development is plug-in hybrid technology [where the electric engine is powered by batteries charged by mains electricity] with the S-Class, with preparations taking place to use the technology in other cars in the future. However, that depends on market acceptance, and nobody can realistically claim to predict that. The technology is fantastic and outstanding in terms of the technical challenge and solution; there is no question about that.

But the question is: how does this technology fit in and work from the market side, from the consumers’ side? And there is not only one market. There are different markets – China, the rest of Asia, Europe, the US and the rest of the world. It will come step by step and we are all feeling our way.

There are different opinions in the market. On the one side, you have the consumers who love such developments and are more passionate and committed to sustainability. Others do not care about that sort of thing, or not that extensively. And most people have no clear idea of the technology involved. In itself, this is not a disaster. But there is a tendency to associate with the word ‘hybrid’ – that this means the car has less emissions, that it is cheap but with as good a performance as before, and that there are no restrictions in the package. Most people would like to have all that without the additional costs – it’s a very attractive idea.

An important point to make is that [car manufacturers] cannot survive solely on the purchases of those who are really committed, on the consumers who say, “I really want to have that technology, and I will bear the extra costs because I know it is a positive thing to do”. I would say that they are less than five per cent of the market. You cannot build a business on less than five per cent.

There is a global move towards reducing emissions. China and Japan are in the same situation as Europe and the US. If you sum up the volumes of these countries, it adds up to more than 50 per cent of the world market, so it is clear we have to be guided by that. And then there’s the requirement for high technology and specification, from the Middle East, for instance, and such markets might not be as interested in the consumption side.

It is not possible to predict the future with certainty, as we all know. But we think there is strong movement behind plug-in hybrid motoring technology. I remember seven or eight years ago, when the first realistic ideas were being aired about plug-in hybrids. The initiative actually came from our Van department. Due to some requirements in the US, they asked if we were planning to do a plug-in hybrid. Our response at that time was, “Is this really necessary?”

My reason for recounting this is that there is a lot of development going on and there are a lot of new ideas, so it’s very difficult to say today what will happen in the next 10 years. I do think we will have more plug-ins in the future, because we’ve got good technical solutions without the compromise of additional costs or the lack of driveability. Nobody would want a luxury hybrid car with an electric mode that drives very slowly; nobody would pay for that. We are convinced that the time will come for [hydrogen] fuel cell and hybrid cars and that will bring us additional momentum, not being appropriate at the moment for the entire portfolio. But certainly [compact cars] will go in that direction for the next generation, and it will conquer other segments step by step. The technology is a given, we can do it, but it is also important not to swallow too much from the beginning. We need to do it step by step.

Our biggest challenge in all this is infrastructure [the network of electrical charging points for plug-in cars, which is mostly incomplete or non-existent around the world]. We will not get involved with it because it is not our core business and we are not willing to compete against energy suppliers – that would not make sense for us. We therefore have to rely on those who are more interested in it to grow in that direction. And sometimes there aren’t enough companies who wish to develop in that direction, so there is always an intensive struggle behind the curtain about that. This is one of the biggest challenges, but of course we also have a lot of technical challenges, as with any new technology. On the engineering side we have developed a very good cooperation with Nissan and Ford.

To showcase our technologies on this front is the S-Class [the new large saloon launched at the end of last year] for several reasons: it has autonomous and semi-autonomous driving modes, the most advanced safety features, and a plug-in hybrid solution. It shows everything we can do right now. « Previous article
Singapore Stories
Next Article »
Get Your Hedonism Hit