In an era of parallel entrepreneurs, who start several businesses at once, Andrew Brownsword is a serial entrepreneur, in two very different businesses. He is currently chairman and owner of Andrew Brownsword Hotels, which owns a group of luxury country house hotels (renowned for their cuisine) and chic city hotels, in the UK. But until 1994, he was known as the man behind the famous ‘Forever Friends’ greeting cards that took the market in the UK and across Europe by storm, reinventing the staid greeting card industry. He sold the company to Hallmark that year for a reported £195m, and bought The Bath Priory, a stately hotel just outside Britain’s most celebrated Roman city. Now he is chairman of the eponymous company that owns and runs a total of 13 hotels around the UK, including country jewels such as Gidleigh Park, with its two Michelin-starred restaurant; and boutique city hotels under the Abode brand. In a rare interview, he speaks to LUX Editor-in-Chief Darius Sanai about the luxury hotel market, and why Britain is best. LUX: Cuisine seems to be an important element of your hotels, although it never seems to be formal. Is it growing in importance?
Andrew Brownsword: Yes. We do believe in the (Michelin) star system, and Michelin is a good guide for people. Gidleigh Park is a two Michelin star hotel, for example. Bath Priory has always been a one Michelin star hotel, and it is a place for local celebration.

LUX: You are developing city centre hotels alongside the country hotels; why?
Andrew Brownsword: We’re acquisitive but we are essentially looking for the right locations. In the city centres, as in the country. Where we are, Chester, Manchester, Canterbury, Exeter, Glasgow, London, they’re all important to us, but you could add Cambridge and Oxford to that, also Birmingham. Purely by chance, most of our hotels are on Roman roads, or were around in Roman times, or they’re in Roman cities, so you could say most of the country was invaded by Romans but it’s remarkable that you can take a Roman journey through England and probably stay in 11 of our 13 hotels.

LUX: You don’t go for great lavish launch parties and big media trips, do you?
Andrew Brownsword: That’s just me I suppose. I think it’s a reflection of my personality as much as anything. We are self-funding and we don’t have big American companies or big Chinese companies behind us, so we do it quietly. But you’re right. We have a media presence obviously and we gain a reputation slowly by stealth.

LUX: This is obviously your second career – is that correct to say?
Andrew Brownsword: Yes, I’m a publisher really. A greetings card publisher, specifically.

LUX: You still feel that that’s what you do?
Andrew Brownsword: Yes, it’s on my passport.

LUX: What was the secret behind building up your greetings card company, from zero, as thoroughly as you did over the years?
Andrew Brownsword: I think it was just, well obviously hard work, we started from scratch. I think we were very innovative and creative. OPQ – originality, personality and quality – all we did was create different things. The market when I joined it was mostly imported from America. So we had American humour and American humour is very sanitised. We Brits, as you know, tend to use innuendo and take the mickey and use drink and drugs and sex and rock ‘n’ roll as things on which we base our humour. So I produced cards like that and eventually we produced very soft teddy bear cards, which also, well that was the big one. Forever Friends, is what I’m known for. We started creating imaginary worlds through these things and it struck me that anybody else would have produced it as a child’s range, but my feeling was that it could be very successful as an adult range. Which it was, worldwide.

Read next: The ‘New Epic’ of Bologna’s Wu Ming Collective

LUX: It sounds like you’re saying the creativity of the cards was as important as anything else, what was on them?
Andrew Brownsword: Yes. Words were important but they were very different words to a word or humour that had been used before. It was very much the English way of doing things. 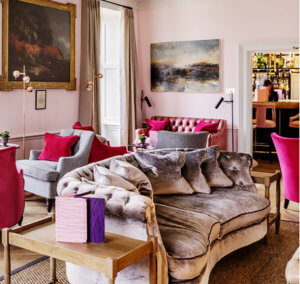 Interiors at The Slaughters Manor House in Gloucestershire

LUX: And after selling the cards business, you could have just done nothing or had one hotel..
Andrew Brownsword: Oh right, yes we sold well, it was a very successful business, it was an international business. I enjoyed the travelling. I did that for another four and a half years at Hallmark. And yes, we bought this hotel within months of selling the business, just on a whim because we suddenly had some money. And so, we bought the hotel, and that is how it started really. But we didn’t really think of having a chain of hotels, that wasn’t the intention. And still, the thing is to get quality, to get original sites, not necessarily to dampen the quality of what we do, the personality of what we do. We like to think our hotels each have a different personality. It’s quite an eclectic group of properties, and it’s interesting like that to me. Usually they feature our art and a lot of our interior ideas, and they don’t necessarily follow a formula. And at Gidleigh Park, we extended and refurbished the whole hotel shortly after purchasing the property, adding elements including stunning bathrooms and spa suites, to retain the property’s character but include some contemporary elements.

LUX: Is there an abiding philosophy? Obviously the hotels are individual, but is there something that customers will experience at all of them that is the same?
Andrew Brownsword: Yes, good service. Excellent service, I hope. And the quality, as I say, of the bed and the bathroom. Bathrooms are very important to us.

LUX: Hospitality is a tough industry.
Andrew Brownsword: It is a tough industry but we’ve been in it 25 years, so there’s a lot of new people on the block. It’s tough like this, where it’s not a formulaic thing. Premier Inn is not tough anymore, you can just open those all the time. But I don’t want to be in that business. The greeting card business was different, it was exciting. We all have exciting businesses, you publish magazines, that’s exciting. And that’s your career. My publishing is my career. What would you next step into if you didn’t do that? It’s a difficult question. So this suits us because we’re laying down a foundation. We’re not just hoteliers, we’re fairly large-scale farmers as well. I’ve been buying land for some years. Mainly arable land. So we mainly go growing crops. Potatoes, carrots and parsnips for the big supermarkets.

LUX: Is that a separate business that you own?
Andrew Brownsword: Very separate. It’s mainly owned, like all these businesses, in trusts for family future. I’m building a future for the family, hopefully, and setting it in such a way as most people like me do, that it will continue for a long, long time.

LUX: Your country hotels are luxury, and your city hotels are more four star level.
Andrew Brownsword: Yes. While Exeter and Canterbury are still primarily leisure, and actually Manchester and Chester are as well really, I think we suit the leisure market [in the cities] very well. We try to be a bit different, have a sense of location and personality. A bit creative. LUX: Gidleigh Park [with two Michelin stars] is renowned for its food. Since you took over [and installed new chef Michael Wignall] the cuisine has become lighter. Is that a trend with fine dining?
Andrew Brownsword: Yes. I think food is becoming simpler, more digestible and more interesting, in so many ways. Gidleigh Park now has a much lighter touch.

Read next: The world’s most exclusive polo tournament in Gstaad

LUX: As a greeting-card publisher turned hotelier, was there ever any impetus to run a hotel when you were young?
Andrew Brownsword: Yes, my original life plan was to manage a hotel. I had a job in a hotel as a waiter, when I was 15,16,17, at a hotel in Folkestone but on my first year at Brighton polytechnic I came back and immediately got chicken pox, so they didn’t want me in the hotel, quite rightly, so I lay on my back for about 2/3 weeks and the chicken pox went and I hadn’t got a job. And my mother sent me down to the labour exchange, as it was called in those days, to get a job because my mother was very much a driving force. And I had a very ambitious mother, for me. So she sent me down to the labour exchange and I got a job driving a van for a packaging manufacturer. He he did produce a few greetings card on the edge of the packaging sheets. He printed these things on the edge.

My idea was simply not to be a printer because I hadn’t any money, so I couldn’t buy the machinery. But actually to hire someone like him to print them. Those days, in the Seventies, if you were a greeting card publisher, you were also a printer. That’s where all the cost was.

So I started, and I don’t think entrepreneurs are born entrepreneurs, I think they are created out of naivety. We start with these wonderful ambitions and dreams and then we have to find the first hurdle comes and then the second hurdle is bigger. For ten years I was probably insolvent. I owed the bank more money than I had, but I always succeeded, never went bankrupt or anything. But for a few thousand pounds I was probably insolvent for ten years, until I found the artists and the creativity in me, and the creativity came from seeing a market place full of American greeting cards. And realising that we were funnier than these greeting cards. You and I could crack a funnier joke than most of these cards. The Americans take life seriously and they take themselves seriously and they can’t laugh at themselves really. I thought that was the case for Germans as well but actually we did very well in Germany in terms of British humour, until I found out that the German translations of our humour were very, very on the edge. Risqué is the word.

LUX: Is there a common factor in success in your two careers?
Andrew Brownsword: I think so. It’s trying to do things in a different way and trying to be original and putting some of your personality into the businesses you run, and certainly the quality matters. And you have to enjoy it. You’ve got to be having fun.

Behind the wheel of the world’s most powerful supercars: part three Back to school with Van Cleef & Arpels

« Previous article
Stapleford Park: The ultimate country getaway
Next Article »
Hotel of the Month: ME Ibiza