Stapleford Park is a historic manor house hotel set in stunning parkland two hours north of London. But it is much more than that: its clever structure means that it caters to families without being overwhelmed by them, and offers fine dining, indoor swimming, a spa, falconry – and it even has its own crèche and registered babysitters, as Serena Hamilton discovered. The Leicestershire countryside is beautiful and sometimes overlooked – for Londoners, it’s a county you drive through en route to the more famous sights of Yorkshire or Scotland. And unfairly so, I mused, as our car made our way through the stunning 500 acres of parkland surrounding Stapleford Park. Green, flush with mature trees, rolling, and entirely free of development, it seemed a place you could lose yourself in.

Our particular challenge was the children. We have young children, and as many parents know, they don’t always mix well with luxury hotels. Particularly the kind of place where others might go for romantic breaks; and every parent knows the drawback of checking into a stunning getaway with their children, only to find themselves doing exactly what they would have done back home.

We needn’t have worried. Of course, we wanted to spend our weekend with the children, primarily, and it was glorious to see their faces as we tried out the falconry (they were particularly taken by the eagles and owls). Stapleford’s grounds seem endless, and we immersed ourselves in them. The Midlands of England are privileged with many things, but a Mediterranean climate is not one of them, so it was fabulous to have a big, and uncrowded, indoor pool to swim and play in (and snooze by) on a rainy day. Some of the rooms are created to specific designs, like Osborne & Little or Nina Campbell; our room was relaxing as they come, with views over the trees, and a big marble bathroom. 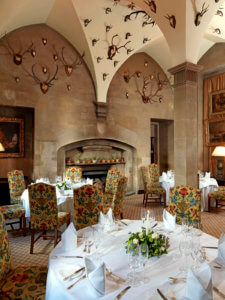 All of that would have amounted to a fun family weekend, but where Stapleford came into its own was with its Ofsted-registered crèche and in-house, staff babysitters. Many hotels take no responsibility for childcare, handing you the number of a local agency with a disclaimer. On both nights, were able to have an excellent dinner à deux in the two-AA-rosette restaurant – which is big on local sourcing, and tasted like eating the countryside – while the hotel’s own babysitter took care of the kids in the room. Chef Luke Holland told us he prides himself on using only the local producers and foraging for edible ingredients around the estate. The sweetcorn risotto with wild garlic, wood blewits and slow cooked onion was so good that I had it both nights. Another highlight was the duck egg “62oc” with spring peas, broad beans, coppa and pea sorbet. Next to the pool is the spa, and the next day the children spent a couple of hours in the crèche – a real crèche, not a token kids’ club – while we had extremely invigorating spa treatments.

It is a rare country house hotel that would be just as idyllic for visitors with and without children – and Stapleford Park is just that.