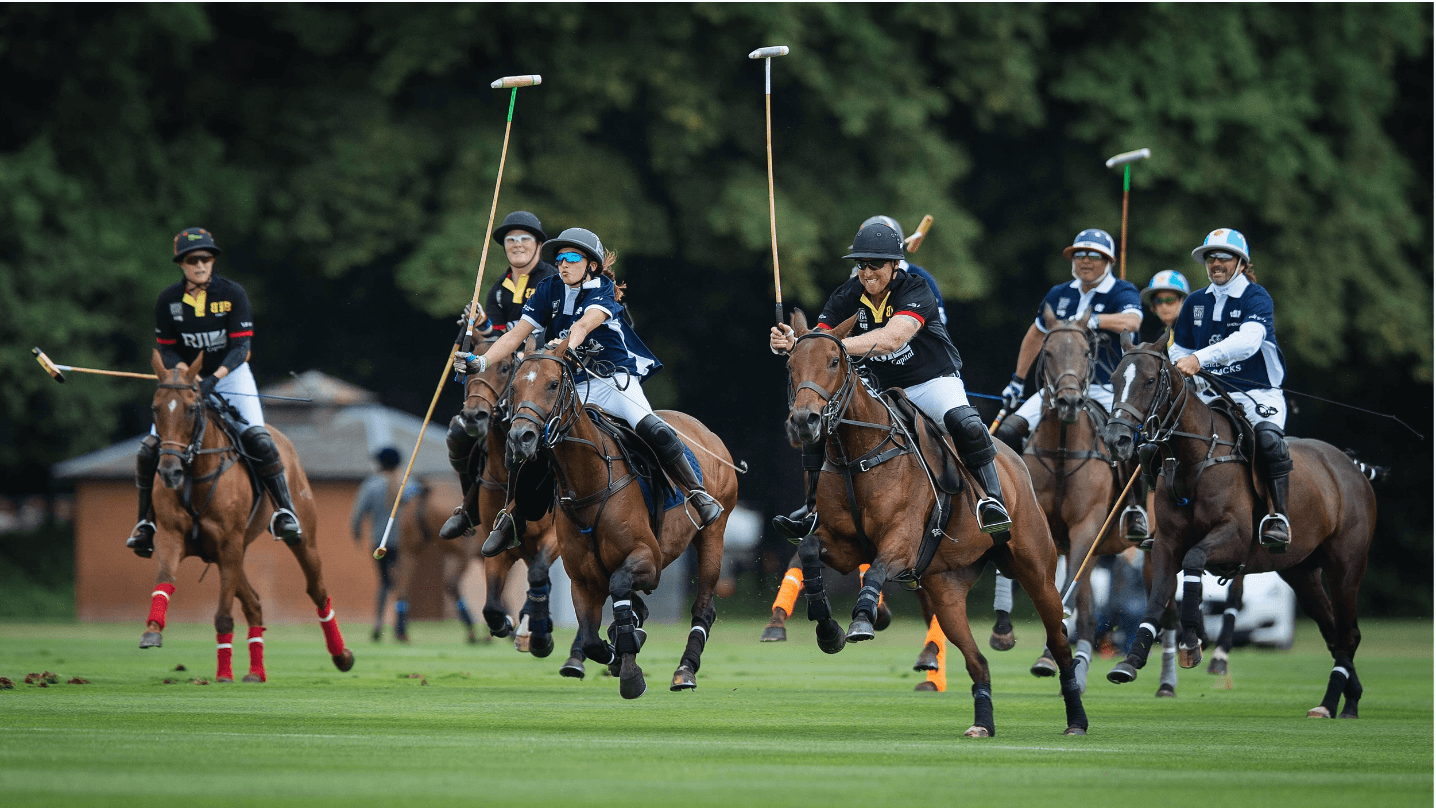 British Polo Day’s unique approach to an international, invitation only, global polo platform has cemented the brand as one of the most sought after events on the social calendar. Partnering with the likes of Bentley, VistaJet and Chelsea Barracks, the events see some of the world’s most interesting individuals gather to celebrate polo in dreamy locations around the world. LUX Editor Kitty Harris speaks with Co-Founder and Director Tom Hudson about the inception of the idea and the history of horsemanship LUX: How did the inception of British Polo Day come about?
Tom Hudson: In 2008 I moved to Dubai along with a whole wave of friends from school, university and the Army, who all seemed to be moving out at the same time. I began playing polo at a brand-new club that had been built in the desert and became friends with the Habtoor family who were the local polo patrons. At the time not, many people watched the sport. I grew up in Windsor, next to Guards Polo Club which often draws thousands of people to watch, and pitched the idea for hosting an exhibition, where we would bring out the best British players to ride against the best Gulf players. Our first event was in February 2009 and we expected about 200 people. More than a thousand turned up, and British Polo Day was born. Since then, we have held 65 British Polo Days in more than 15 countries across all 5 continents and have raised more than $2m for good causes in the process.

LUX: Why was it important for British markets to have access to Dubai?
Tom Hudson: I think in a post-Brexit world, Britain needs to look to its friends further afield and Dubai is a natural gateway to the East with many British Expats living there. It has a familiarity about it, especially with the financial freezone having a legal system based on English law. Above all, the Emiratis are incredibly hospitable and like things that are quintessentially British.

LUX: What is it about polo that captures its audiences and players?
Tom Hudson: Polo is the world’s oldest sport, and there is a famous saying said to have originated in ancient Persia that “the game of kings will always be the king of games”. I think the history and heritage resonates everywhere it is played, whether that is India with the Maharajas or China, harking back to the Tang dynasty. As the only mode of transport for more than 2000 years, horsemanship is celebrated in almost every culture, and polo allows one to demonstrate strength, speed and stamina. The Ralph Lauren adverts have not done the game any harm either! LUX: British Polo Day has been described as an international members club, with the intention of building lasting relationships. How does this work as a business model?
Tom Hudson: British Polo Day was founded with the aim of bringing people together and forging friendships with our hosts in their home countries. By working with mutually complimentary but non-competing companies, partners can club together and co-invest in the platform that would otherwise cost them much more to do themselves. There is also the network effect around their clients. If one partner invites 10 clients, but 10 partners each invite 10 clients, then there are 100 potential clients for them all to meet and introduce to each other.

Read more: Geoffrey Kent on how to pack for an adventure

LUX: How do you go about selecting the right partners for the brand?
Tom Hudson: We are meticulous in only bringing in companies and, more importantly, people who are a good fit and who buy into our long-term vision. We have 2000 years of combined heritage across our partner base and we check with our existing partners before bringing a new company in.

LUX: What are some of the challenges you face organising international British Polo Day events?
Tom Hudson: People often talk about the founding or inception of an idea as if it is the hard part, however I think it’s turning the vision into a reality that is the biggest challenge, and riding out the bumps on the way. It was one thing to throw one event in Dubai in 2009, but quite another to deliver the events globally to the same standard for 10 years straight. For that I have to thank the British Polo Day team and my great friend and partner Ben Vestey. Ben played in the first ever British Polo Day in India and immediately saw the potential, leaving his job soon after and investing in the growth of British Polo Day. LUX: Much of your advertising is by word of mouth from your guests. Supporters include key figures in government, aristocracy, diplomats and arty types too. How would you describe the ultimate British Polo Day guest?
Tom Hudson: We look for those who are not only interesting, but also interested in others. From entrepreneurs like Sir Richard Branson and Elon Musk, to Arab Sheikhs, American influencers with millions of followers, through to Indian industrialists and Chinese couture designers, we’ve hosted them all. We pride ourselves in the magic and eclectic mix and are always striving to introduce people who we think will get along and find that chemistry. We’ve even had our first wedding and baby from a couple who met at a British Polo Day!

LUX: British Polo Day now travels to 8 destinations a year, what does the future hold?
Tom Hudson: We used to think that the more events and countries the merrier, with many polo clubs inviting us to host British Polo Days, but recently we have decided to stick to our core countries and concentrate on quality over quantity. Ben and I both have young families, and we would love our children to witness some of the amazing experiences that we have been lucky enough to enjoy through British Polo Day.

LUX: Where do you go to escape?
Tom Hudson: I’m fortunate that Jess, my wife, works with some of the best luxury holiday destinations in the world, so recent holidays have been on Velaa Private Island and Royal Mansour in Marrakech.

The next British Polo Day event will be held in China on 16th September 2018. For more information visit: britishpoloday.com « Previous article
Hotel of the month: Chewton Glen, Hampshire, UK
Next Article »
Geoffrey Kent: What I never travel without