Artist Peter Schuyff on the spirituality of painting nothing Peter Schuyff was a central figure in New York’s East Village scene in the 1980s, where he worked for a period at Studio 54, sitting for Andy Warhol and living in the historic Chelsea Hotel. Over the years, his artistic language has evolved from loose figuration to abstraction. Following the opening and subsequent suspension of two consecutive exhibitions at White Cube, Masons’ Yard and Carl Kostyál, London, Nick Hackworth speaks to the artist about lockdown, nothingness and Sylvester Stallone

LUX: So, how’s the apocalypse going for you?
Peter Schuyff: Well, I’ve run out of pencil lead unfortunately. I’ve started work on this very obsessive project and I was using a rather specialised pencil and half-way through I ran out of lead and I can’t think of a single place where I might get more…. I’ve been working on these samplers. It’s what I often do when I get frustrated, or right after a big show. I sit down and make these very obsessive renderings that are like a smorgasbord or a sampler of all my oeuvres.

LUX: Like the one you had in your show at Carl Kostyál Gallery a few years back?
Peter Schuyff: Yes, that one was called Plato Combinato. That’s a really good example. At the moment, I’m making a portrait of the show that I have at the White Cube. LUX: Why do you think you tend to do these sampler works after completing shows? Are you visually cataloguing or processing the shows?
Peter Schuyff: Yeah, I’m visually cataloguing the show I guess, just so I can see it clearly. I’ve always had a fascination with pictures of pictures, whether it’s in 17th Dutch paintings where you often see paintings hanging in the background or in those preposterous 18th century paintings of salons. I’ve often commissioned friend to make drawings or paintings of my drawings and paintings. They help me see my own work a little bit clearer.

LUX: I managed to catch your show just before it got locked-down along with the rest of the world. It’s stunning, so congratulations, but commiserations on the timing. How are you feeling about it all?
Peter Schuyff: It hurts, of course. I’ve been looking forward to this for a couple of years now and I guess I was expecting the show to be a liminal moment for me, y’know? With a before and after. Somehow, that before and after thing has been taken away a bit. But if it would have been a show of new paintings, I think I would have been really destroyed.

LUX: Because of all the labour you would have invested in the work?
Peter Schuyff: No, no, it’s not the invested labour, it’s about momentum. When I show new paintings, they’re paintings I want to show now, not later. Do you know what I mean? Whereas these painting were shown last year (in a touring show at Le Consortium, Dijon and Fri Art, Fribourg) and many people know them already, so it doesn’t feel quite as much of a loss.

LUX: What’s it like walking into a show of your works from three to almost four decades ago? Do you still feel connected to the paintings?
Peter Schuyff: I’m really impressed by them! I’m impressed that I was young and handsome [laughs] and so I could afford not to give a shit, which is a great recipe for making paintings! Today, I’m old and cynical so I have another way of not giving a shit, which enables me to make really clean and clear paintings and I love that. There was a lot of time in between where I couldn’t do that. When I see these works I always surprised at how big they are and how much balls I had. My God! Especially the paintings at White Cube, the audacity I had. LUX: We’ve talked over the years and you’ve always said your paintings are ‘about nothing’. Is that how you thought about the paintings when you were making them back in the 80s?
Peter Schuyff: Yeah, I did. A teacher of mine in Vancouver, Michael Morris, used to talk about the problem of nothing. I guess it was almost a spiritual principle of work not needing to be about something. When I got to New York, that came more naturally, but I always talked about my work in this way and it’s always been an issue. When I showed in Germany in the mid-80s, I remember a lot of the German artists being mystified by how little was there was going in the work.

LUX: In your other show at Carl Kostyál, you’re showing several of your 80s watercolour works, which I love. I’ve been trying to get my head around how you achieve the precise gradations of colour and shade in them?
Peter Schuyff: So, I’ll answer it this way. That great big painting downstairs at White Cube, the one with the prism of colours, it’s a ten-foot-square canvas, and it’s broken up into one-inch units, and I made that with a four-inch brush with a round bristle. So knowing that, you should be able to figure out how I made them… It’s the same with those watercolours. Those watercolours were broken up into little squares that are about a half a centimetre squared or something? There’s no way I’m going to pay attention to each of those little squares. LUX: Well, it’s a very effective trick then, because the apparent precision is amazing in those works.
Peter Schuyff: And just like a good magic show, it’s all about engineering. 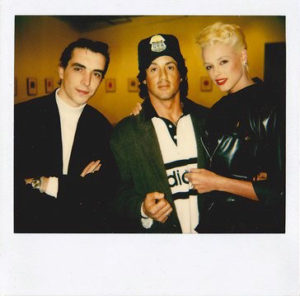 LUX: In the book accompanying ‘Works on Paper’, there’s picture of you with Brigitte Nielsen and Sylvester Stallone. I gather Stallone is a bit of a collector?
Peter Schuyff: Oh yeah, a very sensitive collector. One time that I remember particularly was when Sylvester came to my house. I had all these Louis M Eilshemius paintings on the wall and Sylvester walks in and – I can’t do a Stallone impression, I wish I could – says, ‘Oh my God, you have all these Louis M Eilshemius paintings!’ He knew exactly who Louis M Eilshemius was despite him being a totally obscure American cultural presence in the 1910s and 1920s. I was so impressed. Sylvester was so well read about American art from the early 20th century, The Ashcan School period and so on. He was so smart. Another time we met in Los Angeles and he gave me a tour of the post-production set of Rocky and I met Apollo Creed, which is the guy he fights at the end of the film.

LUX: Sounds like an interesting time.
Peter Schuyff: Well, it was different. When I first showed up in New York there was this idea of the underground. It was about glamour that was absolutely free. All you had to be was some kind of fabulous. It didn’t matter what kind.

Peter Schuyff’s exhibitions ‘Works on Paper’ at Carl Kostyál Gallery, London and ‘In Focus’ at White Cube, Mason’s Yard, London both opened in March 2020 and are currently suspended due to Covid-19. For further updates visit: kostyal.com; whitecube.com