Model of the month: Alicia Rountree THIS MONTH: Mauritian-born Alicia Rountree leads a hectic life doubling as both supermodel and restaurateur. Since signing to Models 1 at the age of 17, Rountree has travelled extensively shooting campaigns for the likes of L’Oréal, Victoria’s Secret and Ralph Lauren. In 2010 whilst living in New York she opened ‘The Tartinery’ with close friend Nicolas Dutko. Situated in the Nolita district, the restaurant specialises in open faced sandwiches and tartines, inspired by Alicia’s love of french cuisine and the simplicity of fresh ingredients.

Sydney Lima: How did you first get into modelling?
Alicia Rountree: I was scouted a few times as a teenager when I was in London spending summer holidays, but I was too young to get into the business. I was then scouted at 17 at a Vogue event and I was more then ready to start modelling by then.

SL: What’s been your favourite shoot to date?
AR: It was a shoot for Italian Elle, shot in Mauritius. The team loved my family so much that they added them into the story. We all have wonderful memories from that shoot.

SL:What do you love about modelling?
AR: Travel, discovering new places and cultures, meeting new people and making friends along the way. I obviously love clothes and fashion
in general so I love the dressing up part too!

SL: What do you hate about modelling?
AR: It can be very lonely sometimes. Always packing and unpacking your suitcase. It is sometimes quite hard on your body shooting for long hours and travelling non stop.

SL: What inspired you to open your own restaurant?
AR: A restaurant like Tartinery did not exist in New York. We found that there was a place missing where you can meet up and have fresh local food, easy to share in an industrial-chic environment with nice music.

Read next: Copenhagen’s youth on why their city is the greatest

Sydney Lima: Where did you love of French cuisine come from?
Alicia Rountree: I went to Paris a lot as a child and have so many memories eating at French cafes. French people have a love of food that is different to anywhere else. Also they don’t care about eating carbs, they love a good fresh baguette or croissant!

SL: Did you get involved with much of the interior design and aesthetic of the restaurant?
AR: Yes it was important to have the place be charming and sophisticated. I remember even painting the chairs myself to get them done the right way. 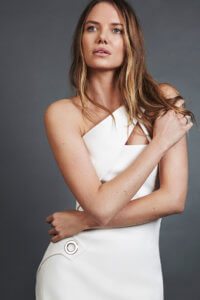 SL: What inspires you on a daily basis?
AR: Being grateful. I know that I am very lucky to have the life I do and I never take anything for granted. I love my family and friends and make sure that they know it.

SL: How do you rate your cooking skills?
AR: I am a good cook. I get it from my mum. But I don’t really have the time to cook much. Only in Mauritius with all the family, then it’s so much fun to cook for everyone.

SL: What would be your signature dish?
AR: Avocado toast! Can you call it a dish? I do many delicious variations.

SL: What plans do you have for 2017?
AR: Learn more and share my knowledge with whoever wants to listen.