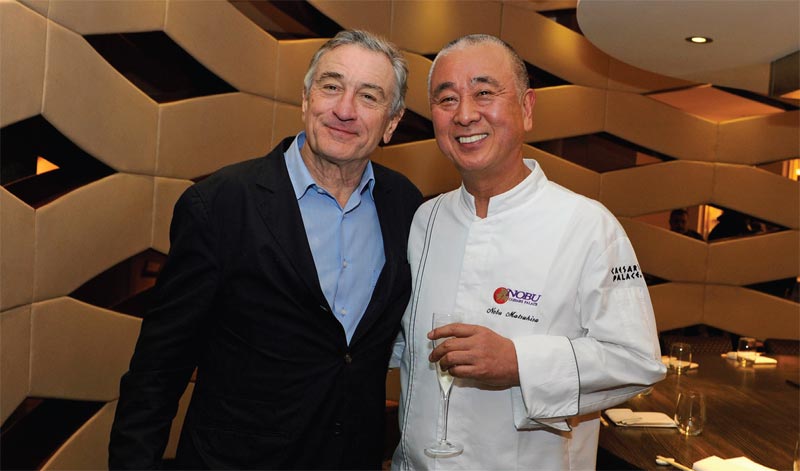 It is a quarter of a century since Nobu Matsuhisa first teamed up with Robert De Niro to open a restaurant in LA that would change the way the A-list eats. DARIUS SANAI sat down with Nobu recently to talk taste, celebrity, and hotels

Everyone remembers their first visit to a Nobu. Mine was quite a few years back, in London, accompanied by a number of hard-worn journalists determined not to be star-struck either by the other guests or the food. After chatting to Queen Rania of Jordan, exchanging hellos with Uma Thurman and tasting the original black cod that made Nobu famous around the world, it was hard to remain skeptical.

Nobu himself is an intense, modest man, with huge presence but little noise. As his empire, still owned in partnership with De Niro, has expanded, to 22 restaurants around the world and now hotels in Las Vegas and Riyadh, with others coming soon in London and Bahrain, he is no longer spending his days in the kitchen but remains very involved with the creation of the dishes. Nobu-style food, while Japanese influenced, with hints of South America, is as distinctive and original as the highoctane, dazzling service and venues.

As a brand, Nobu envelops a highly contemporary concept of healthy, expensive, minimalist dining and socialising that is the polar opposite of the traditional Escoffier-influenced fine dining experience; it speaks of the casual yet highly stylised living experience of today’s image-conscious high net worths. Which is why celebrities from Kate Moss, Elton John and Brad Pitt to Naomi Campbell, Tom Cruise and various royals remain regulars. And every slick Asian-fusion restaurant in the world, from Zuma to Sushisamba Las Vegas, owes a debt to Nobu, the man, and his restaurants.

What are the most exciting things you are doing at the moment?

You know, I’m a chef, and I now travel every three or four days, seeing the different restaurants in different cities. I see the chefs, I see the managers, and then I talk to the chefs about creating something; about creating new dishes; about cooking. That’s exciting. It used to be that I was much more involved with training, but now we have four teams around the world – two in America, one for the European restaurants, one for the Asian restaurants, and we’re opening the Nobu hotels, so everyone’s excited about getting involved in the new projects.

When you started out did you ever think it would come to this?

No, no, no. My first restaurant opened in 1987, I was so happy and it was only a 38-seat restaurant. I didn’t think at all about the future, I just like to try my best day to day. And then here I am, opening restaurants all over the world… 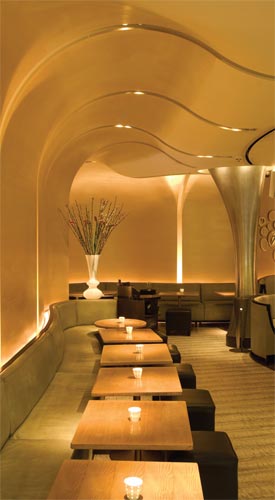 Nobu Berkeley ST – Located in the heart of Mayfair, the lounge is located within the twostorey restaurant

Do you still work in the kitchen?

The first time I create something I have to show to them how to do it, so then I teach one chef, so this chef can teach all over the restaurant. Recently I went to Dubai, we created one dish, so this Dubai chef then taught this recipe [to his colleagues]. Then we went to Moscow, and did the same, and London. These days I teach them how to do things. I don’t stay in the kitchen all day any more.

It’s good because I appreciate it when people understand my food and also when they appreciate quality. When I first opened in LA, we were using frozen fish: yellowtail, eel, shrimp, mackerel, a lot of frozen produce. Now it’s all fresh produce, and that means I know that people now appreciate what fresh fish tastes like.

But you have a lot of competition now.

Restaurants come and go – how have yours stayed up there for so long?

How important is everything apart from the food? Service, ambience, décor?

It’s all about food and service, because the restaurant business is hospitality, people are spending money not just for the food, they have to enjoy the experience from the beginning to the end.

Number three for me.

Is your celebrity clientele important?

I’m very happy celebrities come, and regular customers also. Regular customers come and spot celebrities. But celebrity people are very sensitive about what they eat. People like Victoria Beckham and David Beckham come because they trust our food, which is very important.

How much has the food changed over the last 25 years?

I create sushi and fish dishes. It used to be that people were wary of fish; they thought the smell was off-putting. But fresh fish does not have any smell, or “fishy” taste, it has clean flavours. More people have understood this over the past 25 years. And a lot of people like fish now because it is healthy.

Does cooking come from the heart?

Yes. If I see a beautiful girl I want to approach her with my cooking. To show off what I can do.

Everything in Nobu has a Japanese background. Best example: the burger uses bread, but you know in Japanese cooking we never use bread. So we made a tofu bun, very good and very healthy. So this is like a Nobu style: I like to keep the Japanese concept of food. It would be easy to make pastas or sausage or ham, but the Nobu restaurants have a background in Japanese cooking.

Do you overrule your chefs in your restaurants?

Yes. Yesterday a chef showed us one of his new dishes. It was with turbot, which has a very nice white meat. He did a smoke, but too strong a smoke so you couldn’t taste any other flavours. So the chef asked how was it, and I said, “I didn’t like it, please remove it.” Sometimes, when you work too hard on something it doesn’t work. My way is simple, but with heart and detail.

How important is being on TV to a chef like you?

To do interviews about the cuisine, yes, because a lot of people watch it. You are starting hotels now. Tell me about that.

How important is the Nobu food element in the hotels?

In the Las Vegas hotel, you can have 24- hour room service of anything from the Nobu menu. Anytime you like. 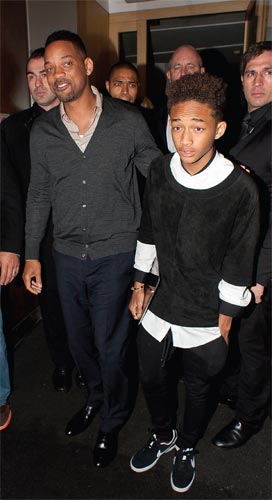 Will Smith and son, Jaden The restaurant regularly attracts an A-list clientele, including celebrities such as Smith

What irks you when travelling?

When you go to a restaurant you are excited about, and the food is good, but the service is so slow, or they don’t pay much attention, it is so disappointing. Training staff for watching tables is so important.

What is your service philosophy – Nobu is not formal like traditional fine dining restaurants?

We are not looking to be a Michelin-star restaurant. I like to show energy, and also, not too much service. Too much service means that the customer gets tired. But if the customer is looking for something then the waiter is immediately there, then that is my perfect service.

Any new types of dish you are creating?

I like to stick to my Japanese concept. We don’t use creams, we don’t use butter much, and no cheese. Food has fashions, but I want to keep my concept, my ingredients.

What do you think of all the imitators?

I opened in 1987 and a lot of chefs said it’s not a Japanese restaurant. Now after 27 years, there are a lot of restaurants with a ‘Nobu influence’, with the black cod; a lot of people have copied us. Some restaurants even call it “Nobu-style black cod”, and we complain. People want to use our name, and I don’t like this. There is a cookbook, they can copy my food, but no one can copy my heart. Nobu is cooking with a heart. Now black cod is all over the world, the price of black cod used to be 70 cents per pound, now it is US$8 dollars per pound, the price has gone up but I support this: Japanese produce is growing in popularity all over the world, which is very good.

I have created soya salt. Try some.

Wow. It’s… like nothing else. Does it come from Japan?

No. I created it a couple of years ago. I’ll be selling it.

How do you define your food? What would you call it? Japanese? Japanese-influenced?

Where do you experiment to make this? Do you have a laboratory?

We talk to customers and they give me homework to do! 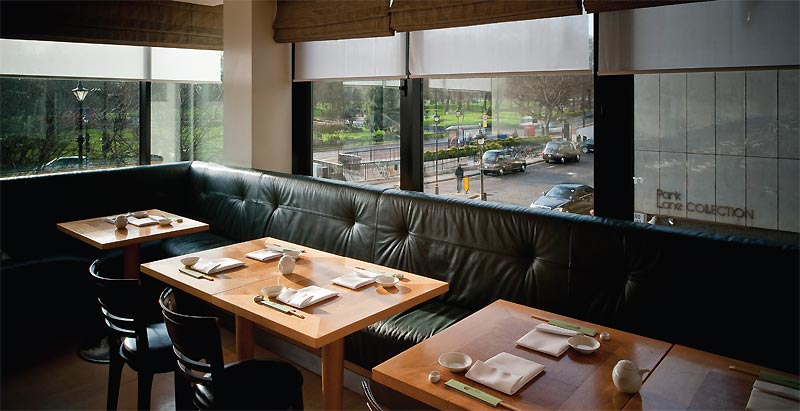 Umami is very important to you?

In everything? Are there different types of umami?

Japanese umami has no calories, so that is why Japanese food is very healthy. So the basics are umami, then you work out how much salt, how much sugar, how much sour, all the different combinations, then comes the perfect balance and it automatically tastes good.

Is umami one taste, like salt? Or is it a range of flavours?

Soya sauce has umami because of the glutamate, miso too. It is a balance, it’s about deliciousness. It is a balance in the whole flavour. Spain has ham, Italy has cheese and tomatoes, China has dry seafood, you know, each country has its own umami. Japanese umami has no calories. You know the mother’s milk for the baby after it is born, this is also umami. All over the world, the kids have the taste of umami, it is the mother’s milk, no salt, no sour, no bitter, no sweet, just umami.