For Winter 2013, Elbaz introduced the spirit of couture 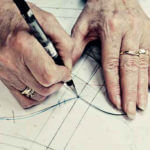 At Lanvin, drafters and pattern cutters work their magic Elbaz still sketches his ideas and pens down notes 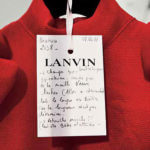 Every design has its own story to tell Every ruche, fold and drape is drafted on real women

Lanvin is a great French fashion house that no longer (since 1992) creates Haute Couture, the most exclusive and bespoke of all the collections. However, some might say the artistry of its revered creative director, Alber Elbaz, makes couture irrelevant. When LUX asked Elbaz for his thoughts on the relationship between the house’s couture past and its high-end readyto- wear present, he gave us these measured — and exclusive — thoughts:

“For the latest collection [Winter 2013], I wanted to take the time for once and to treat it like real luxury. I wanted to go back to the preciousness, to the emotion, to the know-how of the French atelier.

“An atelier for me is mostly a laboratory with amazing people that in a few years will be retired. So we might as well enjoy it while it’s there. When I arrived at Lanvin, I realised that the ateliers were the same as the time of Haute Couture at Lanvin. Today, there are still people who have worked at Lanvin for the Haute Couture. This savoir-faire is extremely important. And I have a very close relationship with the people at the atelier. I don’t work with a head of seamstress like the other couture houses usually do. Elbaz works closely with the pattern makers to discuss every decision Elbaz observes the fit of a design

“I found that it was better to speak directly to the ‘modéliste’ (pattern maker). So I am like the head of seamstress. I work with them every day, speaking of the problems they have on a dress, doing fittings three, four or five times on a model. And the studio is just at the top floor of the atelier, so it is very easy to meet each other. I love these amazing people who help me to realise my dreams day after day.”