Kate Moss zooming along the Cotswolds country lanes in her vintage Porsche 911S, Jodie Kidd finishing the Mille Miglia in a Jaguar XK120, Kendall Jenner cruising around Hollywood in a 1965 Mustang… When it comes to classic cars, who says boys have all the fun? Women are getting in on the action more than ever – the percentage of women buying classic cars is rising year on year – but this isn’t just about something that looks good on the driveway: this is about the art of driving, the love of the open road, the thrill of the race. And for these women, there’s no greater expression of this art than the Rallye des Princesses Richard Mille, which this year celebrates its 20th edition.

Spanning 1,000 miles from Paris to the south of France, and spread over five days, the female-only Rallye des Princesses Richard Mille has become synonymous with excellence in the sport. “It is a mix of precision, prestige and conviviality,” says Viviane Zaniroli, who founded the Rallye in 1999. Don’t let the name fool you; this is no jolly jaunt through pretty scenery. The Rallye is a challenging and often technical race, and counts the likes of Caroline Bugatti and the daughters of six-times Le Mans champion Jacky Ickx, Vanina and Larissa, among its alumni. “The challenge is to drive a classic car, which does not have all the comforts like power steering that we are used to these days, on small, sinuous roads, without getting lost,” Zaniroli explains. Competitors are tasked with following complex navigation instructions, only provided shortly before setting off in the morning, in order to complete a set daily distance, all the while maintaining strict average speed times – simply flooring it isn’t an option. “And even though it takes place in June, the weather can be bad,” Zaniroli adds. Indeed – last year’s race was beset with storms, leading to anecdotes of coaxing Ferraris through floods, nudging Bentleys around hairpin bends in torrential rain, and steering Lamborghinis past landslides. 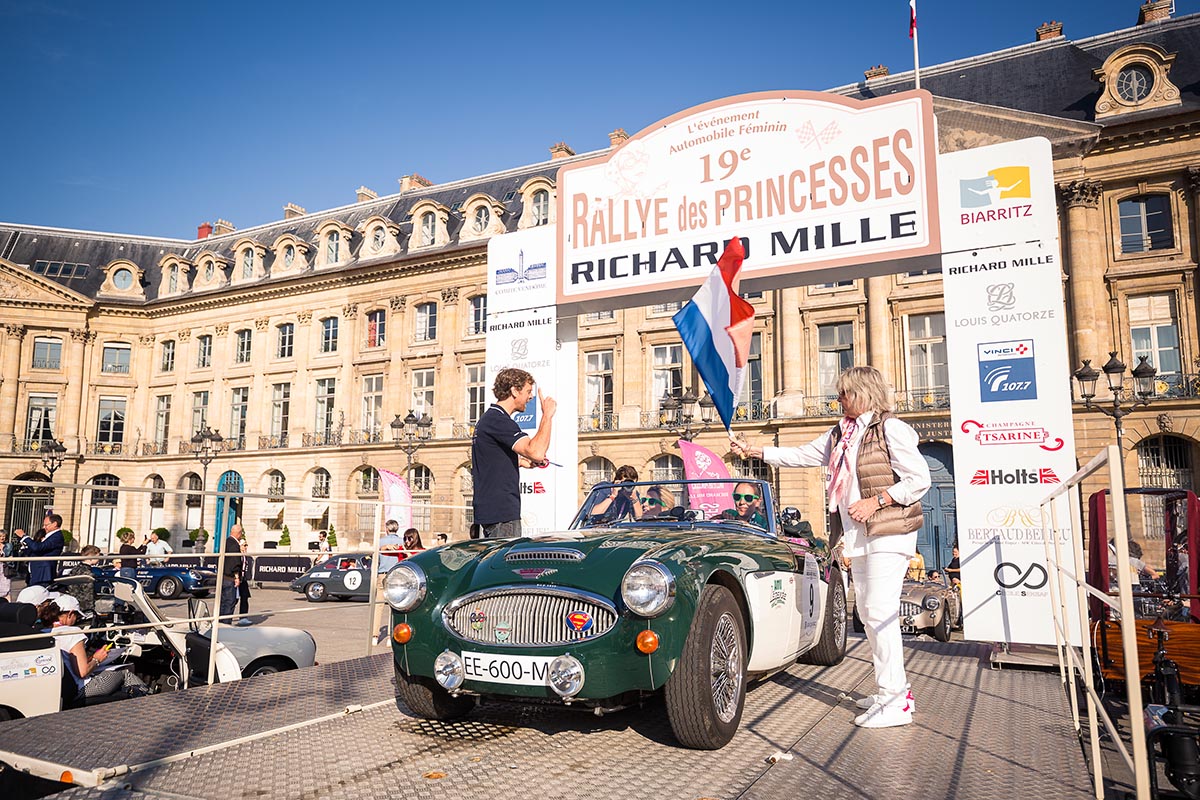 Competitors celebrate a stage during the race

If this all sounds rather like too much grit and nowhere near enough glam, fear not. After a long and bone-aching day behind the wheel, the participants relax in four- and five-star hotels, regaling each other with stories from the road at cocktail parties and gala dinners. This is one car race where evening gowns are an essential piece of kit. And of course, when the weather is rather more clement, it’s hard to beat the thrill of putting the top down, changing up through the gears and feeling the car respond as you hug the roads winding through the beautiful heartland of France. Given this, it’s little wonder that the number of participants has tripled since the Rallye’s inception, with 90 teams taking part last year, more than half of which were first-time entrants. “I wanted to show that women liked to be behind the wheel of beautiful cars and experience a competition full of challenges,” says Zaniroli of the inspiration behind the event. “Women perfectly understood the concept, loved it and spread the word.” She says that competitors come from all walks of life; most are normal women “with kids and a busy job. They want to let go of the routine for a unique week. They want to experience a one-of-a-kind adventure – it’s thanks to their passion and enthusiasm that the rally became so famous and praised.”

It wasn’t always this way, however. Since the second world war, the number of women involved in motorsports has declined and in recent years it has become almost exclusively male, with a somewhat gentleman’s club vibe – think, for example, of Formula 1 with its podium girls. “At the beginning, the Rallye had to prove its worth and differentiate itself to exist in a very masculine automotive environment,” says Zaniroli. “That is why, in order to immediately assert its [authority] and find its place, we wanted it to be sporty, demanding and festive at the same time.” The Place de Vendôme in Paris where the Rallye begins The route below Courchevel

No easy task, but it’s one that Zaniroli and her team have pulled off, an achievement cemented by the endorsement of big-name brands such as Richard Mille, which in 2019 marks its fifth consecutive year as a partner. “Its departure from Place Vendôme in Paris, the finish at the Place des Lices in Saint-Tropez and the presence of dedicated partners like Richard Mille have built its prestige and made it a ‘haute couture’ rally,” says Zaniroli. But her motivation for running the event is not about international acclaim but something rather more personal. “When a woman subscribes to the Rallye des Princesses, their worry is often whether they will be able to do well and represent their team and the classic car they drive – a woman often questions her abilities,” Zaniroli reflects. “I promise them that they will make it, that they will surpass themselves, and on top of that they will make meaningful relationships. On the final line, their joy and pride are always the best reward, for them as well as for me.”

Given such support and camaraderie, it’s no wonder that competitors in the Rallye des Princesses feel like royalty. And although the event is in its 20th year, it shows no signs of hitting the brakes. After 2018’s Biarritz finish, this year it returns to Saint-Tropez, following the historical route that links Paris to the Cote d’Azur. There’s a new challenge for competitors – the Saint-Tropez Grand Prix, a new stage that takes drivers to the Var region inland, punctuated by three regularity zones. “Today, the rally has reached its cruising speed,” says Zaniroli. “We are contemplating varying the route every other year in order to visit other French regions, and we would also like to develop it internationally.” If that happens – and given Zaniroli’s drive and passion, there’s no reason to think otherwise – the Rallye des Princesses’ future success is assured. Ladies, start your engines.